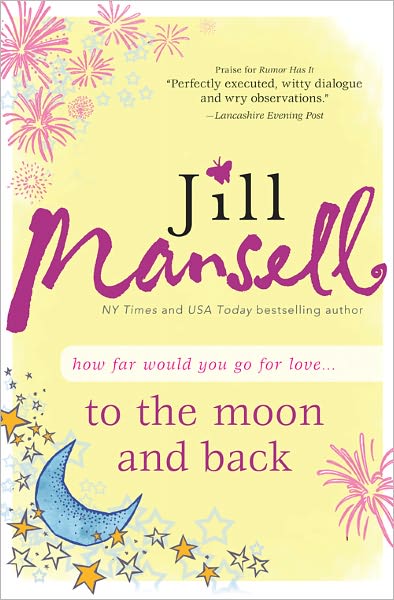 To The Moon and Back is another winner by author Jill Mansell! Her books never fail to draw me in and keep me entertained throughout. I consider Jill Mansell one of my ‘comfort read’ authors and that’s a compliment indeed. She’s one of those authors you turn to when you need a good book and you know for sure that one of hers won’t fail you. In To the Moon and Back, Jill Mansell takes us into the life of Ellie, a young woman who lost her husband in a tragic accident.

Now you may think that is sad and it is but Jill’s novel is not; really it is a novel of hope and this novel is full of so many fantastic characters that it captivates you early on. Almost a year and a half later, Ellie realizes that she has to try to move on even if she really doesn’t want to (the only thing she won’t change are those little conversations she has with her dead hubby). Ellie has always been close with her father-in-law Tony even after her husband’s death but she’s been very reluctant to invite him to her home as it has turned into quite the dump. Tony ends up seeing the place though and promptly moves her into a upscale place in a good neighborhood on the pretense of using the place himself when he’s in town. This is the turning point in Ellie’s life – where the person she used to be begins to reawaken.

Ellie finds herself a new job with a guy named Zack who’s only hope was to find a good assistant who wouldn’t be after him. Well there could be no more perfect job for Ellie than that. The thing is that Zack had, weeks ago, seen Ellie on the street and uncharacteristically for him, seemed to have fallen for her on the spot. When she comes in for the interview he has no choice but to give her the job. He simply can’t risk never seeing her again. For her part Ellie loves the job, loves Zack’s dog Elmo, and just maybe as time goes on be developing a bit of a thing for her boss.

Along with the whole romantic thing going on and not going on with Ellie and Zack there is on the sidelines some other great characters. Roo, Ellie’s friend is simply hilarious. At first she has some issues with always dating the wrong men but as times goes on she begins to see the error of her ways and it was great to see her develop in that way. My favorite character though would have to be Ellie. She was smart and sassy and broken but willing to see what life still had to offer her and go after it. Her heart may always belong to her first husband but she’s willing to open it up again to love. It was fun to follow her through the whole journey she had to take to get to that point.

I think what I like most about Jill’s books is how real they seem to life. The romance seems to flow in a normal and sweet way, the characters feel like your friends, and mostly you feel as though you could walk into the pages of the book and be a part of the story with ease. I became so invested in this story and the people that I didn’t want it to end and, in fact, I kept putting it down towards the end just to draw it out some more. If you like chick-lit that is very well done and more importantly love British writing like I do, then I encourage you to pick up To The Moon and Back. It is a story of love, loss, and the hope that there is something better up ahead if you just go ahead and grab for it! Her books always leave me feeling good about life and we can always use a bit of that in our lives!

Stop by and visit Jill Mansell’s website and To The Moon and Back can be purchased here in the US and here in Canada.

Source: Review copy provided by Sourcebooks. I was in no way compensated for this review.  This review was previously published by me at Book Trib.