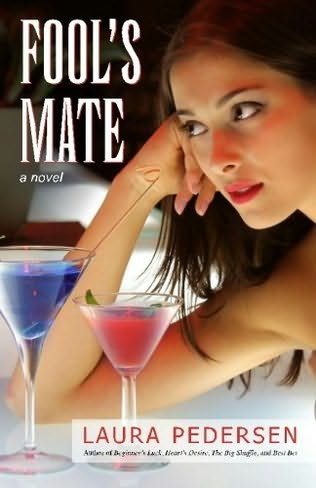 Happy Saturday everyone!  Here in my neck of the woods we finally got that first winter storm so now the snow is here to stay and so is the cold.  Today I’m going to spotlight a book called Fool’s Mate by Laura Pedersen for you all.  I haven’t had a chance to read it yet but it sounds good so when my copy arrives I’ll be picking it up.  In the meantime though I’d love to share what the book is about with all of you and make sure you check out the giveaway at the end of the post.

About Fool’s Mate by Laura Pedersen

Twenty-eight year old Jessie Kincaid aspires to become a star investigative reporter and change the world with her work. To succeed in a cutthroat business, she follows the lead of her male counterparts by acting tough, sleeping around and drinking too much. Underneath this rough exterior beats a passionate heart, untried until Calvin Gabriel Thomas becomes her new officemate. A 30-year-old Yale-trained lawyer, he’s decided to give journalism a try rather than follow in the political footsteps of his famous father, a six-term Senator from Connecticut. Josie and Calvin come from different worlds, have different styles, and hold conflicting views on whether money can be a positive force in society or is the very essence of corruption. However, it’s clear that Calvin might find himself interested in Josie if she weren’t so angry, self-destructive and outspoken. Meanwhile, Josie thinks that she might have given Calvin a shot if he hadn’t gone and gotten married their first week of working together. But when Josie receives the assignment of a lifetime it’s a chance to seal her future as well as find her heart.

Laura Pedersen was the youngest columnist for The New York Times. Prior to that she was the youngest person to have a seat on the floor of the American Stock Exchange and wrote her first book Play Money about that experience, which received a starred Kirkus review and became a bestseller. Laura has a finance degree from New York University’s Stern School of Business.

In 1994 President Clinton honored Pedersen as one of Ten Outstanding Young Americans. She has appeared on shows such as “CNN,” “Oprah,” “Good Morning America,” “The Today Show,” “Primetime,” and David Letterman. She has also performed stand-up comedy at “The Improv,” among other clubs, and writes material for several well-known comedians.

Laura’s first novel, Going Away Party, won the Three Oaks Prize for Fiction. Her short stories and humorous essays have won numerous awards and been published in literary journals and magazines. Her second novel, Beginner’s Luck, was selected by Barnes & Noble for their “Discover Great New Writers” program, by Borders for their “Original Voices” program, and by The Literary Guild as an alternate selection. Heart’s Desire, the sequel to Beginner’s Luck, was also chosen for the Literary Guild. Additional writing includes the critically acclaimed novels Last Call, The Big Shuffle (featured by Target Stores as one of their best books for Fall 2006), Best Bet (a Next Generation fiction finalist), Fool’s Mate, and a collection of short stories called The Sweetest Hours. Laura’s humorous memoir Buffalo Gal (2008) won “Best Memoir” from ForeWord Magazine, an honorable mention for the Eric P. Hoffer book award, and an honorable mention at the New York Book Festival. Buffalo Unbound won the 2011 Indie Book Award in the category of humor/comedy and was an International Book Award finalist in the categories of Travel Essay and Humor.

Laura lives in New York City and teaches at the Booker T. Washington Learning Center in East Harlem. She is a member of the national literary association P.E.N. (poets, essayists and novelists).

I have one copy of Fool’s Mate by Laura Pedersen to share with my readers.  To enter…

This giveaway is open to US and Canadian residents only (no PO boxes) and I will draw for the winner on Saturday, December 10/11.  Good luck!