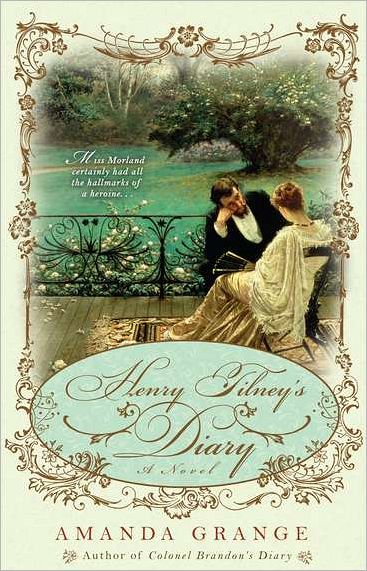 Happy Saturday everyone!  I have another fabulous Austen retelling for you today called Henry Tilney’s Diary by Amanda Grange which is releasing December 6.   I read Mr. Darcy, Vampyre by Amanda Grange a few years back (my review) and I really enjoyed it so I’m really looking forward to reading this one. I just can’t resist mentioning this cover – it is awesome!  If only I could magically appear in that scene myself.  Well let’s see what the book is all about and make sure to check out the giveaway at the end of the post!

Henry Tilney is quite content with his life as a clergyman and is happy to see his older brother Frederick inherit Northanger Abbey. However, Henry’s father General Tilney has other plans. He wishes to increase his family’s means and standing by seeing that each of this three children marries a wealthy partner.

During a trip to Bath , Henry meets the charming Miss Catherine Morland, a fellow Gothic novel aficionado, and believes he has found the perfect wife, though she possesses no great fortune. Henry’s father seems to take a surprising liking to Catherine and invites her to visit the Abbey. But as in the Gothic novels both enjoy, not everything is as it seems.

Amanda Grange was born in Yorkshire and spent her teenage years reading Jane Austen and Georgette Heyer whilst also finding time to study music at Nottingham University. She has had eighteen novels published, including six Jane Austen retellings which look at events from the heroes’ points of view.

Woman said of Mr Darcy’s Diary: “Lots of fun, this is the tale behind the alpha male,” whilst The Washington Post called Mr Knightley’s Diary “affectionate”. The Historical Novels Review made Captain Wentworth’s Diary an Editors’ Choice, remarking, “Amanda Grange has hit upon a winning formula.” Austenblog declared that Colonel Brandon’s Diary was “the best book yet in her series of heroes’ diaries.” Her paranormal sequel to Pride and Prejudice, Mr Darcy, Vampyre, was nominated for the Jane Austen Awards.

I have one copy of Henry Tilney’s Diary by Amanda Grange to share with my readers.  To enter…

This giveaway is open to US and Canadian residents only (no PO boxes) and I will draw for the winner on Saturday, November 26/11.  Good luck!