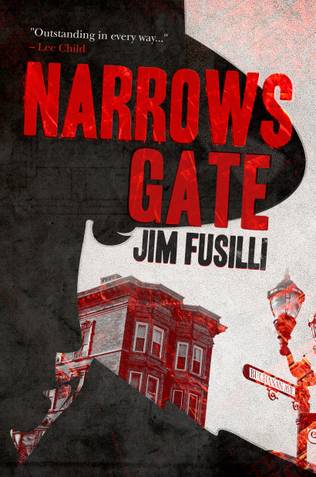 Today I’m spotlighting Narrows Gate by Jim Fusilli which released on November 15.  Now crime novels aren’t my normal genre – if it was a movie though I’d be there.  However this one sounds really interesting so I really wanted to be able to share it with my readers who love this type of book.  Let’s see what Narrows Gate is about and be sure to check out the giveaway at the end of the post.

About Narrows Gate by Jim Fusilli

NARROWS GATE is an epic novel that follows three men as their lives intersect with the dangerous and seductive power of the mob in a gritty Italian-American neighborhood in the shadow of Manhattan (a fictionalized Hoboken) during the first half of the 20th century.

Narrows Gate, NJ is a dangerous and corrupt city run by brutal gangsters and crooked officials. Sal Benno is a neighborhood kid who has never cared much for school, but has always been fascinated by the local wise guys. His best friend, Leo Bell, is quite the opposite—a terrific student with a bright future ahead of him, he can’t wait to escape Narrows Gate and its Mafia ties. When Sal starts doing favors for local gangsters, Leo fears for his friend’s safety as these new connections make him privy to dangerous and incriminating information. As Sal gets pulled into the Mafia’s inner circle, Leo sticks by him, all the while harboring a dangerous secret that could either keep Sal alive—or bring his life to an abrupt end. In the middle of it all is Billy “Bebe” Marsala, a hugely popular and handsome crooner, hell bent on success and fame. Originally from Narrows Gate, the Mafia has always had a hand in his career, but when a mob war breaks out with Bebe caught between factions, his fate, and that of Sal and Leo, hang in the balance.

Jim Fusilli grew up in Hoboken and learned about the mob as a kid through hearing stories in the neighborhood and later, from his work as a Teamster. “Hoboken was a rough town back then and I was a Teamster while I was in college,” Fusilli says. “The guys I worked with told stories of their childhood, which is the era in which much of the action of NARROWS GATE takes place. They gave me a sense of what it was like.”

A novel that rekindles the spirit of such groundbreaking works as Mario Puzo’s The Godfather and Budd Schulberg’s On the Waterfront, NARROWS GATE is an expansive and vivid read that explores the inner workings of an East Coast mob and how it influences the societal culture around it.

Jim Fusilli is the author of five previous novels and wrote a series of short stories between 2006-11 that are all set in Narrows Gate and served as the early inspiration for his new novel. They include “Chellini’s Solution,” which appeared in Best American Mystery Stories; “Digby, Attorney at Law,” which was nominated for an Edgar Award by the Mystery Writers of America; and “Kitten,” which is featured in the December issue of Alfred Hitchcock Mystery Magazine.

I have one copy of Narrows Gate by Jim Fusilli to share with my readers.  To enter…

This giveaway is open to US and Canadian residents only (no PO boxes) and I will draw for the winner on Saturday, December 17/11.  Good luck!