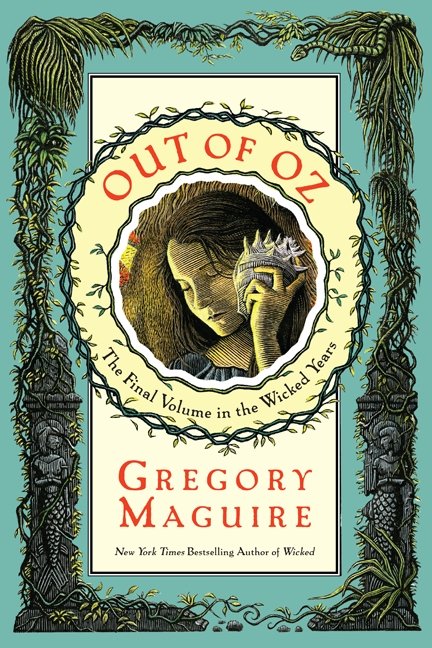 Today is the release date for the final volume in the Wicked Years: Out of Oz by Gregory Maguire!  I’ve read the first few in the series but have the last couple to catch up on.  I was quite taken with the series when it started but somehow I didn’t get back to it.  That is going to have to be remedied I think!  Today I’m going to share a bit about the book with you and be sure to check out the giveaway at the end of the post as well!

About Out of Oz by Gregory Maguire (from HarperCollins)

Hailed as “bewitching,” “remarkable,” “extraordinary,” “engrossing,” “amazing,” and “delicious,” Gregory Maguire’s Wicked Years series—a sophisticated fantasy cycle inspired by the classic children’s novel The Wizard of Oz—became national bestsellers and the basis for a hit Tony-winning Broadway musical. Now, Maguire returns with the final installment in his transformative work, a thrilling and compulsively readable saga in which the fate of Oz is decided at last. . . .

Once peaceful and prosperous, the spectacular Land of Oz is knotted with social unrest: The Emerald City is mounting an invasion of Munchkinland, Glinda is under house arrest, and the Cowardly Lion is on the run from the law. And look who’s knocking at the door. It’s none other than Dorothy. Yes. That Dorothy.

Yet amidst all this chaos, Elphaba’s granddaughter, the tiny green baby born at the close of Son of a Witch, has come of age. Now it is up to Rain to take up her broom—and her legacy—in an Oz wracked by war.

The stirring, long-awaited conclusion to the bestselling series begun with Wicked, Out of Oz is a magical journey rife with revelations and reversals, reprisals and surprises—the hallmarks of the unique imagination of Gregory Maguire.

Buy Out of Oz at aAmzon.com or Amazon.ca

About Gregory Maguire (from HarperCollins)

Gregory Maguire is the author of six novels for adults and more than a dozen novels for children.

Wicked was developed as a big-budget Broadway musical, with music and lyrics by Stephen Schwartz (Godspell, Pippin, The Prince of Egypt, etc.), book by Winnie Holzman (My So-Called Life, etc.), and direction by Joe Mantello (Tony Award–winning director for Take Me Out). The original cast recording, released in December 2003, features performances by Kristin Chenoweth, Joel Grey, and Idina Menzel.

Confessions of an Ugly Stepsister was filmed for ABC/Disney and aired originally in the spring of 2002. It starred Stockard Channing and Jonathan Pryce.

Maguire’s work for adults and for children has been published abroad in England, Ireland, and Australia, and various works..

I have one copy of Out of Oz by Gregory Maguire up for giveaway to US residents only.  To enter…

This giveaway is open to US residents only (no PO boxes) and I will draw for the winner on Saturday, November 19/11.  Good luck everyone!