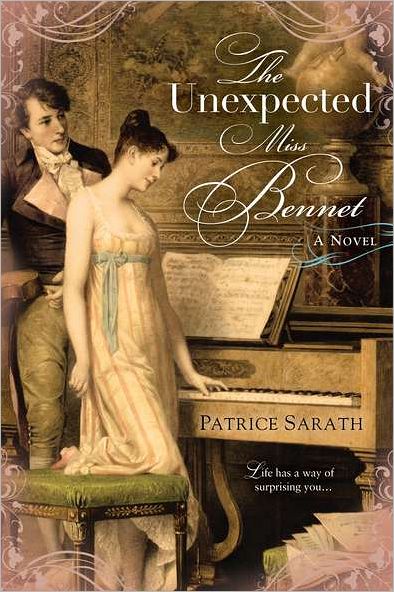 Lately my interest in Austen retellings has really been growing so you’ll probably start to see a few reviews of them here and there.  When The Unexpected Miss Bennet by Patrice Sarath, releasing on December 6, caught my eye I knew I wanted to read it.  My copy arrived the other day and I have to say that I really love the cover – it’s even more gorgeous in person.  I just adore the old fashioned feel to it.  Today I’m going to share with what the book is about and make sure to check out the giveaway at the end of the post as well!

About The Unexpected Miss Bennet by Patrice Sarath

Patrice Sarath’s charming Regency novel THE UNEXPECTED MISS BENNET tells the story of the sweet but rather unremarkable Miss Mary Bennet, the third of five Bennet daughters made famous in Jane Austen’s Pride and Prejudice.

Unlike her sisters, Mary Bennet is just short of pretty and though she is learned in Fordyce and more or less adept at playing the piano, few in society expect a respectable gentleman to court the third Bennet daughter. While she is shy and would much rather keep her nose in a book, a series of events raises a question that haunts Mary: will she meekly follow the path to spinsterhood set before her?

Determined that Mary should have a chance at happiness, the elder Bennet sisters scheme and plan to find her a proper gentleman. Lizzy invites Mary to visit at Pemberly in hopes that her sister will flourish. But only when Mary finally learns to strike out independently can she truly be accomplished in her own right. And in a family of extraordinary misses, ordinary Mary may turn out to be the most wholly unexpected of them all.

I’m a writer and editor in Austin, Texas. My first novel, Gordath Wood, came out from Ace in the summer of 2008, and the sequel, Red Gold Bridge, in 2009. Gordath Wood is hard to categorize. It’s fantasy but with only a touch of magic to it. It has romance, but is not a romance (a very different beast). It has a murder-kidnap mystery in it. Basically it has all of the elements of books I like to read. And although everybody has different tastes, I am betting that more than a few of you also like your books the same way I do — shaken and stirred. So if you like fantasy-mystery-romance novels, this one’s for you.

Oh yeah, it also has horses in it. Lots and lots of horses.

Like most writers, I have a day job. In my case, I am a business and industry editor for Hoover’s, Inc. During the day, I write about the mundane and yet still fascinating world of business and commerce, specifically in the financial and construction industries. At night, I switch hats and write fantasy and science fiction.

I have one copy of The Unexpected Miss Bennet by Patrice Sarath to share with my readers.  To enter…

This giveaway is open to US and Canadian residents only (no PO boxes) and I will draw for the winner on Saturday, November 26/11.  Good luck everyone!