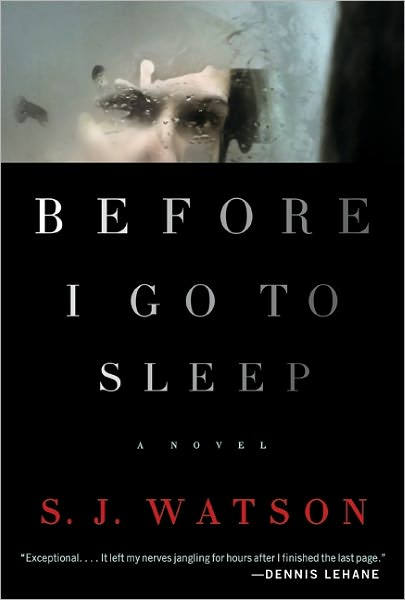 Can you imagine waking up each morning having no clue where you are not to mention having no ability to remember anything from the previous day, weeks, or years? Well that is Christine’s life. During the day she can accumulate and remember things but as soon as she goes to sleep for the night, they are gone. This is all due to an accident she apparently had although she has no memory of it but it left her with a severe brain injury. Her husband Ben (who she doesn’t remember either) tells her each morning about their life together and what had happened to her.

Before I Go to Sleep by S.J. Watson is a fantastic psychological thriller that completely held me in its grip from the first page. When Christine awakens in the morning she figures she’s still in her 20’s so imagine her surprise when she looks in the mirror and instead sees a 47 year old woman. One day after Ben leaves for work, Christine discovers another cell phone ringing in her purse. It turns out to be Dr. Nash who has apparently been helping her but this turns out to be something she has hidden from Ben because he’s never been too enthusiastic about her getting help. Dr. Nash reminds Christine to read the journal he has suggested she keep and then they meet afterwards. He repeats this process every day. One day when Christine pulls the journal out she sees some words that terrify her… ‘Don’t trust Ben’. What could this mean? Ben is her husband. He takes care of her. Why shouldn’t she trust him?

Yet as she reads her journal she notices all the inconsistencies with what Ben tells her and what Dr. Nash tells her. You see Christine keeps having flashbacks to times in her past before the accident. When this happens she sits down and tries to make sure she gets it down in her journal. As times goes by she begins to piece together her past and what ultimately happened to her that fateful day of her accident. What she uncovers terrifies her!

The author has done an incredible job of writing in this novel. He builds up our excitement as every day Christine discovers something new and yet we know the next morning it’ll all be gone. The mystery and suspense kept me on the edge of my seat. I had some idea of what was going on but as the mystery and events of Christine’s past unfold; I was at times shocked and at others viciously angry at some of the characters in the novel. Towards the end of the story the plot thickens and culminates in an exciting conclusion that left me completely satisfied.

I really enjoyed Before I Go to Sleep by S.J. Watson. It is his debut novel and it is a fantastic one. I certainly look forward to more of this author’s work in the future. For now I would certainly recommend this novel to my friends!

Source: My personal copy. Review first published on Book Trib as part of the Review Crew.