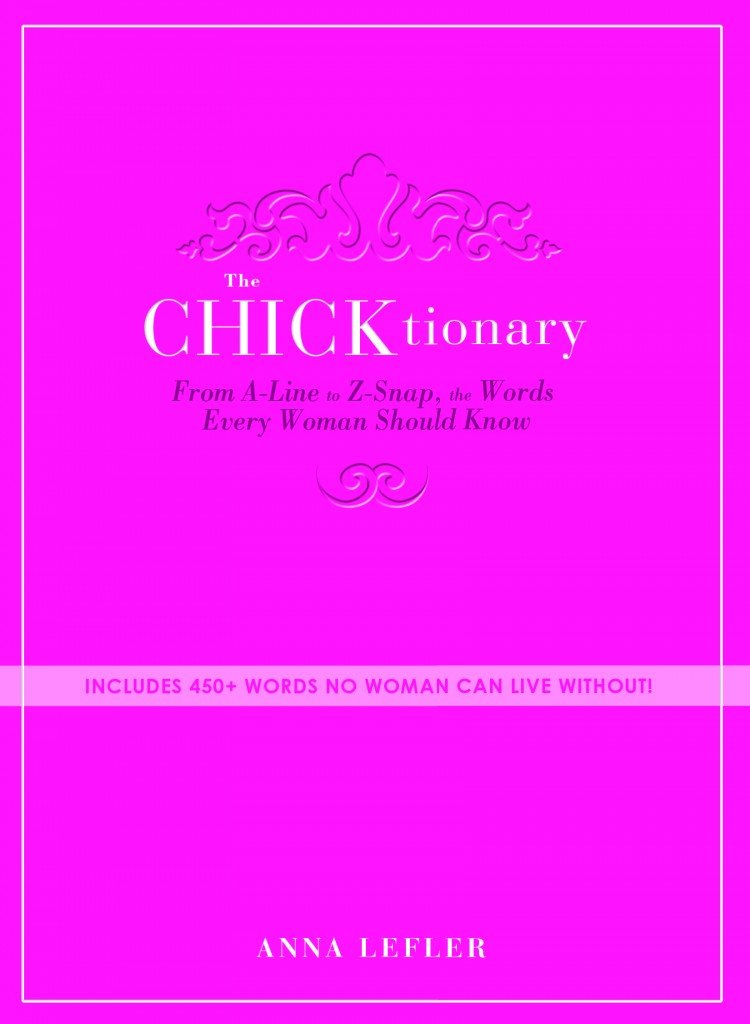 Do you need cheering up?  Do you feel the need to bust a gut laughing while trying hard not to pee your pants?  Well then I’d say that The CHICKtionary: From A-Line to Z-Snap, the Words Every Woman Should Know by Anna Lefler is a must read for you!  This extremely entertaining gem includes more than 450 words that no woman can live without!

Anna lists words from A to Z that the woman of today should know and I thought that I was pretty tuned in and up to date on most words out there that we women like to use but this book surprised me with a few new ones and amused me thoroughly with the definitions on the ones I did know.  As women we already have our own special language that men have no part of but with this book the possibility are endless and will have you adding many more to your list.

The definitions in this book are hilarious and some are even eye-popping but I don’t think I found one that didn’t cause me to smirk or laugh out loud.  Here are just a few that I found funny…

Butt Bra, noun:  Any of a variety of harness-like undergarments that use straps, elastic, or strategic openings to hoist your derriere to an altitude believed to be more attractive and appealing.  Surely one of the more ingenious and hardworking items to be found in your underwear drawer (see also: foundation garment), the butt bra works on the same principle as the push-up bra, but instead relies on a “pulling” effect to lift and optimally position the butt cheeks.  While the quest for further advancements in the field of butt-enhancement continues, the butt bra currently sits on the frontier of rump-perkiness technology.  (page 28)

Panticlimber, noun: Also known as a “parade float”, this is a term for a pantiliner that, for one reason or another, has come unstuck from its assigned spot in the crotch of the panties and has meandered upward into a new, nonapproved location.  The release of a panticlimber is often the result of strenuous athletic activity such as basketball or volleyball.  The adhesion of the beached pantiliner to the skin in its new location can cause considerable discomfort, the symptoms of which can include a marked decrease in athletic performance, repeated attempts at clothing adjustment, and a noticeably altered gait. (page 148)

Then there are these cute little funfacts like this one:  Playful by nature, tampons love to leap out of your purse when you least expect it, especially when you are trying to find your wallet and pay the gorgeous actor/cashier for your say latte. (page 192)

So, you see what I mean…these are just funny and there are tons of them in this book.  Then there are others that the name alone makes me giggle such as Banana Hammock, Basset Knees, Dude Biffle, and Freeway Face.  We’ve also got the common ones like Fat Pants or Does This Make Me Look Fat?  We all have had experience with asking that loaded question of our poor unsuspecting other half.  And as I said there were ones that had even my eyes popping a bit – who knew you could die your pubic hair?  Well, I didn’t and geez, why would anyone want to?  LOL.

The Chicktionary is a fun and easy book to read.  It’s a book I would likely leave out on the table depending on the company I was going to have.  I imagine there are some people who could be offended by the descriptions in the book so if you’re one of those then the book isn’t for you but if you’re an easy going person with a good sense of humor, then give this one a try.  It’s guaranteed to give you more than a few chuckles.

I read The CHICKtionary by Anna Lefler for her book tour with TLC Book Tours.  Be sure to check out what others on the tour thought of the book.  You can also find Anna on her webiste and blog.  If you’d like to purchase your own copy of The Chicktionary, you can do so here in the US and here in Canada.  Be sure to pop by tomorrow though as Anna will be joining us with a guest post and a giveaway of her book!

Source: Review copy provided by TLC Book Tours and the Author. No compensation was received for this review.