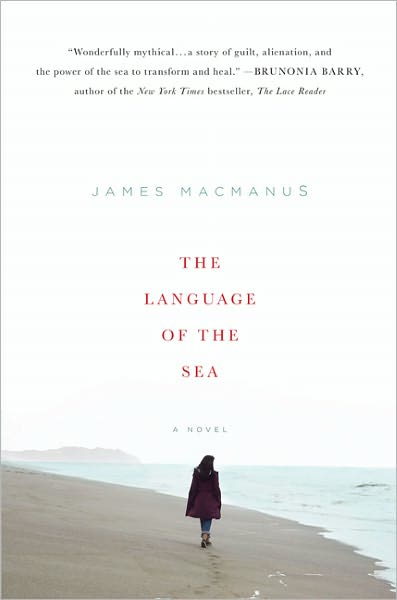 The Language of the Sea by James MacManus is a novel that takes you on a journey between what is real and what is not or is it? I began reading this book wondering if this was really something I would like because it started out slowly for me but within a short while I was captivated by Leo Kemp’s life and knew I had to find out more about this man’s thoughts on the sea and the life within it.

Leo Kemp is a marine biologist who teaches and lives with his wife and daughter on the beautiful Cape Cod. The big thing to understand about Leo is his absolute fascination with seals – how they communicate and how they live. Another thing about Leo is he is very outspoken on things he believes in and has more than once publicly questioned the policies at the Institute where he teaches. Finally, he is fired because of this. He had a field trip planned with his students though and he decides that there is no reason for them to miss it so he takes them out anyway.

While out on the tugboat with his students a storm blows in and Leo ends up being thrown overboard. The big question is does he want to be found? His career is in a shambles and his marriage certainly isn’t much better. As Leo struggles to get to shore or at least safe he begins to notice the seals around him. He watches them and listens and soon enough he begins to swim with them and live with them and they slowly begin to recognize him as one of their own. In Leo’s mind this is a dream come true and he struggles to understand whether he is alive or maybe he’s died. Either way he would like nothing better than to spend the rest of his days living as a seal. This seems to be turning out to be the perfect escape for a man who was none too happy with the way his life was going anyway and Leo really has no intention of giving up the freedom he has found.

I loved the writing in The Language of the Sea – the almost dreamlike and mystical quality to Leo’s life when he’s with the seals. I loved all the information that the author provided on sea life and seals in particular. There was definitely a lot I didn’t know and I found it really interesting in that respect. As for the characters I didn’t feel particularly drawn to any of them; it was more the story itself that drew me in with this one. This story is really one I may have considered outside of my comfort zone but I enjoyed it and once I got past the initial slowness in the beginning I had a hard time putting it down until I reached the end which I’ll just say surprised me just a little!

If you’re at all interested in sea life or seals in particular you would likely enjoy this book. Or if you simply like a novel that is thought provoking and a little different than usual, then you should consider giving The Language of the Sea a try. I was pleasantly surprised by how much I ultimately ended up enjoying this novel!

Source: Received for review from Book Trib and was first published here on Book Trib. No compensation was received for this review. All opinions are mine alone.