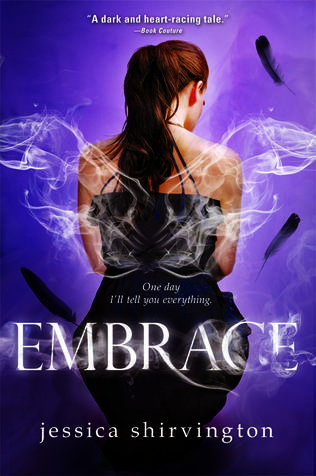 Embrace by Jessica Shirvington is being released on March 1, 2012 in the US and Canada by Sourcebooks Fire and today I’m posting the gorgeous cover for you all!  I’m also going to tell you a bit about the book and all that good stuff.  I’ve got my copy but I’m waiting to review it all for you towards the end of February which will be just in time for its release.  In the meantime, take a look at this cover and book – it sounds like a fantastic story and I can’t wait to read it!

About Embrace by Jessica Shirvington

Violet Eden is dreading her seventeenth birthday dinner. After all, it’s hard to get too excited about the day that marks the anniversary of your mother’s death. The one bright spot is that Lincoln will be there. Sexy, mature and aloof, he is Violet’s idea of perfection. But he’s never given a hint of wanting to be more than just her friend and kickboxing trainer.

That night he gives her the world’s most incredible kiss — and then abandons her on her front doorstep. Violet is determined to get some answers, but nothing could have prepared her for Lincoln’s explanation: he is Grigori — part angel and part human — and Violet is his eternal partner.

Without warning, Violet’s world is turned upside down. She never believed in God, let alone angels. And now she’s supposed to accept that she’s some mythological soldier protecting humanity from heaven’s exiled angels? And sacrifice all of her hopes for a normal life forever?

But there’s no denying the strange changes in Violet’s body…or that Lincoln has betrayed her. He had a plan for meeting her, getting to know her and training her — without ever telling her the truth. How could she ever trust him again?

Enter Phoenix. He’s intense and enigmatic, but at least he never lied to her. As an Exile, he is not to be trusted, yet he’s the only one there to pick up the pieces and protect her after Lincoln’s lies. In a world of dark and light, he is all shades of gray. And he’s inspiring feelings that might just push her over the edge.

As Violet gets caught up in a world where angels seek vengeance and humans are warriors, she must choose her path. She’s always been strong, but will she be strong enough? Lincoln vs. Phoenix. Angel vs. Exile. Which will she…Embrace? 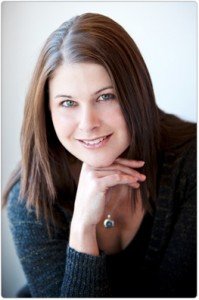 How many of us can say we fell in love at seventeen? A lot of us. But how many of us stayed in love? Jessica Shirvington has been lucky enough to meet and marry the man she fell in love with at seventeen. Born and raised in Sydney, Australia, Jessica is married to former Olympic sprinter, five-time National 100m champion, and current sports personality with Australia’s Foxtel and Sky News, Matthew Shirvington.

Married for almost eleven years with two beautiful daughters, Sienna and Winter, Jessica believes her early age romance and its longevity has definitely contributed to how she tackles relationships in her YA novels.

At age nineteen, Jessica opened and managed her first restaurant in Sydney, and then, while she and Matt were living in London, founded a fine food import and distribution company, Stella Imports, in 2003.

Moving back to Australia and searching for a creative outlet after the birth of her second child, Jessica started on her path to writing. Although a long-time lover of creative writing and poetry, Jessica had never considered the possibility of making writing her career. But with some time away from work, she finally had an opportunity to explore her potential. The result is her debut novel, EMBRACE, which marks the start of Violet Eden’s story.

Jessica says: “Writing EMBRACE was an amazing journey for me. Discovering Violet and the other characters in the book has been my delight. The first draft just came together so quickly. I remember starting one day and then, six weeks later I was looking at something that had the makings of a book (I hoped). It took plenty of re-drafts but that, along with the copious amounts of research, the editing, proofing, all of it, has been such an awesome experience.”

Jessica still marvels at how everything came together; describing that time in her life, she says: “It’s totally clichéd, I’m almost cringing saying it — I guess I always thought I would have a corporate career and I was headed that way but life had other plans for me. When I wrote EMBRACE I had no idea it would turn into a published book, let alone a series — it all kind of snuck up on me and I’m so grateful. What they say is true…sometimes you just fall into the thing that is meant for you. I’m lucky, I didn’t just fall, I catapulted. Now, I can’t imagine doing anything else.”

When asked why she chose to write young adult fiction, Jessica says: “I never considered writing anything other than YA. The reason is simple — they’re the books I choose to and love to read myself. YA books have the amazing opportunity to be there for a character’s ultimate turning point — to be there for the moments that will shape their adult future. That makes them really special.”

EMBRACE is now (or soon to be) available in the U.S., UK, Australia, New Zealand, Germany, Brazil and Turkey.

Oh my, this sounds like a story I’m really going to like!  I’m anxious to read it right now but I’ll wait and resist the urge.  It’s also the first in a series and I’m such a sucker for a good series to sink my teeth into.  I hope you’ll all check out the great website for Embrace and the sample chapters and all that good stuff.  This promises to be a good book!  Keep an eye out for my review coming in February.