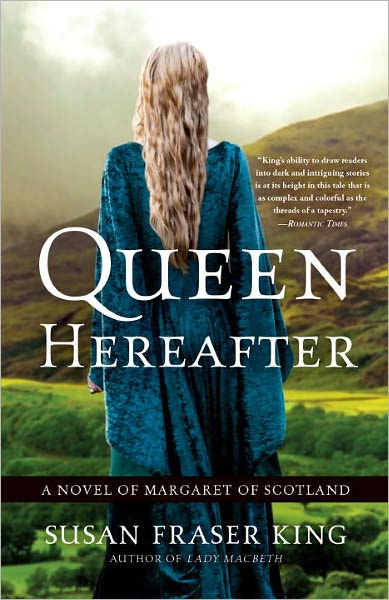 Let’s all welcome Susan Fraser King, author of Queen Hereafter, to Peeking Between the Pages.  I haven’t had a chance to read this gem of a book yet but it is on my nightstand.  Isn’t that a beautiful cover though?  I remember seeing it when it first came out and thinking wow and I still do!  Susan joins us today with a guest post and giveaway to celebrate the paperback release of Queen Hereafter.  Enjoy the post that Susan has prepared for us on her inspiration and the research that went into the making of Queen Hereafter…

When an author sets out to write a book, precious little writing tends to get done at first. With the first surge of creative ideas, I usually get a few chapters down, but before the rest of the book can be drafted (let alone finished!) there are ideas to brainstorm, research to do, outlines to scribble, endless pages to fill…a keyboard about to take a beating, and tons of thinking to do. And none of it gets going without a strong initial idea and concept.

That’s how I went about writing Queen Hereafter: A Novel of Margaret of Scotland. There was so much historical information about this medieval queen, facts to spin into fiction. Margaret—princess, refugee, queen and later saint—is that rare medieval figure with an actual, factual contemporary biography, written by her personal confessor, Bishop Turgot, a man who clearly admired and loved her. What a gold mine for a historian or a writer! Turgot, who idealized his beloved friend, provided the basis of our historical knowledge of a fascinating medieval queen–and the basis of the mythology that has grown around her.

To write the novel, I would need to work forward and backward at the same time—piecing together facts to create fiction, unraveling the idealized Margaret to find the real person within. The challenge was to make her a real young woman rather than just saintly and perfect.

The romantic, idealized version is lovely in and of itself, especially because her story is grounded in solid historical fact. Aside from her political, social and historical significance, the real Queen Margaret of Scotland, who married Malcolm Canmore in 1069 when she was a very young woman, proves that true love does indeed exist—and proves that not all royal marriages were simply convenient.

Here’s an excerpt from the author’s note in Queen Hereafter – it seems nicer, in a way, to introduce the good Queen Margaret of Scotland with her medieval fairytale, rather than just her medieval facts:

A princess, eldest child of an exiled prince and an exotic noblewoman and raised in a pious royal court, sails with her family to the land of her father’s birth and the throne promised there. The father dies within a week of arriving, possibly poisoned, and his widow raises their children alone—two princesses and a small prince who is to inherit the throne. When the aging king dies a decade later, his enemies invade and the royal family must flee. Sailing over raging seas, they are shipwrecked along a northern coast belonging to a barbarian people.

That king, known to be a brute warrior, offers the fugitives sanctuary; he soon falls in love with the eldest princess, requesting her hand in marriage. Devout, educated, a beautiful young creature of a virtuous and charitable character, the princess intends to become a nun. But for the good of all she is persuaded to marry the warrior king.

Their marriage of near opposites produces eight healthy children—six boys and two girls—and the queen works tirelessly to bring charity, genteel culture and religious reform to her adopted nation, earning the love and trust of the people. The king and queen adore one another: she teaches him to read and turns his plain fortress into a palace; he translates for her when she lectures his foreign priests on theology; she feeds orphans with her own golden spoon and establishes a free ferry for pilgrims; she steals the king’s gold to give it to the poor and releases his ransomed prisoners and he affectionately calls her his little thief. He orders a cover of precious metal and gems made for her favorite old book; he adores her, and she loves him, their children and her faith more than life. Their enduring affection for one another is widely respected and admired.

Many years later, the king is killed in battle and the queen dies of heartbreak within days. Their royal dynasty lasts generations; the queen is declared a saint by her descendants; the king is immortalized in literature, and their memory is still revered today.

Fairytales and romance, indeed—yet this is Margaret and Malcolm’s true story in a nutshell, handed along by generations of historians and supported by medieval documents. Historians know a good deal more about them now, but their romantic story remains a solid foundation beneath both new and accumulating facts. The story of Margaret and Malcolm is a tale of a beauty and her beast, two people who changed the course of Scottish, and medieval, history. 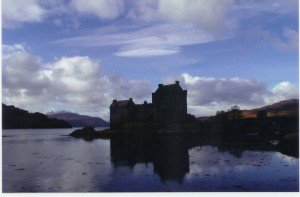 Queen Hereafter is now available in trade paperback and ebook from Broadway Books and Random House, and is also an audiobook from Audible.com. I hope you will love her story!

Thank you so much for this guest post on Queen Hereafter, Susan.  I always like to learn what goes into the making of a novel.  I’m looking forward to reading it!

In QUEEN HEREAFTER we meet Margaret, a young Saxon princess forced into exile upon the death of her uncle, the English king. While fleeing the country from Norman invaders, she is shipwrecked with her family on the coast of Scotland where the recently widowed King Malcolm Canmore offers them sanctuary. Malcolm’s kindness, however, is not without motive. In Margaret he sees a political prize and so he promises to help her brother, the outlawed rebel Edgar of England, in return for his sister’s hand in marriage.

Despite their less than ideal beginnings, Margaret and Malcolm come to love and care for one another. Their marriage, a challenge at first, evolves, while Margaret steps wholeheartedly into the role of queen, immediately setting out to improve the lives of her people. However, tensions with the northern Scottish kingdom, ruled by the conniving Lady Macbeth, escalate and put Malcolm on edge. To ensure Lady Macbeth’s good behavior, the king brings Eva, a female bard and Macbeth’s granddaughter, to court as a hostage. While Eva expects to dislike and resent Margaret, the two discover an unlikely bond as outcasts of a sort—Eva as a wild Celtic spirit captive among her enemies and Margaret suppressing her passions as she endures increasing pressure as a queen and a mother of princes. Eva must betray the king and the new queen, however, in order to honor her devotion to her kinswoman and former monarch. Torn between loyalties, will Eva betray the queen she has always known—or the queen she has come to love? 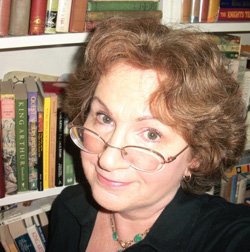 With graduate degrees in art and art history, former college lecturer Susan Fraser King is the author of Lady Macbeth and several other novels praised for poetic style and historical accuracy. Raised in upstate New York and a frequent visitor to Scotland, she lives in Maryland with her family.

I have 2 copies of Queen Hereafter by Susan Fraser King to share with my readers.  To enter…

This giveaway is open to US and Canadian residents only (no PO boxes) and I will draw for the winners on Saturday, December 31/11.  Good luck!