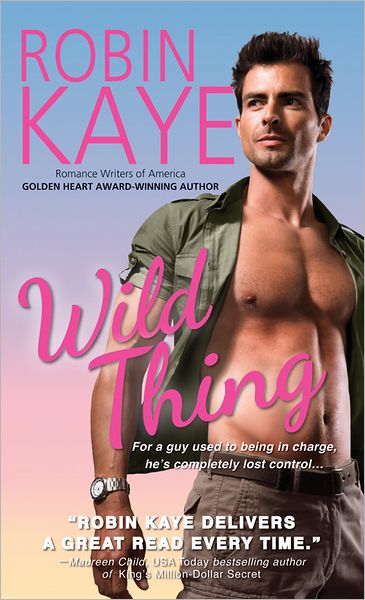 Welcome to Peeking Between the Pages Robin!  Wild Thing is Robin Kaye’s newest novel and it’s a good one!  I posted my review of Wild Thing yesterday and it’s another fun and easy read from Robin.  I’ve read all of her books so far and there hasn’t been one that I haven’t enjoyed.  Wild Thing came at the perfect time because I really didn’t want anything heavy to read.  I wanted something that would entertain me and that’s exactly what I got!  I hope you’ll all enjoy the interview that Robin and I put together for you…

Having just finished Wild Thing I can attest to it being yet another really great novel from you! Would you like you tell us a bit about it?

When Hunter finds Toni’s book on how to marry the man of your choice, he studies it as a joke. Before long Hunter realizes he’s never cared enough for a woman to bother working this hard to get her. But the last man in the world this city girl wants is a Survivor Man wannabe…

You always seem to write about strong female characters which I like. Is this your intention with every book?

RK:  I write about women I would like to be friends with. I end up spending so much time with my characters, writing weak or whiney women would drive me to drink. Besides, I have to be able to walk a mile in their shoes and relate to them on some basic level. I also think that strong, smart women are infinitely more interesting than your run-of-the-mill character, and those character traits when taken to the extreme make for a lot of conflict. I read a lot of reviews where my heroines totally tick people off with their strength and independence. It’s a double-edged sword. Readers and reviewers tell me they’d like to give them a good shake. I choose to think that it’s a good thing—the readers are invested enough in my characters to get angry with them. My characters are far from perfect, but in my estimation, that makes them more real—sometimes irritating, but real.

I love the Kincaid brothers! Will there be more books featuring them? Or maybe Karma? I just love her and her mischievous nature!

RK:  Fisher’s book, Call Me Wild, should be out in August or September. I don’t have a hard release date yet, but the book is in copy edit, and I have to say, Karma really shines in this one. Trapper’s book will be next and then we’ll see about Karma. I’m so looking forward to seeing Karma get hers!

Are any of your characters based on people you actually know?

RK:  I guess there are little pieces of people I know in my characters. I’m basically lazy so I tend to give my characters the careers of people I know so I can fact-check easily. Right now I’m writing the first book in a new series that takes place in the Red Hook section of Brooklyn. My hero is a marine architect—it helps that one of my good friends is one as well. Storm Decker is nothing like my friend Kevin Dibley, but emailing Kev to get the answers to my questions is a lot more fun and faster then searching the internet. My only problem is the time difference between Maryland and Auckland, NZ.

The Domestic Gods Gone Wild series—Wild Thing, Call Me Wild, and Something Wild all involve the Kincaid family and take place in Boise or the mountains of Idaho.

So Robin, I know you love to write – you must to create such fun books, but can you tell us a bit about yourself outside of your writing career?

RK:  I’m a coffee addict, a mother of three teenagers, and I’ve been married to a domestic god for twenty-two years. I love to knit, spin, and weave, though I haven’t had much time to do any of the above because I’m usually under tight deadlines. Between taking care of the kids, running them around, and writing, I don’t have much time for anything else.

Where do you get your inspiration for your novels? I love how you’ve weaved so many of the stories together in one way or another.

RK:  I think when you’re a writer, you hear things and tuck them in the back of your mind. I remember going to Atlanta, Idaho years ago. Atlanta is an old ghost town and the man I worked for built a church up there for the 10 – 15 residents. My husband and I went up with him one weekend, and I found an old miner’s diary written in the 1890’s. I read it and was fascinated by the story of three whores who worked the Atlanta mine and another mine which was just over the mountain pass. The ladies would follow the money, so when there was a payday they’d cross the pass to work the other mine. One spring day, they were crossing the pass when a freak spring blizzard hit. Anne and Dutch Elm froze to death before the miners were able to find them, Annie had her dog with her, and her dog kept her warm enough so she only lost her leg to frostbite. The men piled Anne and Dutch Elm’s bodies on a toboggan and did their best to slide them down to Atlanta, but they ended up losing control on the steep terrain and the toboggan fell into the raging river never to be seen again. Supposedly, they got Annie down to Atlanta safely, and one of her customers made her a peg leg. She was known as Peg Leg Annie after that. I must have read that story twenty years ago, but I never forgot it. When I wrote Yours for the Taking, I called the town where Ben’s ranch was Three Whores Bend and was able to use the story in the book. It worked so well because Gina’s mother worked in the sex trade and when she found out about the story, it really brought a lot of her inner conflict to the surface.

What do you find most challenging or rewarding about writing your books or even just writing in general?

RK:  Deadlines are a challenge. I’m so busy with three kids (all of which have been sick for the last month) it’s hard to schedule writing time around my commitments to them. Of course I don’t have average kids, one spent the last 13 years pursuing a career in professional ballet, all three have pretty severe learning disabilities, and my youngest has physical disabilities and health problems. I’ve home schooled and driven the ballerina to dance 180 miles a day for two years before at the ripe old age of fourteen she moved away from home to dance and go to a real school. I’ve juggled sports, special edrequirements, surgeries, and running to doctors halfway across the country all the while knowing I have deadlines. I would love to schedule writing time, but inevitably real life happens and I feel as if I’m back to running on a hamster wheel.

Writing—when I’m in sync with my characters and the words are flowing is some of the most rewarding times of my life. I was writing the other day, sitting at Starbucks and grinning like an idiot. I fall in love with my characters and when they’re having a great time, I usually am too. I was writing a scene between my hero Storm and his foster sister, ten-year-old Nicki. They only met recently and Storm has no idea what to do with little girls. The two of them together are precious. When I read the scene the next day, I was sighing. I love when that happens. Unfortunately, it doesn’t happen often enough!

I have to say Robin, I’ve never been much of a romance fan in what I read but from the very first romantic comedy of yours that I read I was hooked. You fast became a favorite author of mine. What are your favorite books or authors?

RK:  Thanks. I like books that help me escape. Christie Craig is a favorite of mine because she’s hysterically funny. Susan Donovan, Donna Kauffman, Rachel Gibson, Patti Berg, Susan Elizabeth Philips, Maureen Child, Gemma Halliday, Diane Kelly, and the rest of my blog-mates on Killer Fiction, Roxanne St. Claire, Lori Wilde, and GraceBurrowes—gosh, I know there are more, but that’s all I can think of at the moment…

Finally, what’s next? Are you currently working on a new novel for us?

RK:  Always! Right now I’m working on the first of a three book series for NAL—the Bad Boys of Red Hook. The working title is After the Storm. After I finish that, I’ll write Trapper’s book, Something Wild. I’m not sure what’s going to happen with Karma’s book, all I know is I’d love to write it and I have some ideas marinating.

Robin, thanks so much for stopping by Peeking Between the Pages and taking the time to answer my questions. Thanks for another great novel in Wild Thing and I’ll be anxiously awaiting your next one!

RK:  Darlene – Thanks so much for the invite. I’ve enjoyed it!

About Wild Thing by Robin Kaye

When Hunter finds Toni’s book on how to marry the man of your choice, he studies it as a joke. Before long Hunter realizes he’s never cared enough for a woman to bother working this hard to get her. But the last man in the world this city girl wants is a Survivor Man wannabe… 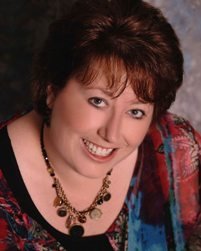 Robin Kaye was born in Brooklyn, New York, and grew up in the shadow of the Brooklyn Bridge next door to her Sicilian grandparents.

Living with an extended family that’s a cross between Gilligan’s Island and The Sopranos, minus the desert isle and illegal activities, explains both her comedic timing and the cast of quirky characters in her books.

She’s lived in half a dozen states from Idaho to Florida, but the romance of Brooklyn has never left her heart.

She currently resides in Maryland with her husband, three children, two dogs, and a three-legged cat with attitude.

I have one copy of Wild Thing by Robin Kaye to share with my readers.  To enter…

This giveaway is open to US and Canadian residents only (no PO boxes) and I will draw for the winner on Saturday, December 31/11.  Good luck!