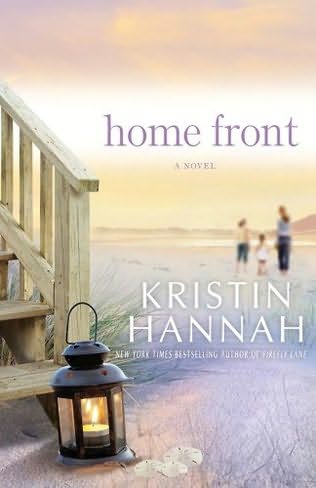 Home Front, Kristin Hannah’s newest novel, affected me on so many levels. It tells the story of how a family deals with life when one of the parents is deployed to Iraq. It paints a very real picture of how people’s lives are affected by war. Not only does the war greatly change the life of the service person, it also really has a huge impact on those left on the home front trying to deal with the absence of their family member.

Jolene is in the military as a Black Hawk helicopter pilot for the National Guard. She’s been training since she was eighteen years old which is when she met her best friend Tami and they’ve been flying together since. She met Michael, her now husband, first as a young woman when her parents had both died. He told her to come back when she was older and that’s just what she did. They were meant to be. Years later they have two daughters Betsy and Lucy. As life goes, the marriage seems to be on some pretty rough ground and when one night Michael tells Jolene he no longer loves her, she is stunned.

One thing to understand about Jolene is she had a bad childhood and was the product of two parents who showed her no love at all. Her life is all about the love she has for her husband and children but her positivity and always looking on the bright side is beginning to get to her husband. Jolene has no idea what to do – will they get a divorce. Well she doesn’t have long to wonder because within days she is deployed. Michael is livid as he has never supported her service in the army. He doesn’t agree with the war and therefore doesn’t agree with her putting so much time into it and now to leave her daughters who need her so much – well he doesn’t get it. He doesn’t stop to think about how hard it is for Jolene to leave her girls.

Jolene and Tami leave and life in Iraq is even worse than they had imagined. They are constantly in danger. Home is what keeps them going but for Jolene her thoughts always venture to the night her husband told her he didn’t love her anymore. Michael, back at home, is getting a quick lesson in how to be a parent and pretty much sucking at it at first. However as time goes on Michael begins to realize how important family is and the value of spending time with them. At the same time he begins to question his feelings for Jolene again, wondering if not part of the problem laid with him and his issues.

That’s all I’m going to say because to say more would ruin the story for others. I loved this book. I loved the story and the sentimentality that went along with it. I suggest a box of tissues when you sit down with this novel. What I really took away from this novel was a new-found respect for our military. I have always had nothing but respect and awe for all that they do for us but what I found with this book is I put myself in the shoes of those going; those having to walk away from their children into such an unknown future. When you think about the horrors they experience at war and then come home, often wounded in ways we can’t imagine, they really need our support and understanding. They’ve fought for us – now we need to step up and fight for them.

Home Front will stay with me for a long while. It’s one of those stories that I enjoyed and read quickly but more than that it really made me think and those types of stories I do not forget. An excellent read!

Source:  Review copy provided by the publicist.  No compensation was received for this review and all opinions are solely my own.