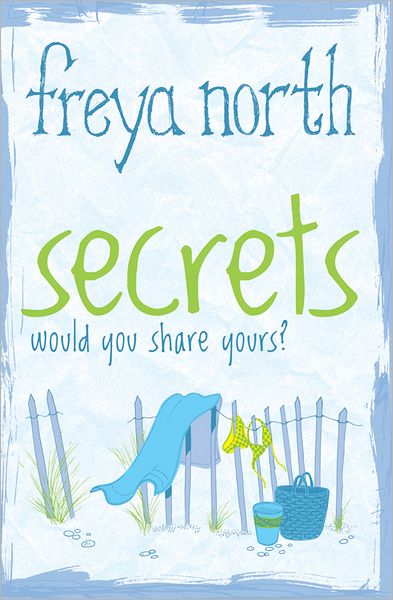 I love British Chick Lit and I don’t know why I’ve never run across Freya North before but I can tell you that Secrets won’t be the last of her books that I read. For me this novel was a great escape from my everyday life as it was a nice and fluffy kind of read and I needed that.

Tess is in trouble – big trouble. We find her hiding with her daughter at the beginning of the novel although we have no idea why. Tess is looking for a way out so when she finds an ad in the paper about a job as a house sitter she jumps at the chance. She phones up the owner and doesn’t really give him a chance to say much before he finds that she’s telling him that she’s driving up to his place right away. He’s thinking he’s got a real nut on his hands until he opens his door to Tess and baby Em.

Joe doesn’t know why but he ends up letting Tess stay. She’s nutty and a little odd and she just seems to take over. Even stranger is she has showed up with nothing. Most house sitters he’s had come with almost everything except the kitchen sink. Tess keeps asking if she can use his stuff. He has to admit though that she seems to make a house come alive. On his first trip away Tess starts her overhaul of his place and when he comes back he has to secretly admit to himself that he kind of likes it. She’s made this house of his into a home again.

I liked Tess. She was funny and I enjoyed the exchanges between her and Joe and especially all the new British words I learned. Joe on the other hand irritated me with his playboy ways but by the end of the book I warmed up to him. He was a man who had no intentions of becoming serious with anyone and especially someone like Tess but hey, who has any power over love most of the time? To be truthful, this is a slow book. Will you find anything earth shattering in its pages – no, but you will find a nice way to spend a Sunday afternoon curled up in your favorite chair. It’s like taking a look into the everyday life of two people and it worked for me. I loved that slow pace and the eventual revealing of the all important secrets that both Tess and Joe kept. I also loved the setting of Secrets- a seaside town that I would love to live in!

You can pick up your own copy of Secrets by Freya North here in the US and here in Canada.

Source:  Review copy provided by Sourcebooks via NetGalley.  No compensation was received for this review and all opinions are my own.