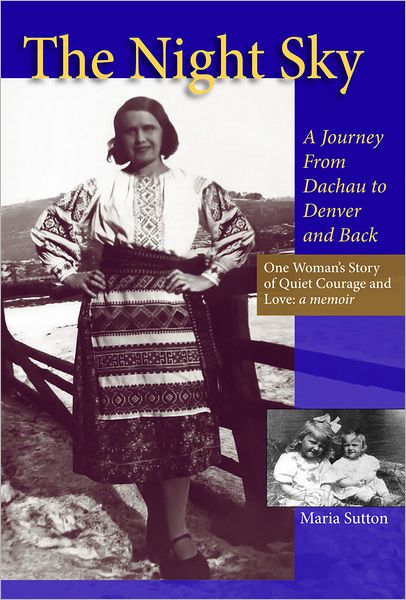 I want to start this review off by saying I was deeply moved by The Night Sky: A Journey from Dachau to Denver and Back by Maria Sutton. At thirteen years old Maria overhears a conversation between her mother and a friend that impacts her in so many ways. Maria learns that the man who has cared for her for all her years is not actually her father; a man named Jozef Kurek is. This knowledge sets Maria on a journey to find out who this man was and why he would abandon his family. It takes her forty-three years but eventually she uncovers things about her family that she never could have imagined and met an extended family who will forever have a place in her life. She finally has her history – a history that she can pass down to her children and generations to come.

It all begins with World War II and three people: Jozef Kurek, Maria’s biological father, Julia, her mother, and Wasyl, her uncle and mother’s brother. In trying to find her father, she re-traces the lives of her parents as they tried to survive the war. For many years her mother wouldn’t talk of that time in her life but as she got older she began speaking of it. Maria gleaned information from things her mother would say and hours upon hours of research. She learns that her mother was an amazing and strong woman who survived horrible conditions; a woman who refused to give up on life or her children even when it seemed all was lost and a woman who married a man she didn’t love (but grew to care about) in order to give her children a better life in America. Her father Jozef was a man who she held high in her mind but as she learns more about him she finds he isn’t the man she had hoped he’d be. Her Uncle Wasyl she had to find for her mother as they were separated when they were young and her mother had always missed him.

Maria was consumed although I guess some would call it obsessed with finding out everything she could. At one point she even hired a KGB agent to help her find her Uncle Wasyl. Her mother was already eighty-eight and Wasyl eighty-five when they finally got to see each other again after sixty-five years. She knew how important it was for them to meet before it was too late and when they did I sobbed it was so beautiful. I greatly admired her dedication and desire to find out as much as she could about her family’s past. To be able to go back in history like that and visit the places you knew your parents had been is an experience in itself. It made me remember going to the farms where my parents grew up. They were just little shacks really – a kitchen, two rooms. To let your mind go back and think of your parents sitting in those kitchens or playing in the woods was something I’ll never forget so I could relate to Maria’s experience in that way. For her to sit down and write a memoir such as this was a labor of love. Even though not everything turned out how Maria would have liked it, this was still a journey well taken.

I would not hesitate to recommend this memoir to those who love to read them or those who have an interest in WWII because there is a wealth of information regarding it in this book. For me, I loved how Maria weaved history in with the personal side of her parent’s lives. To me that’s what made this memoir different from others. I have always been interested in books regarding WWII and the people who lived through it so that was a huge reason I was interested in this book to begin with but it turned out to be so much more for me. As much as the way people were treated by the people working for Hitler horrifies me I feel the need to read the books. I think for me it’s to give respect to those who lost their lives and those who survived by sheer force of will. It’s important that none of us forget what happened so that it never happens again.  It’s also interesting to note that many people know that millions of Jewish people lost their lives but so did many Ukrainian/Polish people. It made me grateful that my Ukrainian grandparents had all immigrated to Canada long before this war.

Well I could certainly go on but this is a book you need to experience for yourself. This memoir really did touch my heart. It’s a heart wrenching story and yet hopeful as well. It’s a story of survival, courage, determination, and a lot of love. My one regret reading this is that I had an e-copy from the author and apparently the book has photos as well. I would have loved to see those as I think they would have added so much to the story itself. The Night Sky is a very powerful memoir and one that is well worth reading!

I have one copy of The Night Sky:  A Journey from Dachau to Denver and Back by Maria Sutton to share with my readers.  To enter…

This giveaway is open to Open to US, Canada, UK, Australia, Germany, Poland, Russia, and Ukraine (no PO boxes) and I will draw for the winner on Saturday, February 11/12. Good luck!

Source: Review copy provided by the author. No compensation was received for this review and all opinions are solely my own.