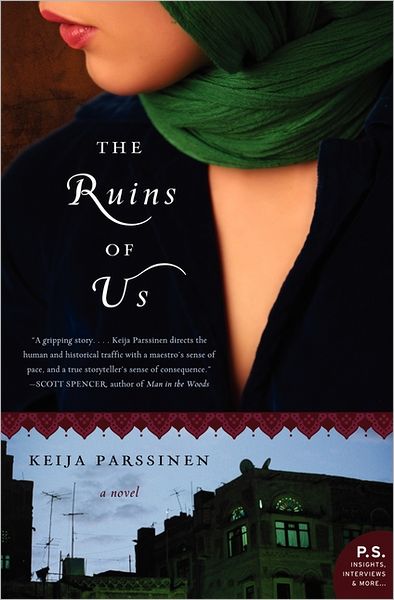 The Ruins of Us by Keija Parssinen is a novel of many things – family, love, and discontent. Rosalie is American born but spent her childhood in Saudi Arabia. Even at a young age she developed a love for the country and always knew she wanted to go back after going to college in America. Meeting Abdullah in America and then falling in love, marrying, and building a life in Saudi Arabia was exactly what she had always wanted and for more than twenty years she was happy and fulfilled. That is until she discovered that her husband had taken a second wife and even more than that, he had been hiding it for two years.

This discovery totally uproots her life in so many ways. Everything she knew and believed in when it came to her life and love with Abdullah now seemed so wrong and she couldn’t fathom ever feeling and knowing that love again. For the most part Abdullah believes in living more of a modern life. He doesn’t hold his wife or children strictly to the customs that had once plagued the country. They have the freedom to live their lives quite normally. None of the rest of his family – his brothers – believe in taking second wives. Abdullah is the first to do so and in this he refuses to change his mind. He is entitled, according to the law, to have another wife and that is how he goes about justifying what he’s done to Rosalie. Rosalie refuses to have much to do with him and tells him he has ruined their family forever.

On the sidelines are their children Mariam and Faisal. Mariam is pretty level headed although, even at fourteen, she believes strongly in equality for women. Faisal though is a young boy about to take a path that can lead him nowhere good. Faisal is growing ever resentful of his family’s lifestyle. He believes they don’t spend the amount of time in prayer that they should and that the women in the family are allowed more freedom than they should have. In short, they do not follow the customs in which he is becoming more and more obsessed with. This is what will ultimately lead Faisal to do the unthinkable to his family. Will they survive? Will love ever again blossom where it has died?

I enjoyed The Ruins of Us. I am always interested in novels that deal in any way with other cultures. The culture in a country like Saudi Arabia fascinates me simply because of the customs they live by. Granted many live much freer lives now than in the past but the old customs are still alive. I do know I wouldn’t want to be a woman living there. To not even be able to look at a man without someone thinking something was going on or always having to watch what I say would likely kill me. I liked the characters well enough although I can’t really say I connected to any of them on any great level and that’s probably because this lifestyle – even the freer one that Rosalie led – is still too constrictive to me. Ultimately this novel really shows us what happens when one takes the commitment to a certain way of life a little too far and breaks the bonds of family and love.

Source: Review copy provided by TLC Book Tours and the Publisher via NetGalley.  No compensation was received for this review and all opinions are solely my own.