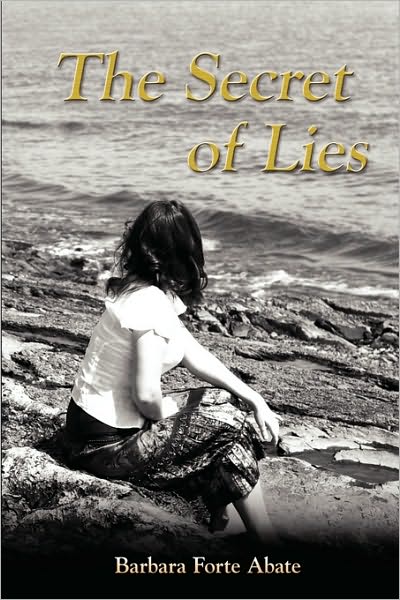 The Secret of Lies by Barbara Forte Abate starts at the end with Stevie leaving her husband and then propels us backward to Stevie’s younger self and her family. We enjoy summers with Stevie and her sister Eleanor who have always spent the summer at the beach with their aunt and uncle. The girls live on a farm with their strict parents so these summers are pretty important to them. Yet all things must change. Kids grow up, things change, and you can’t always take back the bad things that happen that will forever change everyone’s life.

Life at their aunt and uncles is great for Stevie and Eleanor. Their days are spent laying around the beach, swimming, or sitting on the porch sipping lemonade. Eleanor being a few years older is boy crazy so she’s always looking out for her next summer romance but Stevie’s not all that interested – yet. Then she meets Jake and has her own little crush on him. From that point on Stevie enjoys the summers even more and always looks forward to seeing Jake again.

Yet the last summer the girls spend at the summer house changes everything. Stevie is fifteen and Eleanor seventeen; both young ladies already. Stevie begins to notice changes in her sister and her aunt as well. Her aunt and uncle fight constantly making both girls uncomfortable. Her sister seems more secretive than usual and tends to go off on her own a lot more than normal. Even more strange is all the time their uncle is now spending at the summer house as with all the past summers he only came out on the weekends. Stevie lets it all pass though. She doesn’t want anything or anybody to ruin her summer with Jake. But something will ruin her summer with Jake. Something will end up ruining more than her summer, it will essentially take over her life as tragedies and secrets usually do.

I can’t say anymore for fear of spoiling the story for others but I will say that Stevie eventually ends up meeting a wonderful man named Ash who at first she adamantly hates. It’s actually quite funny to follow her little journey to finally discovering that she just might love this man. Unfortunately for Stevie she carries a lot of baggage and while Ash is a patient man, even he can only take so much. In order to have the life she wants Stevie has to confront her past and deal with it once and for all.

The Secret of Lies is full of great characters but Stevie was my favorite. I liked Stevie from when she was a young girl and even though there were times as an adult I wanted to bop her on the head I still liked her. This novel really takes us into the heart of a family who suffer from the lies we tell and the secrets we keep. Secrets and lies that never fail to destroy a family and hearts. The Secret of Lies is heart wrenching and yet hopeful and very much worth reading. I found myself at a loss as to what to read the other day and I just picked it up on the off chance that it would capture my attention and that it did – I finished it the next day! I love a novel that I don’t want to put down and that keeps me reading late into the night. The Secret of Lies was that book for me!

I’ll leave you with the book trailer to enjoy…

You can find Barbara on her website, blog, and Facebook.  Your own copy of The Secret of Lies by Barbara Forte Abate can be purchased here in the US or here in Canada.  It is also available for your Kindle or Nook.