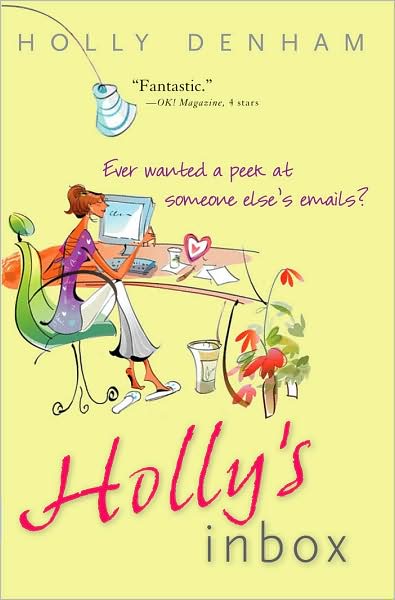 I remember back when I first read Holly’s Inbox and found myself stunned that a man had written it because I always expect good chick lit to come from a woman but take it from me Bill Surie is great at creating an awesome story that will keep you entertained for hours!  I first reviewed Holly’s Inbox back in 2009 (my review) and loved it!

My goal today is to get the word out there that Holly’s Inbox and it’s sequel Holly’s Inbox: Scandal in the City are now available as eBooks, which is likely a good thing because they are chunky books (although the giveaway is a paperback).  An eBook is perfect for your iPhone, iPod, iPad or your Kindle!

Holly’s Inbox is completely written in emails between Holly and her friends and it is downright hilarious the trouble that Holly can manage to get herself into.  Here’s a quote from my review in 2009:

‘Holly’s Inbox by Holly Denham (a.k.a. Bill Surie) has got to be the most fun I’ve had reading a book in a while. Have you ever closed the last page of a novel and wanted to open it back up right away and start over? That’s exactly how I felt about Holly’s Inbox! It is done in the manner of Bridget Jone’s Diary which I also loved – I think I just really like getting in on a person’s inner most goings on and being snoopy.’

As you can see it was a favorite of mine and still is!  There is also a sequel called Holly’s Inbox: Scandal in the City (my review) and it’s fantastic as well!  If you read the first one there is no way you’re not going to want to read the second one!  Best of all it’s available as an eBook as well!

Meet Holly Denham. It’s her first day as a receptionist at a City investment bank and, with no corporate front-of-house experience, Holly is struggling to keep up. Add to this her mad friends, dysfunctional family and gossipy colleagues, and Holly’s inbox is a daily source of drama, laughter, scandal and even romance. But Holly’s been keeping a secret from everyone – and the past is about to catch up with her…

Read an excerpt from Holly’s Inbox

Read an excerpt from Scandal in the City

Buy Scandal in the City here at Amazon.com, Amazon.ca, or Amazon.co.uk

I have one paperback edition of Holly’s Inbox by Holly Denham (Bill Surie) to share with my readers.  To enter…

This giveaway is open to US and Canadian residents only (no PO boxes) and I will draw for the winner on Saturday, February 18/11.  Good luck everyone!