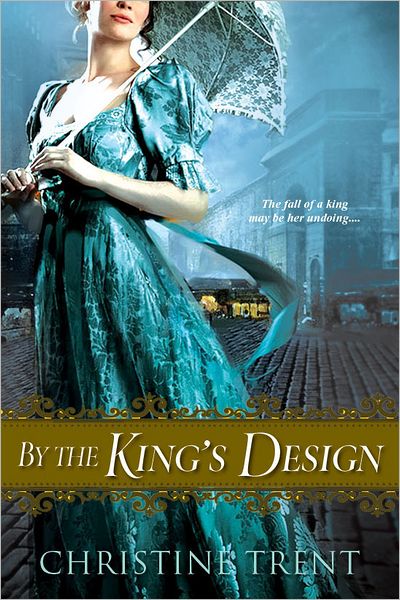 By the King’s Design by Christine Trent is why I love historical fiction! What a fabulous read! There is nothing I like better than when an author can weave fact with fiction and have me so glued to the pages that I can’t put the book down. By the King’s Design has it all – greed, vengeance, and love!

Annabelle Stirling is a very strong and determined woman for the era she was living in which was the 1800’s. After Belle’s parents died in a fever epidemic she took over running the family draper shop (cloth merchants) even though her brother Wesley is the true heir. Unfortunately Wesley doesn’t take much of an interest in the shop and would rather be out and about while Belle is truly good at what she does and loves it. In an effort to get more cloth produced in a day Belle installs a gig mill. However this doesn’t go over so well in the community as it will take away work from those who need it and Belle’s shop ends up being destroyed by none other than her own fiance and her brother. Belle is incensed and not only calls off her wedding but heads off to Parliament to make sure someone hears her case and puts a stop to this kind of thing happening to people just trying to earn a living.

Belle is turned away at every stop in London but she is not a woman to be stopped and finally ends up being heard by the Parliament. Of course they pretty much laugh her off but one thing they don’t forget is how spunky, passionate, and outspoken she is and this is what happens to reach the Prince Regent’s (the future King George IV) ears and he is intrigued. When he meets her, he is impressed and decides to have her provide the fabrics for his Royal Pavillion. Belle has already found a shop and her brother Wesley has brought all her supplies to London so she accepts of course – it is quite the honor. As word spreads, so does Belle’s business and soon enough her shop is thriving and she is more busy than ever. She even meets a man -a cabinetmaker – and while she’s attracted to him she’s also worried as she refuses to give up her independence for anyone. Just as things are going well her brother Wesley begins acting stranger than ever and all of a sudden things aren’t quite as stable as they once were. Will she fall in love? Will her flourishing business be ruined by her brother?

I can’t say enough about this novel. I enjoyed it so much. I loved all the details on being a draper and on cabinetmaking – you learn just what was and wasn’t popular back in this time period. It was all really fascinating. I also enjoyed the vivid details that the author provided when describing just what the Prince Regent was looking for in the design of the Pavillion. There is a lot of historical detail regarding the Prince Regent who eventually became King George IV and on the Regency period. For me this was a plus and I didn’t find it overwhelming at all as I didn’t previously have a lot of knowledge on this time period. When I read historical fiction I look for those details as I want to learn as much as I can while having a story to enjoy. Christine Trent achieved this and more with By the King’s Design and I wouldn’t hesitate to recommend it those who love historical fiction and I can’t wait to read more of her work!

I read By the King’s Design by Christine Trent for her book tour with Historical Fiction Virtual Book Tours. Be sure and check out the other tour stops to see what other’s thoughts are on the book. You can find Christine at her website and on Facebook. Your own copy of By the King’s Design can be purchased here in the US and here in Canada. Better yet you can head over and enter the giveaway I have running right now for By the King’s Design and win a copy!

Source: Review copy provided by Historical Fiction Virtual Book Tours and the Publisher. No compensation was received for this review and all opinions are my own.