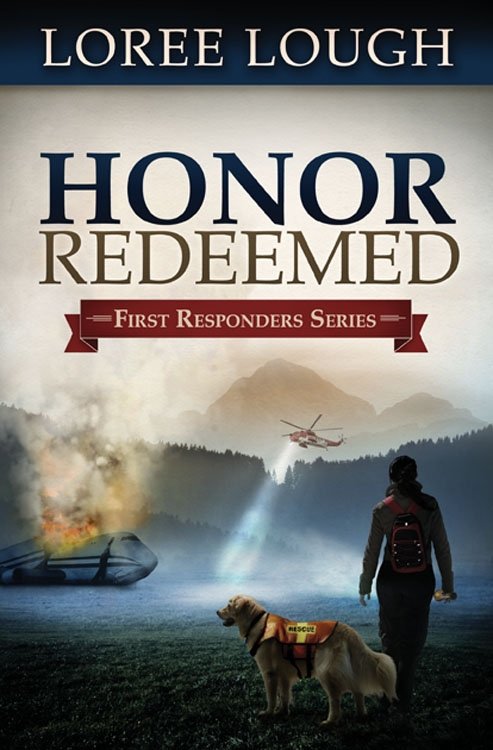 Honor Redeemed by Loree Lough is her second book in the First Responders Series. I read From Ashes to Honor last year (my review) and liked it so I was excited to read this one as well and I wasn’t disappointed. There were many characters from the first novel that were included in this one and it was nice to see them back and find out how they were faring. With that being said you don’t have to read the first one to enjoy this one but I think it adds a lot more enjoyment to the second novel by doing so. Honor Redeemed is a novel about sacrifice and love and it will definitely tug at your heart!

Honor Mackenzie has been dealt some rough blows both in childhood and in her adult years but she’s tough and she picks up and keeps going. She began working as a firefighter after losing her fiance in the days after 9/11 but soon nasty rumors began circulating about her and both her reputation and career were soon in the dumps. Because she wants to give back and honor those who lost their lives in the line of duty she decides to volunteer in search and rescue with her dogs Rowdy and Rerun and also trains both dogs and their owners in search and rescue.

Honor isn’t one for relationships so when she meets Matt she is really cautious for more than one reason – he is also a reporter and it was a reporter who had initially spread all the awful rumors about her. Matt is charming though and she is drawn to him and his sons. Yet there is always those niggling thoughts and for Honor she wonders what will happen when Matt’s little family is exposed to all the awful stories about her and for Matt his first priority is his sons and he starts to shy away from a relationship with Honor because he doesn’t want his boys hurt. Will love and faith conquer all or will Honor and Matt be torn apart?

I was pulled into this story right off and it’s because I really enjoy the author’s writing. It’s simple and just flows and I like that. I enjoy the characters she writes about and while I got frustrated with Honor more than once I still felt very drawn to her and her struggles with letting anyone close to her. I found myself very invested in the lives of those in this book and caring about where they would end up in the journey of life. I like that God and faith play a big role in everyone’s life as well. My only complaint would be that the ending was rushed and I wanted more from it. I’m looking forward to the next novel in the series as I’ve come to really enjoy Loree Lough’s work!

I read Honor Redeemed by Loree Lough for her book tour with Pump Up Your Book. Be sure to check out all the other tour stops as well and you can find Loree at her website, blog, Facebook or Twitter. Your own copy of Honor Redeemed can be purchased here in the US and here in Canada.  I’ll leave you now with the Book Trailer…

Source:  Review copy provided by Pump Up Your Book and the Publisher via NetGalley.  No compensation was received for this review and all opinions are my own.