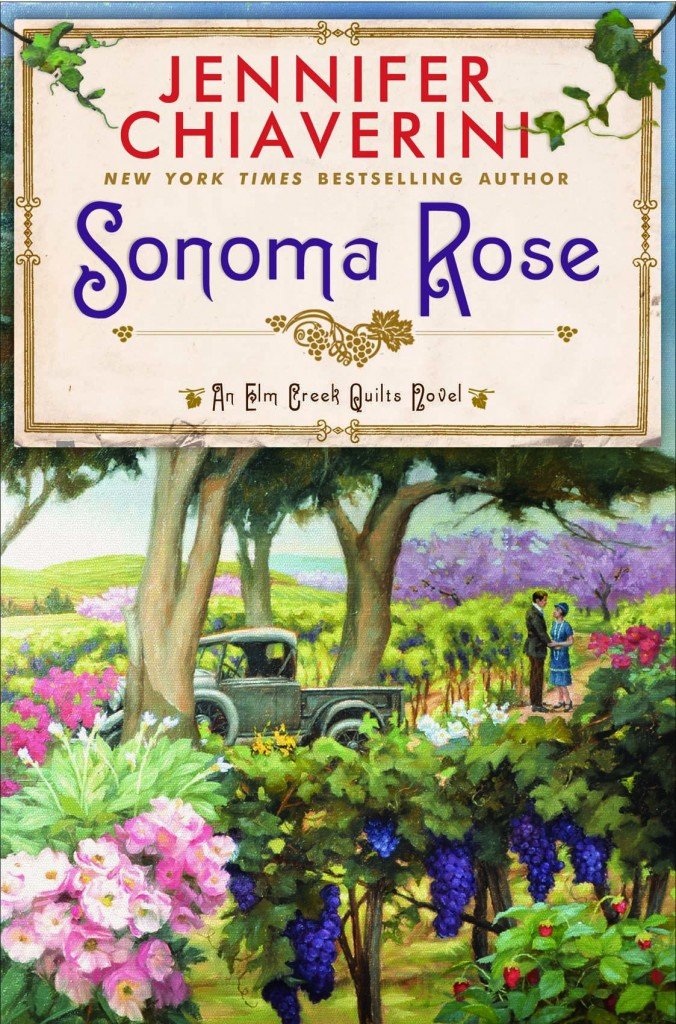 Sonoma Rose by Jennifer Chiaverini is a story that takes place in the Prohibition-era which was back in the 1920-1930’s when times were tough. Rosa starts out as a young girl in love but people change and life changes and her life takes a path decidedly different from what she had wanted as that young girl who believed in love and happily ever after. Sonoma Rose is a story of survival, hope, but most of all love.

Rosa and Lars are in love but as time goes on Rosa sees that Lars has a serious problem with alchohol and after being disappointed and let down by him several times she begins to date John who her parents approve of. When she finds out she is pregnant and Lars is nothing but a drunk she agrees to marry John without ever telling him the truth. Secrets have a way of coming out and eventually John realizes when the baby is born early but clearly full term that it isn’t his child. However he still remains with Rosa and takes care of her child because that is what the church says he has to do.

Over the years Rosa has eight children but only four are living. Her children keep passing away from a wasting disease except for two of them and both of those children happen to belong to Lars. When John who has been extremely volatile for a good many years of their marriage learns of yet another betrayal on Rosa’s part he goes crazy and beats her even more serverely than usual. If not for her friend Elizabeth being there he likely would have killed her. Rosa takes off with her children to the mesa where she knows John won’t venture and she stays in a cave with them until Lars shows up to rescue them and take them away from John forever. She knows to keep her children safe she can never go back to him.

Rosa’s first stop is to try and find help for her two sick children and she finds a leading specialist willing to help her. With his help both Lars and Rosa find work and a home on a vineyard. Lars being a farmer blends right in as does Rosa. With the ban on producing any alcohol though life is tough on people making their living off making wine unless of course they are bootleggers and when those bootleggers are being watched then things get really bad. As time goes on Lars and Rosa, with the children, build a new life but is the past ever far behind? Can Rosa ever really escape John?

This is the first of Jennifer’s books that I have read but it won’t be the last. I really liked Sonoma Rose and although some parts dragged a bit for me, for the most part I just really enjoyed the story being told and all the historical detail really enriched this novel for me as well. I felt emotionally invested in the lives of Lars, Rosa, and the kids and I was anxious and hopeful that their lives would turn out for the best and that they would all thrive together. I would recommend this book for those who like stories that take place in the 1930’s and especially people who love stories about vineyards as there is a lot of talk about them. Sonoma Rose is one of those comfy stories that will leave you feeling satisfied and happy.

I read Sonoma Rose by Jennifer Chiaverini for her book tour with TLC Book Tours. As mine is the first stop on the tour be sure to pop in to all the other tour stops coming up to see what they all thought of the book as well. You can find Jennifer on her website, Facebook, and Twitter. You can pre-order your own copy of Sonoma Rose here in the US and here in Canada.

I have one copy of Sonoma Rose by Jennifer Chiaverini to share with my readers.  To enter…

This giveaway is open to US and Canadian residents only (no PO boxes) and I will draw for the winner on Saturday, March 3/12.  Good luck to all!

Source:  Review copy provided by TLC Book Tours and Dutton Adult via NetGalley.  No compensation was received for this review and all opinions are solely my own.