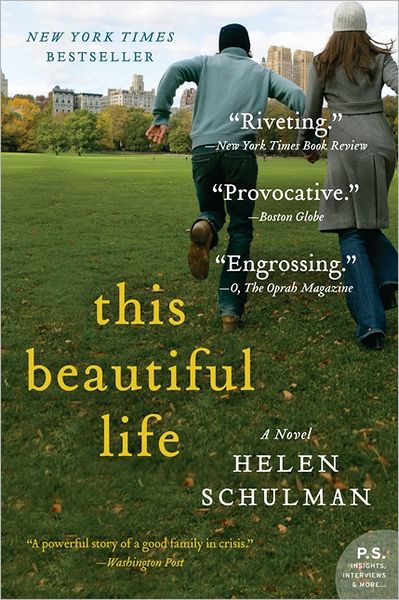 This Beautiful Life by Helen Schulman is a very relevant story as it highlights the dangers and aftermath of what happens when young people send explicit material either over the internet or through texting. It is often devastating to everyone involved and the toll it takes on an individual has lasting effects throughout their lives.

The Bergamot family is normal by any standard. They had once lived in a small town and loved it but Richard was offered a prestigious position with a University in New York and they felt that it was something that would benefit their family as a whole if he accepted. Life is much different in New York for Liz and for the most part she really feels out of her element. The kids now attend private schools, Richard is always working, and Liz, instead of having a career, is basically just caring for her family.

Things start out simply enough one evening when Liz and Coco are both attending a sleepover at a hotel with some other moms and their daughters and her son Jake is off to a party with his friends. It’s only recently when he turned fifteen and a half that he was even allowed to go out and take the subway with his friends. Jake and his buddies have a bit much to drink and end up at a party with some kids from school. Jake has had a crush on one of the girls but she is with a boy and off limits. There is Daisy though who is hanging all over him and while alcohol is taking over a bit he still realizes she is much too young for him at only thirteen. Later, at home, he receives an extremely sexually explicit video from Daisy and without stopping to think for even one second he forwards it to his best friend. From there the video went viral and nothing was ever the same for Jake and his family again.

What this novel really concentrates on is how this affects the family in the aftermath of the video going viral and everyone learning of it. Jake is of course suspended and it’s right around final exams and now they are all worried if he’ll get into a good college. Some people are on their side and others aren’t. Liz and Richard’s marriage gets even rockier as Liz blames moving to this elite area on all of their problems. Coco, their six year old adopted daughter gets a little lost in the shuffle until Liz finds her imitating the video that she just happened to see on her mother’s computer. Liz realizes she has to get herself and her kids back to a more stable life even if Richard doesn’t agree. She says at one point that she just can’t manage this beautiful life anymore. It’s too much for her while Richard only believes they should keep striving for more money and power.

I enjoyed This Beautiful Life. I didn’t connect with any of the characters – well maybe Liz a bit in that I really felt sorry for her. She didn’t feel she belonged in her community and then she was just so lost after the whole video incident. I think what the novel was missing most for me was an emotional connection and yet I was interested in the story being told.  The novel itself is sexually explicit in parts and very raw but also exceptionally well written. I wouldn’t recommend it to those who shy away from novels with bad language or sex but for those who enjoy thought provoking reads I’d say This Beautiful Life is one of them.  I also have to say that this cover really fits the novel – life is just like these cards; you can build it up to perfect but it can fall just as easily.  I have to amend this because I had  the hardcover picture up – so it’s the hardcover that’s like the house of cards just in case anyone is wondering why it’s different now.

Source:  Review copy provided by TLC Book Tours and the publisher.  No compensation was received for this review and all opinions are entirely my own.