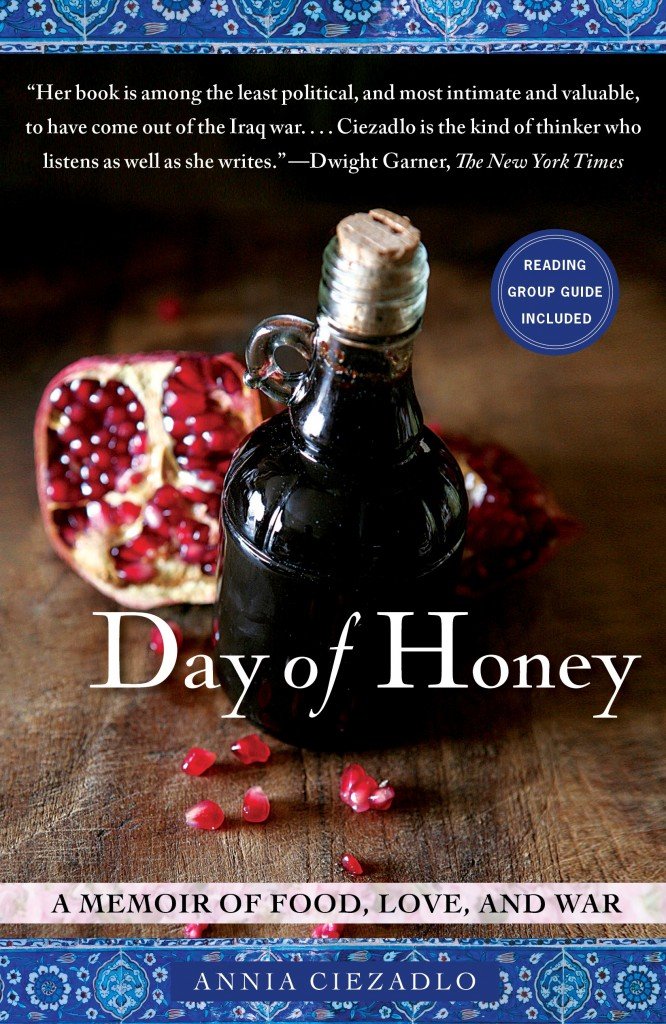 To celebrate it’s paperback release today I am spotlighting Day of Honey:  A Memoir of Food, Love, and War by Annia Ciezadlo.  I literally can’t wait to fit this book into my schedule as it’s been on my need to read list for a good long while already.  It combines all the things that I love to read about into one book and it sounds like a very powerful novel not to mention that it has gotten some great reviews as well.  Let’s see what it’s about and don’t forget to check out the giveaway at the end of the post too!

About Day of Honey by Annia Ciezadlo

A luminous portrait of life in the war-torn Middle East, Day of Honey weaves history, cuisine, and firsthand reporting into a fearless, intimate exploration of everyday survival.

In the fall of 2003, Annia Ciezadlo spent her honeymoon in Baghdad. Over the next six years, she broke bread with Shiites and Sunnis, warlords and refugees, matriarchs and mullahs. Day of Honey is her memoir of the hunger for food and friendship—a communion that feeds the soul as much as the body in times of war.

Living in occupied Baghdad, Ciezadlo longs for normal married life. She finds it in Beirut, her husband’s hometown, a city slowly recovering from years of civil war. But just as the young couple settles in to a new home, the bloodshed they escaped in Iraq spreads to Lebanon and reawakens the terrible specter of sectarian violence. In lucid, fiercely intelligent prose, Ciezadlo uses food and the rituals of eating to illuminate a vibrant Middle East that most Americans never see.

We get to know people like Roaa, a determined young Kurdish woman who dreams of exploring the world, only to see her life under occupation become confined to the kitchen; Abu Rifaat, a Baghdad book lover who spends his days eavesdropping in the ancient city’s legendary cafés; Salama al-Khafaji, a soft-spoken dentist who eludes assassins to become Iraq’s most popular female politician; and Umm Hassane, Ciezadlo’s sardonic Lebanese mother-in-law, who teaches her to cook rare family recipes (included in a mouthwatering appendix of Middle Eastern comfort food). As bombs destroy her new family’s ancestral home, and militias invade her Beirut neighborhood, Ciezadlo illuminates the human cost of war with an extraordinary ability to anchor the rhythms of daily life in a larger political and historical context.

From forbidden Baghdad book clubs to the oldest recipes in the world, Ciezadlo takes us inside the Middle East at a historic moment when hope and fear collide. Day of Honey is a brave and compassionate portrait of civilian life during wartime—a moving testament to the power of love and generosity to transcend the misery of war.

Annia Ciezadlo was a special correspondent for The Christian Science Monitor in Baghdad and The New Republic in Beirut. She has written about culture, politics, and the Middle East for The Nation, Saveur, The Washington Post, The New York Times, The New York Observer, and Lebanon’s Daily Star. Her article about cooking with Iraqi refugees in Beirut was included in Best Food Writing 2009. Ciezadlo lives with her husband in New York.

I have one copy of Day of Honey by Annia Ciezadlo up for giveaway.  To enter…

This giveaway is open to US and Canadian residents only (no PO boxes) and I will draw for a winner on Saturday, March 3/12.  Good luck!