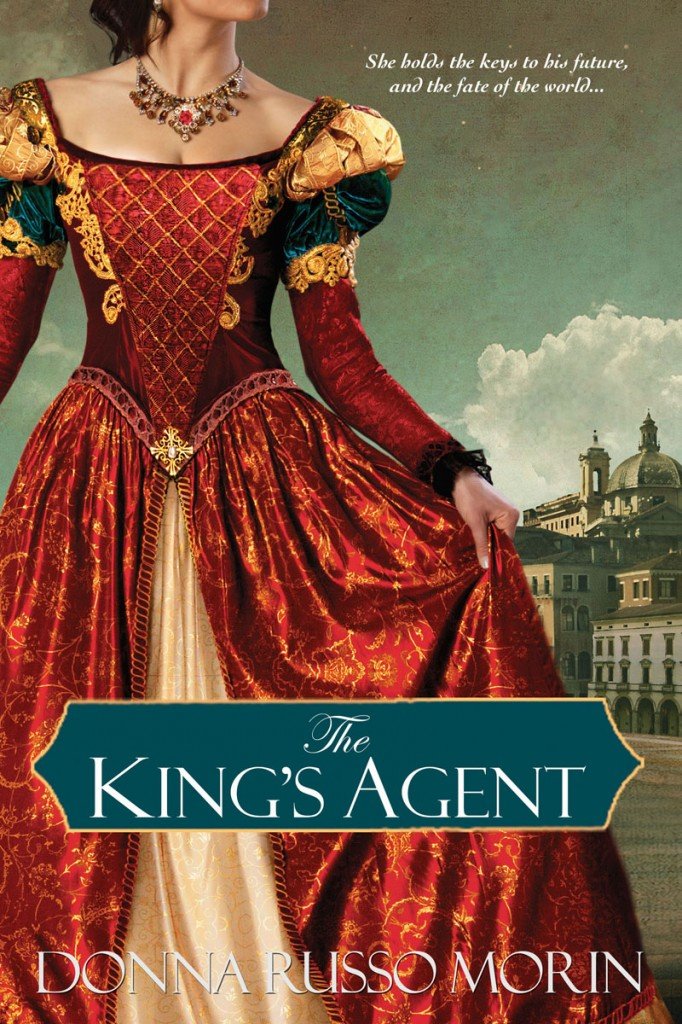 I’m pleased to welcome Donna Russo Morin, author of The King’s Agent, to Peeking Between the Pages today.  I am on tour with Historical Fiction Virtual Book Tours for Donna’s book so please be sure to pop back on Monday, March 5 for my review!  I haven’t started it yet but I’m hearing an awful lot of good buzz about it so I’m sure it’s going to be a great historical fiction read for me.  Today Donna joins us with a guest post entitled The Controversy of The King’s Agent…

Battista della Palla, the lead character in The King’s Agent, was a real man, born in Florence in 1489. During his full and prodigious life, he spent many years at the French court, forming an unbreakable bond with King Francois I and his sister Marguerite, one predicated, in part, on their mutual love of art. What became of that friendship is a role Battista would accept as his own for the rest of his life, that of Francois’ art agent, instructed to procure work by the Italian masters that Francois craved at any cost. In exchange, Francois promised Battista his sword—his military might—should Battista’s homeland of Florence ever require it. Battista fulfilled Francois’ requests, most every one of them, most often by nimble pilfering when legal acquisition failed him. In consequence, Francois I and his art agent Battista della Palla could easily be touted as the men directly responsible for what we now call one of the greatest museums in the world, the Louvre. Therefore, with a valid logical syllogism, it can be said that this astounding collection, visited by hundreds of thousands of people every year, began with stolen art.

All of the above is true, but it is not the greatest controversy proposed in The King’s Agent. Not by a long shot.

In The King’s Agent, Battista is commissioned with yet another acquisition by the King of France, but this one is like no other. Even the directive itself—the message of instruction—is couched in vague language and dictates that Battista find him an ancient relic, one crafted in the age of the Greek gods, before the time of Jesus, a relic which, “is said to possess the power I need to reign victorious.” This is but the beginning of the most bizarre quest Battista and his banda (band of men) have ever endured.

The trouble begins with the path to the relic, one whose stepping stones are laid with clues in the great art of the age. The quest itself is many layered, one painting must be found, which will lead to a triptych—a grouping of three paintings that create a single image—that will then lead to the relic. The discussion and search for these paintings, leads the art connoisseurs (for thieves they may be, but art experts they were first) to an exposure of paintings unlike any others they have seen; paintings which include symbolism of unearthly life. As outlandish as the notion may seem, it is not one of my imagination’s device, but one revealed to me during my research.

For the information in the remainder of this blog, I ask not belief, only the belief in possibility. I will not make a thesis on the support of ancient astronauts, but have chosen merely to accentuate works that may be used in evidence of such.

In an effort to stray from any spoilers, I will discuss the paintings highlighted in The King’s Agent out of context. To see how they affect the story, will take a reading of the work itself.

The painting that has, more than any other, sparked discussion among ufologists—and one of the first to make an appearance in The King’s Agent’s is Madonna col Bambino e San Giovannino (The Madonna with Child and Saint John). The painting hangs in the government palace in Florence—the Palazzo Vecchio—and is most often attributed to Sebastiano Mainardi. It is the image in the top left corner that is the most intriguing…the hardest to explain, an image that one might call an ‘air ship’. 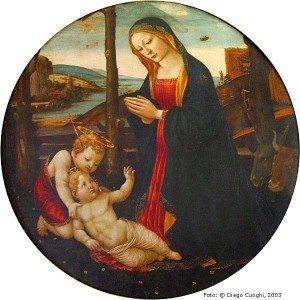 Impressions to note when studying this painting include the man and the dog on the far hill, both with eyes attentively pointed upward toward the apparition. In an article written in 1996 by Daniele Bedini (an expert in Design Space and Space Technology, an instructor at The Royal College of Art (London), ISU (Strasbourg), and the IED (Istituto Europeo di Design in Rome) and published in Notiziario UFO, Bedini wrote, “we clearly see the presence of an airborne object leaden in color and inclined to port, sporting a “dome” or “turret”, apparently identifiable as an oval-shaped moving flying device.”

In other journals, it is also theorized that the placement of Mary in relation to the two babies and the unidentifiable object is as a protector, to keep each from seeing and the other.

The next work is my personal favorite, not for its connection to the subject matter but for its composition and color. The Annunciation was painted by Carlo Crivelli in 1486. Unlike the hundreds, actually thousands, of other paintings dealing with the same theme, one of the most popular in all of religious art, Crivelli’s annunciation—by definition, the announcement by the angel Gabriel to the Virgin Mary of her conception of Christ—is committed not by an angel, but by a disc shaped object in the sky casting a beam of light down upon Mary on Earth. There is a great deal more activity taking place in this painting, people pointing at the main activity, and more cryptic symbolism whose meaning seems to have been lost. Crivelli’s Annunciation hangs in the National Gallery in London. 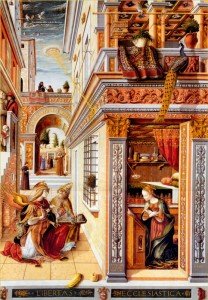 In The Bible and Flying Saucers (Avon Books, 1978) author Barry H. Downing wrote, “Where did this UFO come from, according to the Biblical account? The heavens were ‘opened’ and the Spirit seems to have descended from this ‘opening.’ This idea of an ‘opening’ represents an example of the ‘mythological’ expression…The ‘opening’ represents an example of the Bible cosmology…The ‘opening’ suggests that in our ‘three-decker universe’ a ‘door’ leads from our world below to the world above where the angels live in heaven.”

Rows of round, hovering objects fill the sky in The Miracle of the Snow: Foundation of Santa Maria Maggiore by Masolino da Panicale, which hangs in the Museo di Capodimonte in Naples, Italy. The work was originally part of the altar painting for the Church of Saint Mary in Rome. It reminds me of nothing so much as an early Renaissance rendition of Orwell’s War of the Worlds. The painting depicts Jesus and Mary hovering above the Earth on a very solid type of cloud, lenticular clouds in fact, those that are flat and circular, and accompanied by an armada of the same type of saucer-like objects stretching back beyond the horizon. 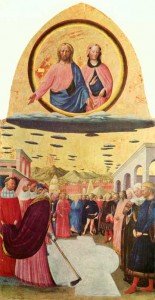 The original legend of this painting reads that in Rome sometime in the 4th century, during the reign of Pope Liberius (352-366), both the Pope and the Patrician Giovanni Patrizio were visited by an apparition of the Virgin Mary during which she entreated them to build a church in her honor and that they would know the location of where the church should be when they awoke the next morning.

The next morning—a hot summer morning—on Esquino Hill, the outline of the church lay on the ground in snow. Despite the heat, the snow lines remained until the church was staked, when it quickly melted.

To reiterate, I did not want to reveal what part these very real works of art play in The King’s Agent in order to maintain the integrity of the unique story.

The amount of information on extraterrestrials, more prodigiously known as ancient astronauts, is overwhelming (and not just from those society might label as ‘quacks’, but from some of the greatest, most educated, intelligent, and reputed minds of our time). And though it plays a minor part of a complex story, the particular notion that evidence of alien existence can be found in profusion throughout the art of man throughout time, is but one of the inspirations in my writing of The King’s Agent, but without question, the most controversial of them all.

About The King’s Agent

To the casual observer, Battista della Paglia is an avid art collector, or perhaps a nimble thief. In reality, the cunning Italian is an agent for François, the King of France, for whom he procures the greatest masterpieces of the day by any means necessary. Embroiled in a power struggle with Charles V, the King of Spain, François resolves to rule Europe’s burgeoning cultural world. When he sets his sights on a mysterious sculpture, Battista’s search for the elusive objet d’art leads him to a captivating woman on a mission of her own. . .

Having spent her life under the controlling eye of her protector, the Marquess of Mantua, Aurelia longs for freedom. And she finds it in Battista. Together, they embark on a journey to find the clues that will lead him to the sculpture– a venture so perilous it might have spilled from the pen of Dante himself. From the smoldering depths of Rome to a castle in the sky, the harrowing quest draws them inextricably together. But Aurelia guards a dark secret that could tear them apart–and change the course of history. . .

Donna’s other tour stops with Historical Fiction Virtual Book Tours
Click here for a downloadable pdf of the first chapter
Buy your own copy at Amazon.com or Amazon.ca 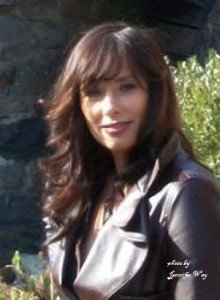 Donna Russo Morin was born in Providence, Rhode Island in 1958. Her writing endeavors began at age six and covered such timely topics as The Pink Pussy Cat for President and The Numbers 2 and 4 are in Love.
Traveling through adolescence on the wings of the ‘60s gave Donna a lot of grist for her writing mill. Feminism, civil rights, the Vietnam War were all a disturbing yet highly motivating muse. Donna found her voice in fiction and with the appearance of a new horror writer on the book scene, a little known author named Stephen King, she turned her pen to the gruesome and the grotesque.

After graduating from the University of Rhode Island, Donna worked in marketing and advertising for large corporations and small non-profit arts organizations. When she had her children, she knew with a certainty that she needed to show them, by example, that if you believe in yourself, anything is possible.

In addition to writing and teaching writing, Donna has worked as a model and actor since the age of seventeen, when she did her first television commercial for Sears. Since then she has appeared in more than thirty television spots and print ads, everything from changing the oil in her car (that was acting) to modeling fur coats. She also appeared in three episodes of Showtime’s THE BROTHERHOOD, as well as in Martin Scorsese’s THE DEPARTED.

Donna lives peacefully, close to the beautiful shoreline of Rhode Island that she loves so much, with her two sons, Devon and Dylan, her greatest works in progress. 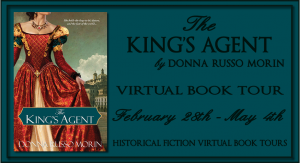 I have one copy of The King’s Agent by Donna Russo Morin up for giveaway to my readers and it’s open internationally!  To enter…

This giveaway is open INTERNATIONALLY!  I will draw for the winner on Saturday, March 17/12.  Good luck everyone!