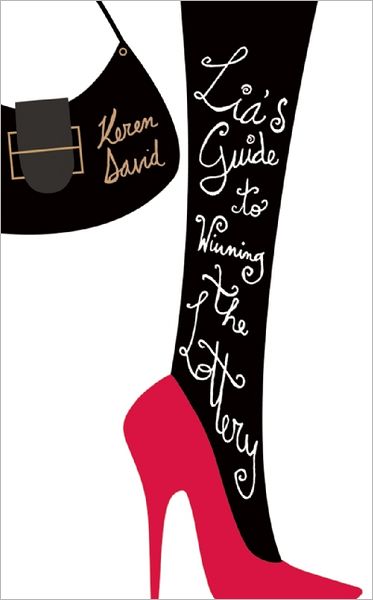 Lia’s Guide to Winning the Lottery by Keren David is a novel full of sassiness and yet with a serious tone to it as well. I found it to be a realistic story both in the content of what happens to someone when they win big and even more overwhelming when it happens to a young person and also in family relationships. I have to make a quick comment on the book cover as well – I love it! I think it’s young and fresh and will definitely appeal to the younger crowd.

Lia is only sixteen years old (yes in the UK you need only be 16 to win the lottery) when she wins 8 million pounds. She is giddy with happiness. To get rid of her nagging mum, sister, and her dad’s plans for her to take over the family bakery sounds like heaven to her. Lia knows that all this money is going to take care of all her problems and give her the life she wants where she can do whatever she wants with no one to tell her what to do. Yet, does being rich really solve all your problems? Does it mean happily ever after? Lia finds out that it doesn’t.

All of a sudden there is a Facebook page saying nasty things about Lia. Her friend Shazia is unable to share in Lia’s joy because gambling is immoral in her religion and that is how Lia got her money. Then there is Lia’s other best friend Jack and there’s a pile of trouble there. Jack was the one who bought her the winning ticket as a birthday present and now his mum is threatening to sue for half. What has happened to Lia’s world in such a short amount of time?

Then there is Raf…all the girls are ga-ga over him. He’s gorgeous and mysterious – rumor has it that he must be a vampire or something exciting like that. Lucky for Lia he is also her science partner. The only problem is he doesn’t seem to know she’s even alive. Then she wins the money, manages to faint where he just happens to be working, and all of a sudden he is paying attention to her. Shazia tells Lia he only wants her for her money and Jack says he’s gay. What’s a girl to believe especially when she so desperately wants to believe he likes her.

I have to admit I wanted to bop Lia a few times for being self absorbed and concerned with material things but then thought back to my teen years and realized I wasn’t much different. I did like how sassy she was although a few times I thought she was disrespectful. Now this could have to do with the language difference – for all I know kids may say the things Lia was saying to their parents in the UK and have it ok. I’m not sure. Sometimes words that are ok in one language aren’t in another. What I liked most about Lia though was that over the course of the book she realized that money isn’t everything – that family, friends, and love are what make all the difference in the world. But … as Lia says … the money sure does help!

I have one copy of Lia’s Guide to Winning the Lottery by Keren David up for grabs. To enter…

This giveaway is open to US and Canadian residents only (no PO boxes) and I will draw for the winner on Saturday, April 21/12.  Good luck to all!