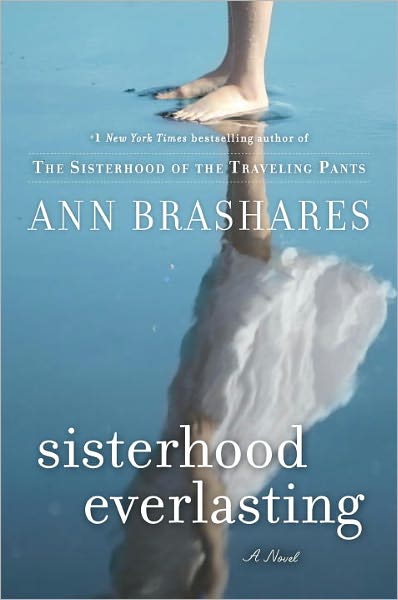 I am a huge fan of The Sisterhood of the Travelling Pants series and Sisterhood Everlasting finds us seeing what the girls are up to ten years later in life. These girls I’ve known from teens are just about to turn thirty! Tibby, Lena, Bridget, and Carmen are all grown up and leading very separate lives although still very much connected to each other through the deep bond of friendship they have shared since being thrown together by their mothers since they were babies.

Each of the girls has set out on the path of their lives. Carmen is a semi-successful actress engaged to a man but is it really that heart stopping kind of love or just an arrangement type? Bridget is still with Eric but still as scattered as she’s always been. She loves Eric but does she want to settle down? Every time he makes some type of move to make things more permanent she gets scared. However, the choice may be taken out of her hands sooner or later. Lena, the one girl I thought would be really successful and confident really isn’t. She spends her time on her art and thinking about what could have been so long ago had she pursued a relationship with the gorgeous Greek, Kostos

Tibby has been living in Austrailia with Brian, her long time boyfriend because of his job. She hasn’t really kept in touch very much with the other girls and they are becoming worried as they’ve tried contacting her so many times. They all miss each other so much. Then out of the blue each of the girls receives a plane ticket from Tibby to meet in Greece where they had vacationed as girls. It’s going to be a wonderful reunion and the girls can’t wait! They all arrive and are prepared for lots of reminiscing but things take a much different turn on them. A turn none of them could ever expect and certainly one that none of them were prepared for. To say more at this point would ruin the book for fans of this series so I’ll stop there. I’ll only say that the events that unfold after this point kept me turning the pages until I could find out exactly what had happened.

I’ve always loved these girls; some more than others. As I said earlier I was disappointed in Lena’s lack of success and her indecision when it comes to Kostos. Bridget surprised me as well as I thought she would have grown up along the way but she was still really the same airy self she was as a teen. Carmen has never been a favorite of mine but other than picking the wrong man to have in her life she was actually doing pretty well. Tibby moving so far away from the other girls was a surprise too but then that’s real life. You can’t always live by your best friends forever.

Sisterhood Everlasting is a great wrap up to the series although there was something that happened in it that left me sad. I did like the ending as it brought everyone together and things were definitely looking up for the girls. All of them seem to find themselves again and have the courage to make the changes they need to in order to move forward in their lives and in love. I loved Sisterhood Everlasting and for those that have kept up with the series I’d say it’s a must read. As Sisterhood Everlasting takes place with the girls as adults this novel will appeal to the older crowd maybe more than the young adult ones would so if you don’t want to start at the beginning you could still read and enjoy this one although in my opinion, maybe not as much. Either way it’s another fantastic novel for Ann Brashares! I’m really going to miss these girls now that their story is over!

Source:  Copy received for review from the publisher.  No compensation was received for this review and all opinions are solely my own.  This review was originally posted by me on Book Trib as part of the Review Crew.