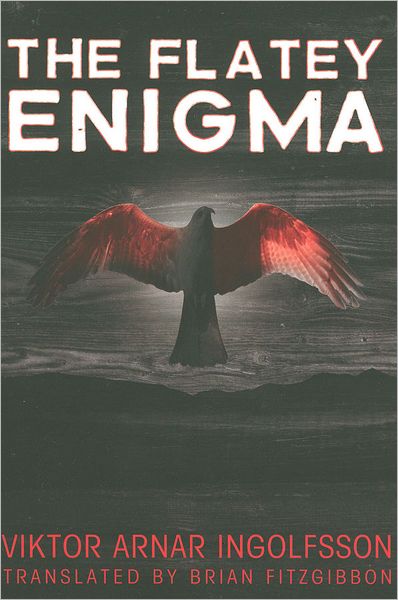 Good morning everyone.  Are you all having a good weekend so far?  Not too much going on here this weekend.  I’m just going to enjoy the nice weather and hopefully get some reading done.  I’m spotlighting a crime novel that has been nominated for the Glass Key Award for Nordic Crime Fiction for you today called The Flatey Enigma by Viktor Arnar Ingolfsson.  Now this isn’t my normal genre although this one does sound good but that aside I still wanted to share it with my readers who love the crime novels.  I’m going to share what the book is about with you, a bit about the author, and don’t forget to check out the giveaway at the end for your chance to win one of three copies!

When students sailing from Iceland to study in Copenhagen in 1871 devised a quiz around the text of a famous medieval manuscript to entertain themselves on the journey, they never suspected their unsolved riddle would become the center of a gruesome murder mystery…

So explains Viktor Arnar Ingolfsson in his novel, THE FLATEY ENIGMA. Steeped in the mystery and lore surrounding the Icelandic Book of Flatey, a medieval tome that recorded the histories of the Norse kings, Ingolfsson‘s international bestseller, set in 1960s Iceland, ends each chapter with a clue and answer from the 40 questions making up the puzzle, the so-called “Aenigma Flateyensis.” It is however, the fortieth question and key to the riddle that has never been solved.

An enticing blend of fact and fiction, Ingolfsson’s FLATEY ENIGMA begins with the death of Professor Gaston Lund, a Danish cryptographer who visits the tiny island of Flatey (for which the book is named) to attempt to solve the Aenigma Flateyensis once and for all. When his body is discovered on a deserted island nearby, no one can determine how or why he ended up there.

When another body is uncovered with a Viking symbol carved into its back, Kjartan, a young lawyer from the district magistrate’s office is assigned to investigate. All connections lead back to the riddle of the Book of Flatey. Had Lund solved the puzzle only to perish?

As Kjartan unravels the clues, myths, and code surrounding the Flatey Enigma, fans of Nordic crime writers such as Henning Mankell, Karin Fossum, and Arnaldur Indridasson will relish the cleverly plotted layers of this Glass Key-nominated mystery.

Viktor Arnar Ingolfsson is one of Iceland’s most accomplished crime fiction authors. His novel House of Evidence was nominated for the Glass Key—the Nordic Crime Novel Award—in 2001 and The Flatey Enigma—a bestseller for weeks in Germany—was nominated for the same prize in 2004. In addition to having a successful career as a writer, he continues to work full-time in civil engineering at the Public Roads Administration in Iceland.

As a translator and playwright, Brian FitzGibbon has a particular passion for the translation of fiction. With experience that spans over twenty years, he has translated a vast array of film scripts, treatments, stage plays, and novels, working exclusively into English from Italian, French, and Icelandic. His Icelandic to English translations have been hailed by the Guardian as “dazzling,” the New York Times as “lucid,” and Booklist as “luminous.”

I have 3 copies of The Flatey Enigma by Viktor Arnar Ingolfsson up for grabs.  To enter…

This giveaway is open to US and Canadian residents only (no PO boxes) and I will draw for the winners on Saturday, April 21/12.  Good luck!