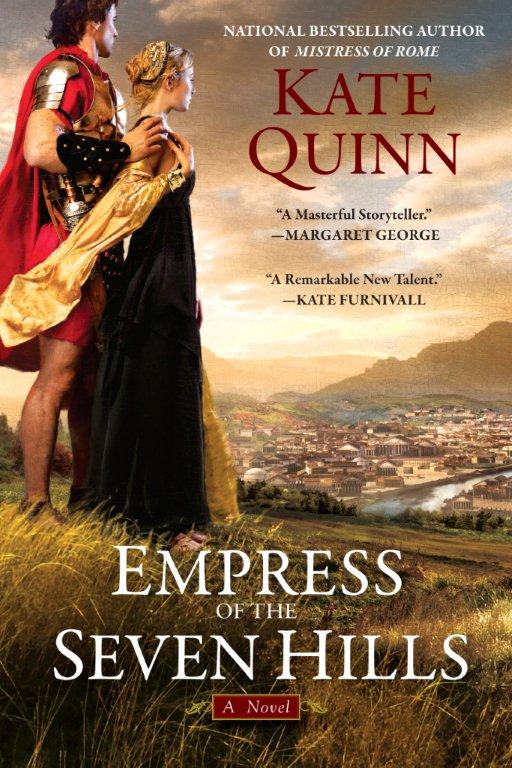 Empress of the Seven Hills by Kate Quinn is another journey to Ancient Rome that will keep you spellbound within its pages as you experience betrayals, adventure, battles, greed, power, and love. I first discovered Kate Quinn when I read her first book Mistress of Rome (my review) and I loved it. I haven’t read Daughters of Rome yet but it’s next on my list. You do not have to read these books in order. They stand alone quite well but it was nice to be able to recognize some of the characters and events being spoken about having read the first book.

Vix has decided that there is nothing for him in his home country so he ventures to Rome to try to make a life for himself. The only thing he knows for sure is he doesn’t want to be a gladiator – those days are over. What he does want to do is be a soldier; more specifically lead his own legion someday. Luckily for Vix he has an important contact in Rome who owes his family a favor or two so he heads to Senator Norbanus’s home. It is there that he catches his first look at the intriguing Sabina, who after a while, he remembers from when they were kids and she stole a kiss. Eventually Vix ends up as a guard in Sabina’s home and a secret relationship forms between the two. Little do they know that it will likely last a lifetime.

Sabina is a girl who craves adventure. She may love Vix but he can’t give her the adventure she craves – he isn’t ambitious enough in that regard as all he really wants to do is fight for the Emperor. One of her suitors Hadrian, a ward of the Emperor, catches her attention and they marry. Sabina gets her adventure following her husband on the road in battles and she also manages to get more of Vix. What Vix ends up learning the hard way though is that Sabina craves adventure more than she craves him. The one thing that Vix and Sabina always have and will agree on though is their devotion to Trajan and both will do anything to serve and protect him. Will it be enough though?

The characters in this novel just jump out at you. They have a depth to them and the life in Ancient Rome is described so vividly you feel sure you are experiencing it all with your favorite characters. Vix is by far my favorite. You know by his description that he is gorgeous and strong – all man. He is at times funny and often bawdy but he captures your heart nonetheless. Another character I adored was Titus, a man who isn’t described as handsome but is smart and quotes books all the time. I found him charming and loved his devotion to those he cared about like Vix and Sabina. Of course there are the bad people lurking as usual especially Plotina, the Emperor’s wife. She’s just evil and you would love to see someone squash her at some point. The novel is full of people who you will want to see succeed whether in battle or love.

Empress of the Seven Hills is everything historical fiction should be. If you have an interest in Ancient Rome you will love this novel as well as Kate’s other books as well. She brings Ancient Rome to life in a most interesting way. Her novels are never dull or boring – they are just exciting. It is clear that she has done her research and in her author’s note she tells us that the majority of characters and events are all based on things that have actually happened. The end of this novel leaves you wanting more because it ends on a note that pretty much tells you there is a sequel in the works and I can’t wait! Empress of the Seven Hills is a magnificent novel by Kate Quinn and well worth reading!

Be sure to check out the giveaway I have running right now for your own chance to win a copy of Empress of the Seven Hills as well as check out the excellent guest post Kate wrote for us on ‘A Day in the Life of a Writer’.

Source: Review copy provided by the publisher. No compensation was received for this review and all opinions are solely my own.