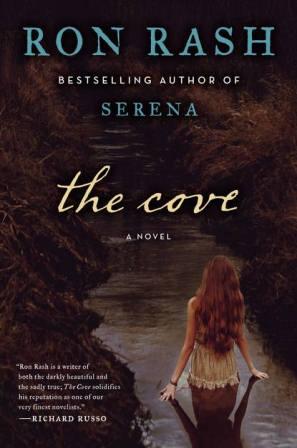 The Cove by Ron Rash is set at the height of World War I and is, from the very first page, a captivating story of love and war. It is in the Appalachian Mountains of North Carolina that we first meet Laurel who lives there with her brother Hank. The area they live in is known as The Cove where it is usually dark, chilly, and gloomy and for the people of Mars Hill, The Cove is a haunted place and nothing but evil comes from venturing there. The two are quite isolated from the community, although it’s Laurel more than Hank, that the townspeople fear. Hank, having fought in the war and lost a hand is now treated with respect within the community but Laurel who was born with a vivid purple birthmark is considered a witch and treated badly by the community on a whole. They believe that something bad will befall whoever has contact with Laurel and while Hank is a good brother, Laurel is very lonely.

So one day when Laurel is laying out laundry she hears a flute playing and of course is intrigued. She follows the music and finds a man playing the most beautiful music she has heard. She doesn’t say anything and slinks away but a few days later she finds him near death, having been stung by a bunch of bees. She takes him back home to care for him much to the dismay of her brother. His name is Walter and he is a mute and apparently can’t read or write either. Laurel wants to know everything about him and tries to communicate through questions and nods. They learn that Walter is a musician and was trying to get back to New York. Things happen and Walter stays on the farm and becomes a part of their family. For Laurel, who has been so lonely, he brings even more – he brings love into her life for the very first time.

That is as much of the plot as I feel comfortable talking about except to say that is anyone really who we think they are. Can someone who always expects the worst to happen to her actually have her life turn around and be happy? Can Laurel really deserve happiness? Are things changing for her and Hank with Hank becoming engaged and Laurel finding love? Will the people of Mars Hill accept her if she marries and has a family? Should she leave The Cove and start over with Walter? Will anything stand in her way of finally getting a life of her own and having someone to love her? These are the questions facing Laurel and add to that the turmoil of the war raging around them and people with agendas their own and you have a very tantalizing story indeed.

Laurel is a great character and you are drawn to her right away because of her vulnerability. She has been shunned by her community and labeled a witch all because of her birthmark and yet she goes on each day hoping for the best. Hank as well is a stand up brother to her who is always looking out for her and always on her side. Then there was Slidell, their neighbor, who has been a friend to both Laurel and Hank through thick and thin. He is the one person who has never shunned Laurel and always wanted the best for her – especially someone or something to make her happy. Then there is Walter who harbors his own secrets and these secrets may be the very thing that could end up destroying them all.

I really enjoyed The Cove by Ron Rash. It is a story that builds upon itself in the most interesting way and keeps your attention throughout. Truth be told I read this book in the space of a day. Each time I had to put it down I just wanted to get back to it and find out what was going to happen. The descriptions of The Cove and the community are vividly portrayed to us and I was most impressed with the writing of Ron Rash. I have his novel Serena on my reader and after reading The Cove I can’t wait to get to it. With how The Cove ultimately played out I know it is a story that will stay with me for a while and I would definitely recommend it to my friends.

I read The Cove by Ron Rash for his book tour with TLC Book Tours. Be sure to check out the other tour stops that will be following mine to see what everyone else will be saying about the book.  The Cove releases tomorrow and you can purchase your very own copy here in the US and here in Canada.

Source: Review copy provided by TLC Book Tours and the publisher. No compensation was received for this review and all opinions are my own.