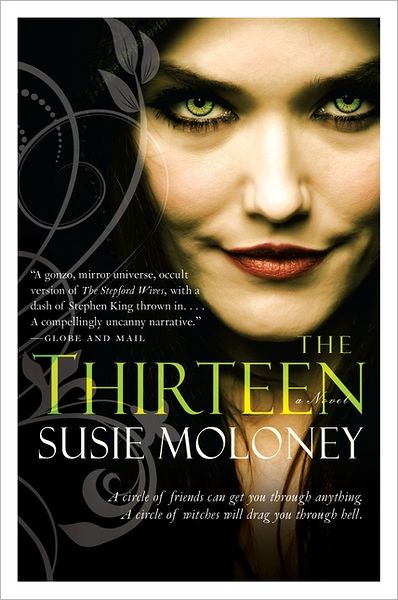 Are you feeling like reading something a little creepy – a story that will hold you in its spell for a little while? Well look no further because The Thirteen by Susie Moloney is just such a read! I read another book called The Dwelling by Susie Moloney years ago and I had really enjoyed it which was why I was initially interested int this one. However I’m always a sucker for a book that involves magic, witches and spells as it is and this novel encompasses all of that and more. The Thirteen was a great read for me – so much so that I spun through 300 pages at an amazing rate of speed with a pounding heart at times.

Paula’s life just hasn’t been going well at all. She’s been fired from another dead end job and she’s dreading telling her daughter Rowan that they are broke and have no good prospects in sight. So when a call comes from her mother’s closest friend Izzy telling her that her mother Audra is sick and in the hospital Paula takes it as the perfect chance to get away for a while and go home. Paula and Rowan haven’t been back to Haven Woods in years because Paula’s mother has always told her she wasn’t wanted there. When they saw Audra it was in the city at their home. However Paula feels she owes it to her mother to go and see how she is and if she can help her at all and besides she doesn’t realize she’s being drawn there for sinister reasons.

Haven Woods is one of those places that is described as the perfect place to raise a family and in fact, Paula had a great childhood; never wanting for anything although the town has definitely experienced its share of horrifying tragedies along the way. It feels strange for Paula being back home though after all that had happened there just before she left as a young pregnant girl. Rowan right off doesn’t like it there and keeps feeling as though the people she’s meeting are just plain weird. All except for Sanderson who was an old friend of her mothers. At his house she feels safe and along with her grandma’s dog Old Tex and Sanderson’s dog Gusto, it is where she is most comfortable. Paula too is finding things a little weird, especially the fact that she can’t seem to find out exactly what is wrong with her mother and that she can never seem to talk to a doctor about it.

Little do Paula or Rowan know what is going on behind the scenes and good thing too or they’d be hightailing it out of town in a big hurry. When Paula’s friend Marla who was her very best friend when they were girls invites her to a party on Friday night she really thinks nothing of it, nor of the fact that she’s insisting Paula bring Rowan. What Paula finds out is that nobody is who they really seem and for Rowan, all the nightmarish thoughts she’s had of Haven Woods seem to be even worse in real life. That’s about all I’m going to say for fear of giving away the best parts of the story – you’ll just have to read it yourself to find out the rest…

The Thirteen is the perfect story to settle in the cozy chair with and just read and read. It’s not really scary – it’s creepy and I do love creepy. If you’re a fan of witches and magic with a little horror thrown in then I’d suggest giving The Thirteen a read. You’ll probably like it just like I did!  Oh, and I do believe she left this novel open for a sequel and I for one would love to see one!

I read The Thirteen by Susie Moloney for her book tour with TLC Book Tours. Be sure and stop by the other tour stops to see what everyone else thinks about the book. You can find Susie on her website and you can purchase your own copy of The Thirteen here in the US and here in Canada.

Source: Review copy provided by TLC Book Tours and William Morrow Paperbacks. No compensation was received for this review and all opinions are my own.