I am really excited to welcome Kim Wright, author of City of Darkness which just released recently, to Peeking Between the Pages today.  I read and reviewed Kim’s first book Love in Mid Air a few years ago and I loved it (my review).  I’ll be reading City of Darkness soon but what I find most fascinating about her new book is how different it is from her first one.  As you can tell from the title Love in Mid Air has to do with love, marriage, etc., while City of Darkness has to do with Jack the Ripper.  Very different – yes – well that’s why I’m so intrigued.  So keep an eye out for my review but in the meantime we have Kim here to talk about this very subject in Switching from Literary Fiction to a Historical Mystery Series… 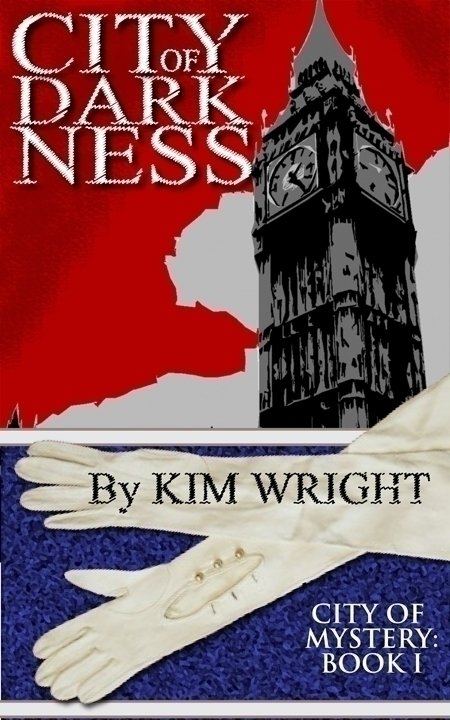 Two years ago – actually two years ago yesterday, to be precise – my novel Love in Mid Air debuted and it was one of the proudest moments of my life. But in the intervening two years, things have changed. The publishing market has been turned upside down, making literary fiction a tougher sell than ever. (And, let’s face it, it never was exactly easy.) Even more to the point, my sense of myself as a writer has changed.

Literary novelists work a long time on each book, most often in isolation and without much feedback. Coming from the world of journalism, where you’re constantly doing research and interviewing interesting strangers, I had always found the “cabin in the snowy woods” environment of literary writing challenging. I like talking to people. I like going places and doing new things. I like having a reason to put on underwear!

So I had a decision to make. Was I willing to spend the next ten years immersed in a novel that would be hard to sell? Umm….no. Did I want to go back to journalism, which put me squarely in the social arena but hampered my creativity? Umm….not so much that either.

Out of my conundrum came my new career as a historical mystery novelist. It’s a natural. By setting my City of Mystery series, which is based on the first forensics unit established in Scotland Yard, in the Victorian era I was able to explore what I consider to be one of the most fascinating periods of British history. The first book, City of Darkness, deals with the famously unsolved case of Jack the Ripper, a crime spree which marked both the birth of the “modern” serial killer who chose his victims seemingly at random, and the birth of forensics, which turned detection from a game of logical deduction to one of scientific inquiry.

Within minutes of coming up with the initial concept, my mind was off and racing. The first book is set in London in 1888. The second, City of Light, will be set in Paris the next year, on the eve of the Exposition Universal, the famous World’s Fair which saw the debut of Edison’s phonograph, Buffalo Bill’s Wild West show, and the Eiffel Tower. From there my fledgling forensics team – under the direction of Queen Victoria herself, who in real life took a surprising degree of interest in crime – will travel to St. Petersburg, Buenos Aires, and New York. All great, exotic settings with more opportunities for research. Road trip!

As you can probably tell, I’m so excited about all this. I’ve always loved both historical novels and mysteries. (As a kid my two obsessions where Henry the VIII and Encyclopedia Brown, boy detective.) Combining the two gives me the freedom of a novelist and the opportunities for detail and authenticity that can only emerge from research. There’s not a muscle in my writing body that this series won’t stretch.

And I hope it resonates with readers. Just as my Scotland Yard detectives are scrambling to adjust to the new demands of the modern age, I think a lot of contemporary readers also feel themselves at a crossroads. We’re being called on to question the old ways and reinvent ourselves at every turn. I used to write characters who were more like myself in a surface sense- in other words, middle-aged middle-class American women. But I find myself totally identifying with my pudgy, pompous, Victorian-era chief detective Trevor Welles. Distilling my thoughts through his perspective has been the most interesting challenge I’ve had yet as a writer.

Thank you so much for this guest post Kim.  I’m so glad you’ve found a new genre that excites you so much and I’m really looking forward to delving into this series!

About City of Darkness by Kim Wright

City of Darkness takes place in 1888 London, where Jack the Ripper roams the streets with impunity and Scotland Yard seems helpless to stop him. The science of forensics is in its infancy but a few detectives – Trevor Welles among them – recognize that they are dealing with a different sort of killer, a “modern criminal” who chooses his victims at random. If Jack is to be caught, he won’t be caught with Scotland Yard’s normal methods of deduction for there is no logic to this madness. The question is no longer “Why was the victim killed?” but rather “How was the victim killed?” For the first time in the history of detection, science is trumping deductive reasoning.

When a twist of fate puts Trevor in charge of the case, he hastily assembles Scotland Yard’s first forensics team: Davy Mabrey, the first bobby on the scene of the grisliest of the murders, whose working class common sense proves an invaluable asset, Rayley Abrams, a cautious intellectual whose future at the Yard is marginalized due to his Jewish heritage, Tom Bainbridge, a medical student with aristocratic connections and a secret drinking problem, and Emma Kelly, sister of the Ripper’s last victim who has a troubled past and a gift for linguistics. The team finds an unlikely ally in the form of Queen Victoria herself, who takes an unusual level of interest in the Ripper case and secretly funds the unit. But will they stop Jack in time to spare Leanna Bainbridge, the young heiress with whom Trevor has fallen madly and improbably in love?

While City of Darkness takes place in London, its sequel, City of Light, will travel to Paris on the eve of the Exposition Universalle, the ultimate World’s Fair which debuted Edison’s phonograph, Buffalo Bill’s Wild West Show, and the Eiffel Tower. The third book, City of Silence, will take place in St. Petersburg where Victoria’s beloved granddaughter Alexandria is on the verge of marrying the young czar Nicolas, much to her grandmother’s dismay. Throughout the series the Scotland Yard forensics team, which serves as a sort of Victorian-era CSI, will circle the world to investigate high-profile cases, most often at the urging of the Queen.

Currently you can buy a copy for your Kindle only. 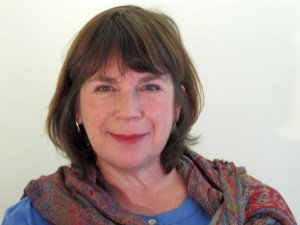 Kim Wright has been writing about travel, food, and wine for more than 25 years and is a two-time recipient of the Lowell Thomas Award for Travel Writing. Love in Mid Air was her first novel.

I have one paperback copy of City of Darkness by Kim Wright up for grabs to my readers.  To enter…

This giveaway is open to US & Canadian residents only (no PO boxes) and I will draw for the winner on Saturday, April 28/12.  Good luck!