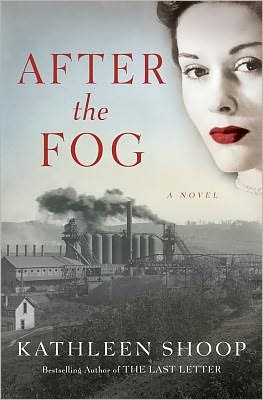 After the Fog by Kathleen Shoop goes beyond just a good story. It tells of a time in history – the killing fog in Donora – which occurred in 1948. This tragedy was not one I had heard about and I found the novel fascinating. From the very beginning I was drawn into the Pavlesic family and felt all of their joys, sorrows, and struggles right along with them. This isn’t a happy book in that it is based on a true event and at the same time portrays a family who is broken but it is these very things that makes this such a good book – it is raw and real but at the same time you will find hope and forgiveness within it’s pages.

Rose Pavlesic is a strong and domineering woman who, as a community health nurse, puts her job before anything else in her life including her husband and two children. It’s not that she doesn’t love them; she just feels more needed in her profession than at home. Rose’s life has not been an easy one. She grew up in an orphanage where she wasn’t treated well and along the way made some bad decisions but when she was introduced to nursing she knew she had found her calling. She’s not a particularly likeable character in that she’s very blunt and straightforward and yet I felt she used this as her shield and I liked her for how real she was.

When the fog really envelops the town of Donora it’s worse than any they’ve ever seen. So many can’t breathe and it’s impossible to walk anywhere, let alone drive. At home Rose’s life is in a shambles so she focuses instead on trying to help the sick but it’s looking hopeless. Then tragedy hits close to home with her own son and Rose blames herself. If not for her trying to control everything in her family her son would never have been put in a circumstance to be harmed. Rose can’t forgive herself. She finds herself alone and deeply depressed and not caring about anything including the job that has defined her most of her life. Slowly, out of the fog of her mind, Rose begins to realize what is important and that is the love of family.

It’s impossible to convey how deep this novel is and I’ve barely scratched the surface. Kathleen Shoop really brings to life this town of Donora and the horrors they faced when this fog descended on them. She also paints a very real picture of the struggles to get proper nursing in small towns and the determination of those strong women who were employed in professions at a time when women were more expected to be home taking care of their families than working. It was also fascinating to read of the killing fog especially in light of how concerned we still are with pollution and clean air. We know of the dangers of pollution but back in 1948 they didn’t and they weren’t aware of the very real dangers of what was happening to them or what would happen even after the fog lifted.

After the Fog was a very good read for me. It starts out a tad slow but soon enough picks up and after that I found it hard to put down.  I absolutely love when an author can weave historical facts with fiction and leave me with a fantastic read! I haven’t yet had the pleasure of reading her first novel The Last Letter but you can be sure I will be soon as  I really enjoyed her writing style.

Be sure to check out the guest post that Kathleen wrote for the blog along with the giveaway that I posted yesterday!

Source: Review copy provided by the Publisher via NetGalley. No compensation was received for this review and all opinions are my own.