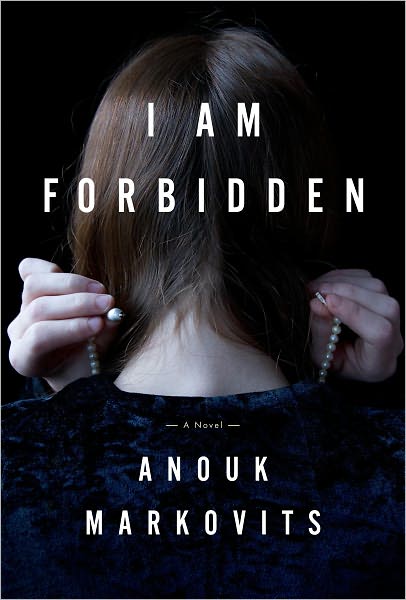 I Am Forbidden by Anouk Markovits is quite the book. To be honest I’m almost at a loss as to what to say about as I was quite overwhelmed by the story. I Am Forbidden takes you deep into the life of a family living in a Hasidic community. I have read novels about Jewish families before but as I’ve learned there are different sects within most religions and the Hasidic Jews seem to be very strict in their beliefs, traditions, customs, and most importantly rules. I found it fascinating to read of lives so very different than mine.

The novel begins around 1947 and the last entry is 2012 and spans the lives of Mila, Josef, and Atara. There are many other characters but I felt that these three were really who the story was built around. In the beginning Josef, a young boy, who having lost his own parents to violence witnesses the same happen to Mila. He grabs her and keeps her safe and helps her to get to the Stern family where her father had told her to go. The Sterns willingly take her in and love her like one of their own. Later Josef is also taken in by the Stern family and eventually is sent away to study with the rabbi in New York.

Atara and Mila are very close in age and bond from the beginning when Mila refuses to talk to anyone but Atara. They feel they are not only best friends, but sisters for life. There is only one problem and that is that Atara is rebelling against the strict life and rules that her family lives by. When the girls are sent to a seminary to study before marriage Atara discovers more and more information that leads her to believe that the life her family wants for her isn’t the one she wants to live. She wants to go on to university and maybe into medicine. Mila, on the other hand, has no aspirations other than to marry and have children and bring them up in the same Jewish faith that she has lived in.

When Josef eventually asks to marry Mila she is overjoyed. The two have shared a special bond since they were young and he saved her from being killed. They marry and all is well but over time things start to fall apart and ultimately Mila makes a decision that sets in motion a horrible chain of events that will affect their lives and their children’s lives in the future. With Mila’s marriage, Atara’s mother focuses on getting Atara married but this just isn’t anything she wants for herself so she flees. Is it ultimately the right choice for her? Is it worth giving up your family completely, as well as the one person who was your best friend and sister?

This novel really is more deep than I can possibly put in words. There are some parts that the average reader might find harder to get through but the bulk of the novel is mesmerizing. I think for those, like me, who love to read about other cultures or religious communities; they will really like this novel. For me I was most interested in learning the way that this particular community lived. I Am Forbidden is the perfect title for this novel as so much is forbidden in the lives of the people living within this religious sect. Women especially seem to really not be treated as much other than baby makers and home makers. Now that’s not to say that all families are the same but this one seemed to be. I know without a doubt I could not live in a strict life with all the rules that they had to abide by.

This isn’t a novel that you can expect to be an easy read because it isn’t. It requires your full attention as it is quite involved. I Am Forbidden will take the reader into another life where you will see what it’s like to belong to a certain religion. It encompasses the importance of family, love, tragedy, and the dangers of secrets and lies and simply taking things to far out of desperation to make things right, not realizing that more than anything they are being torn apart instead. A novel well worth reading!

I have one copy of I Am Forbidden by Anouk Markovits to share with my readers.  To enter…

This giveaway is open to US and Canadian residents only (no PO boxes) and I will draw for the winner on Saturday, June 2/12.  Good luck!

Source:  Review copy provided by TLC Book Tours and Hogarth.  No compensation was received and all opinions are my own.