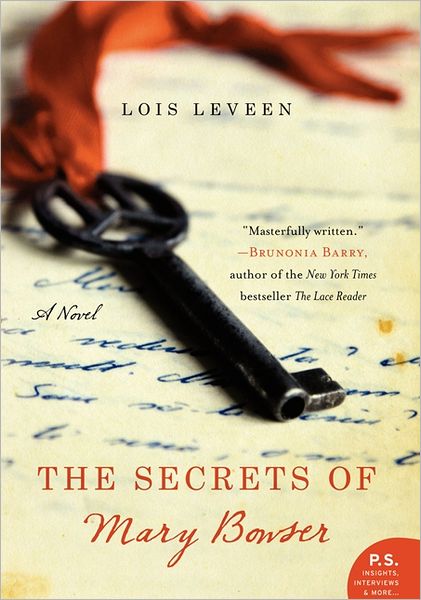 The Secrets of Mary Bowser by Lois Leveen is based on a true story and that alone makes it a remarkable tale. What is more remarkable is the woman, Mary Bowser, that it is based on. She is a woman who risked her own life and freedom to fight for the freedom of all slaves and in the course of things changed history.

Mary was born into slavery as both of her parents were slaves. Mary and her mother worked for the Van Lew’s and her father was a slave for another man. The Van Lew’s were an affluent family with money and as far as slave owners went they were better than most to their slaves. One of the family in particular – Bet Van Lew- was one who didn’t believe in slavery at all. Over time she recognizes just how intelligent Mary is which prompts her to offer to send Mary to Philadelphia for an education. At first Mary’s mother doesn’t want this at all. To lose her daughter isn’t anything she can live with but her husband makes her see the benefits for Mary. Their daughter will be free and maybe able to have a life; certainly more than slavery would ever offer for her.

For Mary, Philadelphia opens her eyes to a different life. She makes a true friend in Hattie and even meets a young man. While she likes him enough he isn’t the type of man she will settle with as he isn’t as passionate about her vision of helping to abolish slavery as she is. When she learns that Hattie’s father is involved in helping slaves get to freedom and they need her help she makes the decision to get involved. She thinks back on how many times her mama told her that Jesus had a vision for her to be something more and to make a difference in life. This is what she feels she was meant for. Then the news comes from Bet that her father isn’t doing the best anymore and she knows what she has to do. She’s meant to go home and spent whatever time there is with her father and to help from the other side in helping to free her people from slavery.

In going home to Richmond another man catches her eye and this time it’s one who doesn’t hold her back but encourages her to live the life she wants to and supports her in her efforts to fight for her and his people as they share this passion together. As the war begins and escalates Mary takes more and more risks for her cause even going as far as to become a slave in the Confederate White House so she can spy on President Davis and report back for to the Union command – to those fighting for the emancipation of slaves.

This is an amazing novel and a story worth telling. It takes us back to a time when owning slaves was just what some people did and so many owners were not good to the slaves they owned. It’s hard to say I enjoy books on slavery because that’s not true and yet I do like to read any I can and it’s because the very idea horrifies me. I can’t understand being cruel to people no matter what their race or religion or anything else is for that matter. The thought of thinking it’s ok to own any human being and hurt them is beyond me. For that reason I will continue to read and talk about these books. The Secrets of Mary Bowser is a story worth telling that is rich in historical detail and well worth reading!

I read The Secrets of Mary Bowser by Lois Leveen for her book tour with TLC Book Tours. Be sure to check out all the other tour stops to see what others are saying about the book. You can find Lois on her website, blog, Facebook, and Twitter. To end I’ll leave you with the book trailer. Enjoy…

Source: Review copy provided by TLC Book Tours via the Publisher. No compensation was received for this review and all opinions are my own.