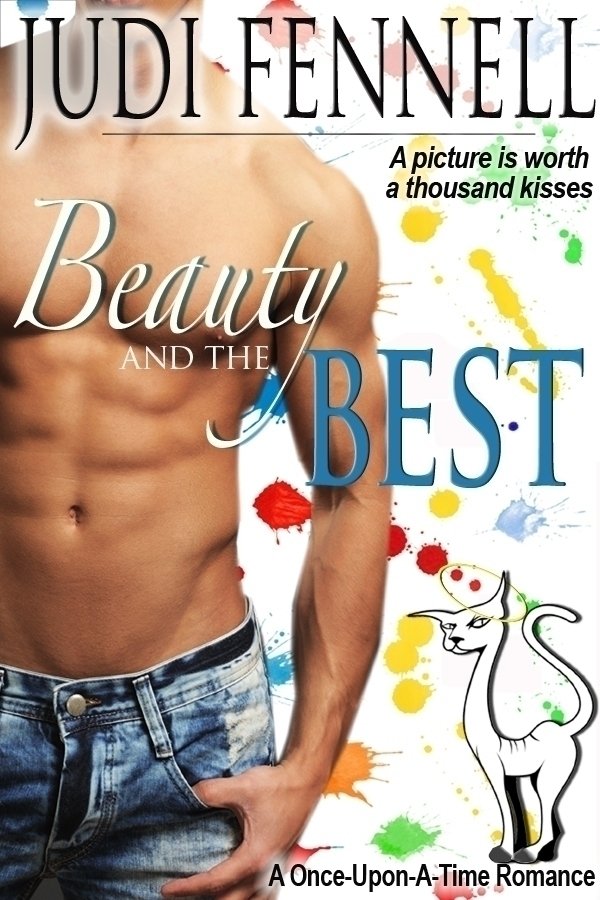 Today I’m featuring Judi Fennell, a long time favorite author of mine who writes quirky and fun romances mixed with magic.  Judi’s books are pure escapism for me and I always love to settle in with one.   Her newest novel is called Beauty and The Best and she’s self-published this one so I’d love to help her get the word out as much as possible.  Stay tuned for my review in the next month or so.  I’ve read everything she’s written so far:  The Tritone Trilogy which includes In Over Her Head, Wild Blue Under, and Catch of a Lifetime and The Bottled Magic series which includes I Dream of Genies and Genie Knows Best with one more on the way.  I can’t wait to read Beauty and The Best but in the meantime I’m going to share a guest post and a giveaway with my readers.  Please welcome Judi as she talks about self-publishing in her guest post entitled Taking the Plunge! …

I took the plunge. I dove into the deep end. I jumped in feet first!

This sounds like it should be an intro to another one of my Mermen books, doesn’t it? But it’s not.

So what did I jump into? And why?

I joined the many authors who are not only publishing with traditional print publishers, but are now self-publishing and I have to say, it’s been quite a fun experience!

Why, you ask? Why would someone who worked so hard to achieve the dream of publication place a piece of work “out there” themselves with no safety net (i.e., advance/royalty payment) and do ALL of the work from writing, working with a professional editor and copy editor, finding a cover artist and spend hours pouring over cover model photos (yeah, that was a tough part of the job, let me tell you…), to writing back cover copy, formatting for all the different e- and print platforms, figuring out pricing, setting up blog tours and promo opportunities, and spreading the word?

Because my readers want my stories.

Publishing has changed a lot in the past year and a half. A LOT. And readers are benefitting. There are stories that, for whatever reason, traditional publishers chose not to take a chance on. No book is guaranteed to “hit” with the market. Can you imagine how those 27 publishers who rejected J.K. Rowling must feel, knowing they had the chance to have brought that series to market and turned it down, deeming it not marketable? Publishing in many ways, is a crapshoot. Some hit, some don’t. But that doesn’t mean the ones that don’t get chosen for that possible hit aren’t worth reading.

This is what happened with my first self-published book, Beauty and The Best. This story was in the American Title Contest, and was the only romance to make the Top 20 Finalists in the Gather.com/Simon & Schuster First Chapters contest out of almost 2,700 general fiction entries. (Press release in NYT about the contest here, and list of Top 20 finalists here.) The story has been around and the opening line (There’s a naked man in my kitchen.) was one people have remembered and continuously asked me about.

So I decided to let Todd and Jolie have their moment in the sun. (Actually, they have quite the moment in the sun-dappled corner of his art studio, but you’ll have to read the book to hear about that!) I had an absolute blast working with Kimberly Van Meter on the cover. She really captured the fun, flirty tone of the book, and the picture of Boots, the cat, with his halo and gleam in his eye was perfect. And Todd isn’t too shabby either. 

What was also a lot of fun was hearing from my readers who have been not-so-patiently waiting for this story. It’s the first release in my Once-Upon-A-Time Romance series, a series that actually spawned my debut novel, In Over Her Head.

How? Well, In Over Her Head is a twist on The Little Mermaid that came about because I’d written Beauty and The Best and If The Shoe Fits (a Cinderella story), and had started Fairest of Them All (yep, Snow White). I decided to twist The Little Mermaid by making him the Mer and her the Human. While writing that story, Reel’s brother Rod popped into my head and voila! The Mer series was born. But Once-Upon-A-Time was always there, hovering in my brain and when I had the chance to put it up myself, I went for it.

And talk about the tie-in with the Once Upon A Time and Grimm television shows, two shows that I am sure to DVR each week. The response has been great for this series and I hope to have If The Shoe Fits out in the near future. (You can sign up for my newsletter if you would like to be notified when it does: email me at JudiFennell@JudiFennell.com.)
I hope you enjoy Todd and Jolie’s story. I truly loved watching these two grow together.

And the opening “naked man in the kitchen” scene, isn’t a bad visual either…

There’s a naked man in my kitchen.

The thought registered just as the terse, “Who the hell are you?” had Jolie Gardener spinning around faster than a figure skater on speed.

He had the nerve to ask this? He of the broad shoulders, six-pack abs, and other, nice, um, parts…

Really. A naked man. In her kitchen.

Well, technically, she was in a naked man’s kitchen. Even more technically, she was in a naked Todd Best’s kitchen—and there wasn’t one hint of self-consciousness or embarrassment on his part. Of course with that body, there shouldn’t be. The guy should flaunt his nudity for the world to see. Which, at present, consisted of one single, solitary person: Jolie Gardener, aspiring writer and personal chef extraordinaire.

“Well?” His hands slammed to his hips.

“You’re naked,” she squeaked, which, really, was the only way to state that kind of obvious.

Jolie tried not to—so unsuccessfully it was pitiful.

As butter sizzled in the new super-slick omelet pan on the top-of-the-line range, Jolie’s gaze alternated between some rock-hard abs and a scruffy eight a.m. shadow while her fingers danced along the speckled granite countertop in search of a napkin, placemat, oven mitt… something.

Mercifully, they scooped up a thick dishtowel that, in her world, would constitute a very plush, very luxurious hand towel from The Ritz or The Four Seasons, but which, here, apparently, was used to soak up water from designer flatware. She dangled it in the direction of Mr. Au Naturel. “Here.”

He placed an empty bottle of Jim Beam on the island countertop with a clink, then took the towel with a grunt. “So, who are you, what are you doing in my kitchen, and would you mind turning around?”

She turned. “I’m the new girl the agency sent over.”

“Hell. There better be some aspirin left,” he muttered beside her, his bare (of course) feet making no sound on the limestone floor.

She peeked over at him.

I’ve been getting a lot of feedback on weird job situations that have happened to people – so far no one has had a naked boss show up, (not that I’d consider that a horror story if said boss was Todd Best, but sadly, most of them aren’t). Some of the stories people have shared just make you shake your head. It’s so true that Truth is stranger than Fiction.

What’s one of your job horror stories?

About Beauty and The Best (from the back cover)

Can she cook up a recipe for love?

Jolie Gardener, personal chef by day, aspiring romance writer by night,
likes to talk and does it a lot. She has to because if she stops, all the pain, disillusionment, and abandonment of her AWOL mother, question-mark father, and foster-care childhood will rise up like a chocolate soufflé on steroids, sweeping away the fragile infrastructure of her life.
But she’s fine. Really. She is.
Or so she thinks.

Todd Best isn’t fine. He knows it. And doesn’t care.
After his wife died—the woman who believed in him when he was a struggling artist—he put painting aside, moved from their home, and lost himself in the minutiae of daily life.
Alone. Private. The way he likes it.
The last thing he needs is some chatty cook seeping into the perfectly bland canvas of his life.
Or so he thinks.

So when Jonathan, a guardian-angel-in-training, turns himself into a kitten to help these two lonely souls find a happily ever after together, it ought to be a piece of cake.
Or so he thinks…

Currently available as an eBook (will be out in print as well soon): Amazon.com and B&N 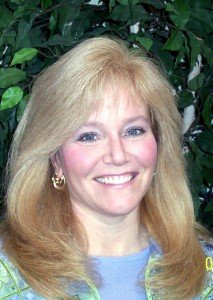 PRISM Award and Golden Leaf Award-winning author, Judi Fennell, has had her nose in a book and her head in some celestial realm all her life, including those early years when her mom would exhort her to “get outside!” instead of watching Bewitched or I Dream of Jeannie on television. So she did—right into Dad’s hammock with her Nancy Drew books.

These days she’s more likely to have her nose in her laptop and her head (and the rest of her body) at her favorite writing spot, but she’s still reading, whether it be her latest manuscript or friends’ books.
Author of “fairy tales with a twist,” pun-filled, tongue-in-cheek, contemporary paranormal romances, starting with the Tritone Trilogy about Mermen and the Humans who love them, her Bottled Magic Series about genies and magic and falling in love, and now her Once-Upon-A-Time Romances, those twisted fairy tales that were the inspiration for her tagline.

Dive into the romance on her website, www.JudiFennell.com, for excerpts, deleted scenes, reviews, contests, and pictures from reader and writer conferences.

I have one copy of Beauty and The Best by Judi Fennell to share with my readers in either print form or eBook – whichever you prefer.  To enter…

This giveaway is open to US and Canadian residents only (no PO boxes) and I will draw for the winner on Saturday, May 12/12.  Good luck!