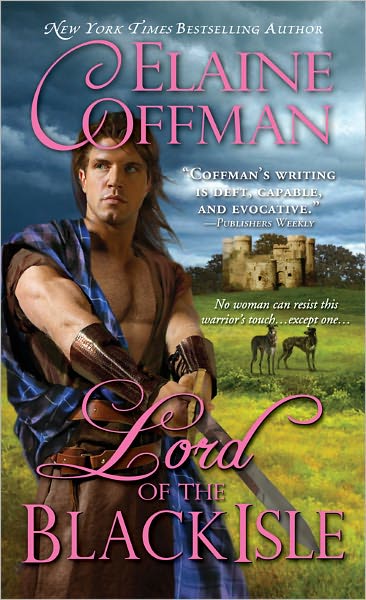 Well by looking at the picture on the front of Lord of the Black Isle by Elaine Coffman, anyone who reads my blog would wonder why I read it because I don’t normally go in for this type of book at all but I felt like reaching outside of my comfort zone this time. So I start reading and it’s just not working for me so I was actually going to give up on a book but I thought I’d try again the next day and what do you know? I started to enjoy it and it wasn’t long before I was invested in the story and the characters.

Elisabeth and her sister Isobella are originally from modern day Austin, Texas but find themselves hurled backward six hundred years to sixteenth-century Scotland. While Isobella is happily married to Alysandir of Marrach Castle, Elisabeth has just had her hopes of marriage dashed. She was to be wed to Ronan, Alysandir’s brother, but on the eve of her wedding he was ordered to marry someone else. Of course Elisabeth is devastated as she truly loved him but she is one of those women who doesn’t wallow in self pity for long and so she decides to focus instead on taking care of people once again as she is a medical doctor in the modern world and of course feels her knowledge could be a great help to the people of this time.

She learns the best place to go is Soutra Aisle and stay with the friars there. No, it’s not common for women to stay with a monastery of friars but Elisabeth is going to learn their ways in medicine and she obtains a letter of recommendation that makes it ok for her to stay with them. However on the way she and her party are ambushed by the MacLeans of Mull and the worst thing is this isn’t the first time she has been kidnapped and held by Angus MacLean who fancies an idea in his head of Elisabeth marrying his son. She manages to escape and instead ends up in the clutches of David Murray, the Earl of Kinloss but this isn’t so bad since he is absolutely the finest specimen of man she has ever laid eyes on.

David delivers her safely to the monastery where she learns what she needs to until she is summoned to Aisling Castle which she learns when she arrives is where David lives to administer medical attention to his sister. Unfortunately she doesn’t make it but there is no way David is letting her out of his sight again, not only for himself but she makes his other sister Ailis happy. After a time he suggests she open a medical clinic in the old abbey which she does and of course she finds herself more and more attracted to David as the days wear on. Is her heart still with Ronan or is she in fact in love with David? Is he the man of her dreams? Is this where she is meant to spend the rest of her life? And are there more dangers ahead for her?

One of my favorite parts of this book was the ghost – the Black Douglas – who was responsible for bringing the girls back in time. He is quite funny and always talking in circles about Elisabeth’s destiny that he drives her absolutely nuts. I liked Elisabeth well enough and David of course sounded like every woman’s dream man. I did have a few issues with the book though and I guess the biggest would be that I found the medical descriptions that are scattered throughout from Elisabeth unnecessary and I really don’t feel they add anything at all to the book, only distract from the story. The only other thing was that this is a part of a series apparently and while I didn’t have any trouble following what was happening in this book I did feel that I have probably missed a bit of background that may have helped me enjoy and follow along better in this one.

All in all, even though it got off to a slow start for me I did end up enjoying this book. I enjoy time travel so that was a plus and that is where I think maybe it would have been beneficial to read the other books in the series – to be there in the beginning when Elisabeth and her sister end up in Scotland. Would I read more by this author? Yes I think I enjoyed this book enough to give another of hers a try!