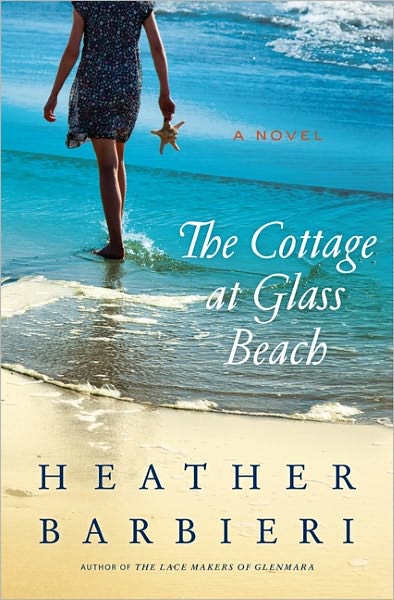 The Cottage at Glass Beach by Heather Barbieri is another winner from this great author! I really enjoyed her book The Lace Makers of Glenmara (my review) so I was anxious to read this one too and I’m happy to report that I really liked it as well! What I love most about her books are the superstitions and myths – that magical quality that is weaved throughout her novels. The Cottage at Glass Beach is a novel about love, loss, and making every moment count.

Nora is reeling from her recent discovery of her philandering husband. Being a politician he has managed to throw the whole family into chaos – they are being followed by reporters and harassed on a regular basis. Having received a letter from her Aunt Maire she decides to pack up and take herself and her daughters Ella and Annie out to the island. Nora needs some space to sort out her life and find out who she is without her marriage and her busy life in Boston. There’s an ulterior motive as well, as Nora’s mother went missing from the island when Nora was just a young girl and Nora would like to find out more about that if she can as it’s always been swept under the rug as something not to be discussed.

Nora finds the island brings her some piece and a fresh perspective but the girls aren’t that thrilled to be there especially her teenage daughter Ella. Ella blames her mother for all the marital problems and the fact that they aren’t with their father. Aunt Maire is wonderful and Nora regrets not having contacted her sooner although it turns out that Aunt Maire had sent letters over the years that Nora’s father threw out. As the days pass Nora begins to learn more about her mother and the rumors that have always surrounded her and then her disappearance. You see the island also has a myth of it’s own and that’s of the selkie which are seals that can take on human form to help people stranded in the ocean. Is it real? Is that how her mother disappeared? More importantly was her mother one? Nora’s mind is full of notions but nothing concrete. Throw in a mysterious man and a strange old woman who seems to have it out for Nora and the story gets even better!

I love Heather Barbieri’s writing. She describes the island so vividly and the feeling of being there by the ocean swimming in it and hearing the seals that it makes you want to pack your own bags and find a place like that for yourself. Her characters were wonderful and I love that when Nora had some space she began to learn things about herself that she hadn’t known before when her life revolved only around her husband. I also liked the small island feel of the novel. All the people know each other and there is always the old folk tales that get passed from generation to generation. My only complaint of the story is I wish the ending would have been developed more fully. It ended at a point where I felt it should have gone on a bit more but that is a minor complaint. All in all I really enjoyed the book and would recommend it as a great summer read!

Source: Review copy provided by TLC Book Tours via Edelweiss. No compensation was received for this review and all opinions are my own.