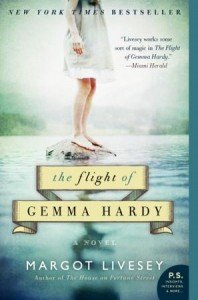 The Flight of Gemma Hardy by Margot Livesey is a novel inspired by Jane Eyre. Being a lover of Jane Eyre I knew I wanted to read this take on on an old classic and I thoroughly enjoyed it! I think Jane Eyre is one of the harder novels to do remakes on and make it fresh but Margot Livesey does just that. From the very first page she grabs your interest and through her beautiful writing style and vivid imagery she keeps it. The Flight of Gemma Hardy is a wonderful adaptation of an old favorite!

Gemma is young when she goes to live with her uncle and his family in Scotland after the death of her father. Her uncle is very kind to her and for many years all is well but then her uncle passes on as well and her life is turned inside out. Her aunt and cousins are not at all nice to Gemma anymore and she finds herself very unwanted and missing her uncle desperately. When an opportunity arises for her to go to a private school, even at ten years old Gemma jumps at the chance but unfortunately it doesn’t turn out to be great escape that she was looking for. Life there is almost worse than it was with her aunt as she’s basically just a maid when her dream was to get an education.

Years pass and the school ends up closing. Of course Gemma has nowhere to go as she certainly can’t go back to her aunt’s home so she tries to look for a job that she could possibly be qualified for. What she finds is a job as an au pair to an eight-year-old girl at Blackbird Hall; a remote place on the Orkney Islands. Her little charge Nell is quite the handful when Gemma arrives. She’s had no schooling and isn’t all that receptive to any either but Gemma doesn’t give up and eventually breaks her shell. She also meets the elusive Mr. Sinclair and falls for him as he does her but the fates are not with them and Gemma learns of a secret Mr. Sinclair has been harboring that she just can’t live with and she once again strikes out for somewhere new.

As Gemma tries to adjust to life without both Mr. Sinclair and Nell she meets a lot of new people who take her under their wing and she begins to make a life for herself by caring for a young boy and studying to go to university. The thing Gemma wants most though is to learn more about her family in Iceland especially if there are any of them left there. So she takes the biggest step of her life and goes there. It is this trip that really makes Gemma whole again and ready to face her future.

Those who have read Jane Eyre can pretty tell where the story will go but it’s the getting there that is what makes this book so good. There are some different twists and turns in this novel compared to the original and that’s what makes it stand out. I found Gemma to be a great character. She was strong–willed and determined to make something of herself and mostly she valued her independence because she had learned at a young age that she had only herself to depend on. If you’re a lover of Jane Eyre and have been looking for another such story to sink into then The Flight of Gemma Hardy is it. If you’re new to Jane Eyre then you may just love this modern day telling of it and be inspired to read the classic one day. The Flight of Gemma Hardy is a novel to curl up with on the couch and savor!

Source: Review copy provided by TLC Book Tours and the Publisher. No compensation was received for this review and all thoughts and opinions are my own.