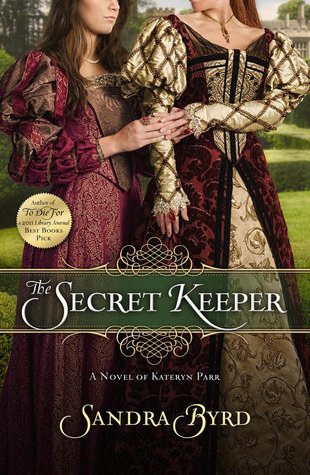 Having read Sandra Byrd’s first book, To Die For (my review), in the Ladies in Waiting series and loved it, I knew that I had to read The Secret Keeper, the second in the series which just released on June 5 as well. This newest offer from Sandra Byrd is sure to please her fans along with any new ones looking for a good historical read. It is brimming full of court intrigue, betrayals, balls, scandal, and love and brings the Tudor world alive in stunning detail!

In The Secret Keeper our story is told by the fictional Juliana St. John but the tale surrounding is rich with historical detail. As her family has a relationship with Thomas Seymour Juliana is lucky enough to be asked to attend Kateryn Parr (Kate) who at the time is Lady Latimer. However soon enough Lord Latimer passes and Kate is pursued by Henry VIII, who as we all know gets what he wants. They marry despite Kate’s long time love for Thomas Seymour and Juliana goes along with Kate as one of her ladies-in-waiting.

Juliana forms a close relationship with Kate and views her as the mother she never had as her relationship with her own mother is not close whatsoever. In turn Kate also trusts Juliana with things she doesn’t trust her other ladies with. Juliana will and does do anything Kate asks of her and her loyalty to the queen never falters. Another unusual thing about Juliana is she possesses the gift of prophecy – she sees things that will happen in the future. She is always deeply disturbed by these visions but she also pays close attention to them and what they might mean for the future.

For Juliana life at court is something she could not have imagined. The balls and feasts astound her, as do all the young men. She meets one who catches her eye; an Irishman named Jamie but he seems quite popular with all the young women yet they seem to have an attraction to each other. However there are other less desirable men who have their eye on Juliana and one such man may take Juliana’s life and destroy it. As life at court continues Juliana returns home for a time but eventually is drawn back to court and to the queen by another vision.

Sandra’s retelling of Kateryn Parr’s life is exactly why I love historical fiction so much. I get a fictional tale of Juliana who is a great character and captured my interest with her loyalty and just how good a person she was but I also get to learn more about a favorite period in history. I love to read anything on Henry VIII’s wives and I hadn’t read a lot on Kateryn yet who was his sixth and final wife so this was a treat as is Sandra Byrd’s storytelling ability. The Secret Keeper is another winner for Sandra Byrd and just another reason I keep coming back for more. I can’t wait for the next novel in her Tudor series! 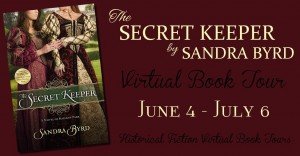 I read The Secret Keeper by Sandra Byrd for her book tour with Historical Fiction Virtual Blog Tours.  Be sure to check out all the other tour stops and you can find Sandra on her website as well as Facebook and Twitter!  Your own copy of The Secret Keeper can be purchased here in the US or here in Canada.

Be sure to pop back in tomorrow as Sandra joins us with a guest post and giveaway of The Secret Keeper!