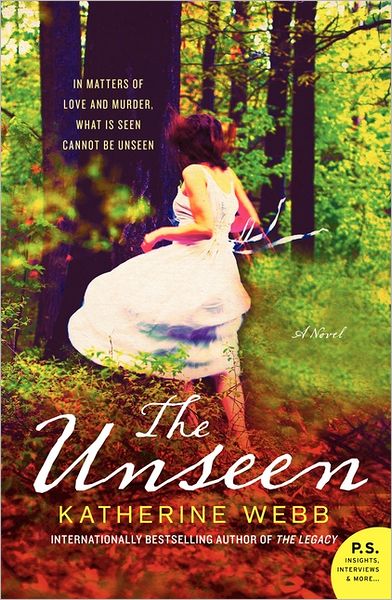 The Unseen by Katherine Webb is a beautifully written story of love, betrayal, and the mystery behind secrets buried deep enough to never be discovered.  I was first introduced to Katherine Webb when I read her  novel The Legacy (my review) and really enjoyed it.  I knew that I’d love to read another of hers and I wasn’t  disappointed at all.  She has a way of weaving the mysterious in with her stories that always keeps me  captivated and reading.

The story begins in the past; in 1911 at the home of the vicar. His wife is awaiting the arrival of her new maid, Cat, a girl who has just gotten out of jail for fighting for women’s rights. Keep in mind this is 1911 and women didn’t have a whole lot of rights including the right to vote and Cat was in a group of women who opposed this and fought for what they thought was something they should have. You see Cat was no ordinary maid really as she had been brought up in The Gentleman’s house and it just so happened that he was actually her father and while he didn’t acknowledge the fact he did educate her and that made her realize how much more she deserved in life.

Fast forward to 2011 and Leah, a journalist, receives a call from her ex-boyfriend about a body they had found. While they have a history together,she still goes and is immediately intrigued by the letters that are found with the dead body of a man and that have been perfectly preserved. She’s been struggling with her writing for a while and she knows that if she can uncover who this man was and what these letters meant that she will have a fantastic story on her hands. Leah decides the best way to find out anything is to head to where the letters came from and while there she meets Mark, a direct descendent of the vicar’s wife. Together they begin to unravel the mystery of this man that was found alone and buried for so long with just these letters for company.

The bulk of the story is back in 1911 where the vicar’s wife Hester tries to come to terms with why her husband Albert doesn’t seem to want more from her other than a brother/sister type of relationship. She knows he is a Godly man but she wants a real marriage and a family and as time goes on she feels quite sure there must be something wrong with her. When Cat arrives Hester finds her to be a strange one but attributes it to her time in jail and the girl gets her job done – if only it didn’t seem as though the girl could look right through her.

Then Robin Durrant arrives on the scene and things are never the same. He is a man obsessed with the paranormal and was invited by the vicar as he has recently seen fairies in the meadow by his home. Robin seems to be a very confident man having come from a good family but he makes Hester uncomfortable and Cat straight out dislikes him.  The  worst thing is that Robin seems to be having more and more control over Albert and as time passes Albert is  becoming more and more strange and withdrawn.  Not only that but he becomes obsessed with Cat, thinking that she is evil and needs to leave his home.  Robin convinces him to let her stay but ultimately that may not  have been the right choice for any of them to make.

There is so much to this story but I really don’t want to give away much of it because it’s really a novel you  need to read.  The story develops more and more as Leah uncovers the mystery of this dead man and how he  relates back to everyone at the vicarage.  While I found some parts slower than I liked this was still a really  good read for me that I enjoyed a lot.  The writing is exceptional and very descriptive which makes you feel as  though you are a part of that world back in the 1900’s.  I think this would probably make a great book club  choice as you could get quite a discussion going on women’s rights in the 1900’s compared to today and then  there are the topics of marriage, desires, and what is right and wrong in various situations.  Most definitely  lots to talk about!

I read The Unseen by Katherine Webb for her book tour with TLC Book Tours.  Be sure to check out the other  tour stops to see what everyone else is saying about the book.  You can pick up your own copy of The Unseen  here in the US and here in Canada.

Source:  Review copy provided by TLC Book Tours via the Publisher.  No compensation was received for this review and all opinions are my own.