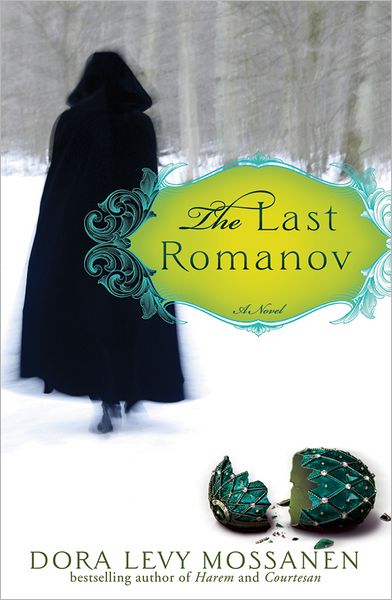 From Sourcebooks: Even now in 2012, one of the greatest mysteries has been the fate of Grand Duchess Anastasia Romanov of Russia, the last of four daughters born to the Tsar Nikolas and his wife Alexandra. After the tragic execution of the Russian Royal family in1918, officials were never able to recover the remains of Anastasia. Tales of her supposed escape from Russia have gripped thousands for decades, fueling speculation that a daughter of Russia’s last sovereign ruler survived the revolution that destroyed her immediate family.

June 18th marks what would be the 111th birthday of Her Imperial Highness Anastasia Romanov. In honor of the lost Duchess I am able to share a copy of The Last Romanov by Dora Levy Mossanen for giveaway to my readers!  So let’s learn a bit about the book and the author and be sure to enter to win a copy of your own at the end of the post!

IN A TIME OF RASPUTIN’S MAGIC AND ROMANOV MYSTERY,
A YOUNG GIRL FINDS HERSELF AT THE HEART OF THE ROYAL FAMILY.

She was an orphan, ushered into the royal palace on

the prayers of her majesty. Yet, decades later, her time

spent in the embrace of the Romanovs haunts her still. Is she

responsible for those murderous events that changed everything?

If only she can find the heir, maybe she can put together the

the love she found. Bursting to life with the rich and glorious

marvels of Imperial Russia, The Last Romanov is a magical tale

of second chances and royal blood.

Read an excerpt
Learn the Backstory
Buy at: Amazon.com, Amazon.ca, B&N, and IndieBound

Dora Levy Mossanen was born in Israel as the country was gaining its independence and moved to Iran with her family when she was nine years old. After living in Israel, where female soldiers wore shorts and carried Uzis, she had a difficult time adjusting to Iranian culture, which required women to conceal themselves under chadors. The first days of her arrival coincided with the 1953 coup of Dr. Mossadegh when the Shah fled to Italy. Streets brimmed with demonstrators, supporting Dr. Mossadegh and dragging down statues of Mohammad Reza Shah. And the very next day, portraits of the Shah were displayed again and blaring microphones announced his return. These were her first experiences in a country of contradictions, a culture rich in legend, mythology, folklore, and superstition.

Her family’s roots go back 2,500 years in Persia, where her first inspiration and invaluable source of history was her grandfather, Doctor Habib Levy, a renowned historian. Dr. Levy introduced Dora to life in Mahaleh, the Jewish ghetto, to the horrors of anti-Semitism, and to the challenges of being Jewish in a Moslem country. The Islamic Revolution of 1979, the fall of the Shah, and arrival of the Ayatollah Khomeini forced Mossanen and her family to leave Iran. They settled in Los Angeles, California and became part of what is now the largest Iranian community in the United States.

Despite being married, raising two daughters, and facing great opposition, Ms. Mossanen went back to school, causing another mini revolution—this one in her own home. She obtained a bachelor’s degree in English literature from the University of California Los Angeles and a master’s degree in creative writing from the University of Southern California.

Dora is the bestselling author of the widely acclaimed novels Harem and Courtesan, which have been translated into numerous languages, and is the recipient of the prestigious San Diego Editor’s Choice Award. She blogs for Huffington Post, reviews fiction for the Jewish Journal, and has been featured in various publications.

I have one copy of The Last Romanov by Dora Levy Mossanen courtesy of Sourcebooks to share with my readers.  To enter…

This giveaway is open to US and Canadian residents only (no PO boxes) and I will draw for the winner on Saturday, June 30/12.  Good luck!