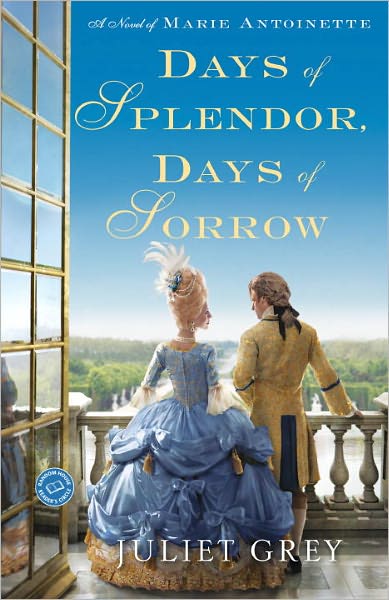 Please join me in welcoming Juliet Grey, author of Days of Splendor, Days of Sorrow,  to Peeking Between the Pages today.  I simply can’t wait to read this one as I read the first one in the trilogy called Becoming Marie Antoinette (my review) last year and loved it!  I become more and more fascinated by Marie Antoinette as I read more about her.  Today Juliet Grey joins us with a guest post entitled Gliding in Marie Antoinette’s footsteps…

So there I was, doing the Versailles Glide in the Hall of Mirrors . . . and apart from my husband placing his cupped hand to the side of his face in an “I don’t know her” gesture—no one seemed to notice! 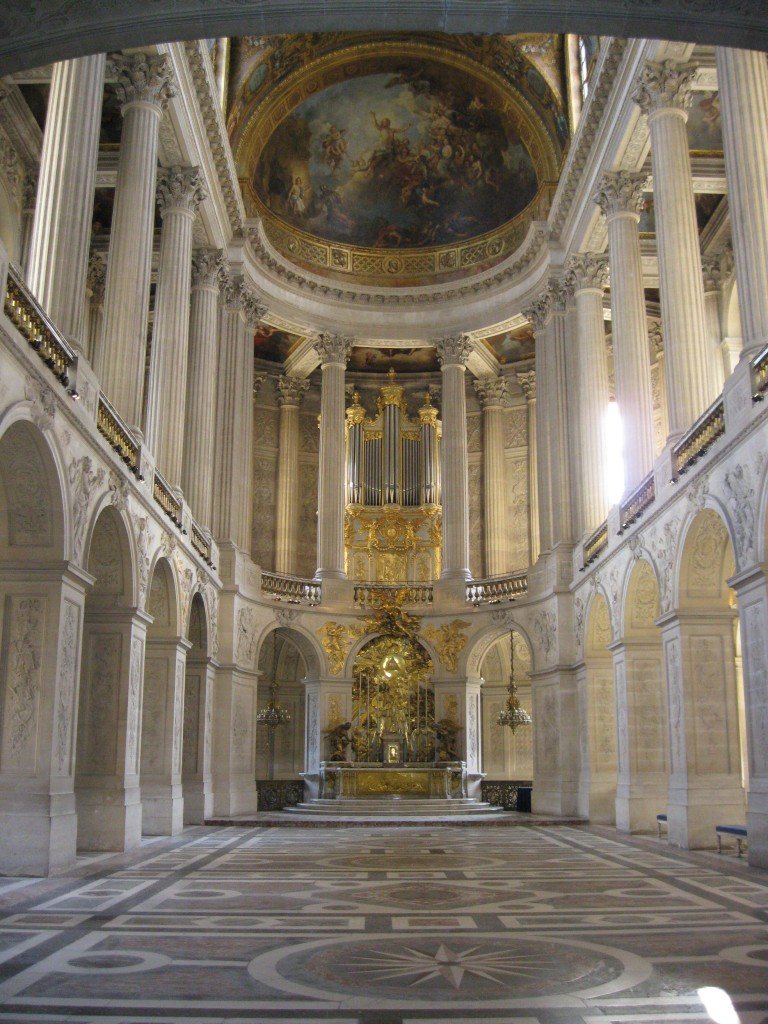 There are many ways to research a work of historical fiction. An author can read a gazillion biographies and articles about the era and the figures she’s writing about, whether in print or online; she can peruse their correspondence (which I used quite a bit of in my Marie Antoinette novels because letters reveal so much about character; in fact, in many cases the author of the letter would say or promise to do one thing in the correspondence and then turn around and actually do something entirely different).  The author can study photographs and paintings to get a sense of how people looked and what they wore (usually when they got dolled up for a portrait). She can visit museums to see the fashions her characters wore (and in some cases, the actual garments) as well as the home furnishings, or tour the types of buildings where they lived and worked to get a sense of the social and domestic history of her characters. If her characters are royalty or nobility, often their actual residences and castles are now museums or preserved historical sites. An author can also, if she’s a tactile or hands-on type of researcher, do some of the same things her characters did, including swordplay, donning period- accurate garments and wigs, learning the language of the fan or the snuffbox, learning and performing the popular dances of the age, and eating some of the same recipes. 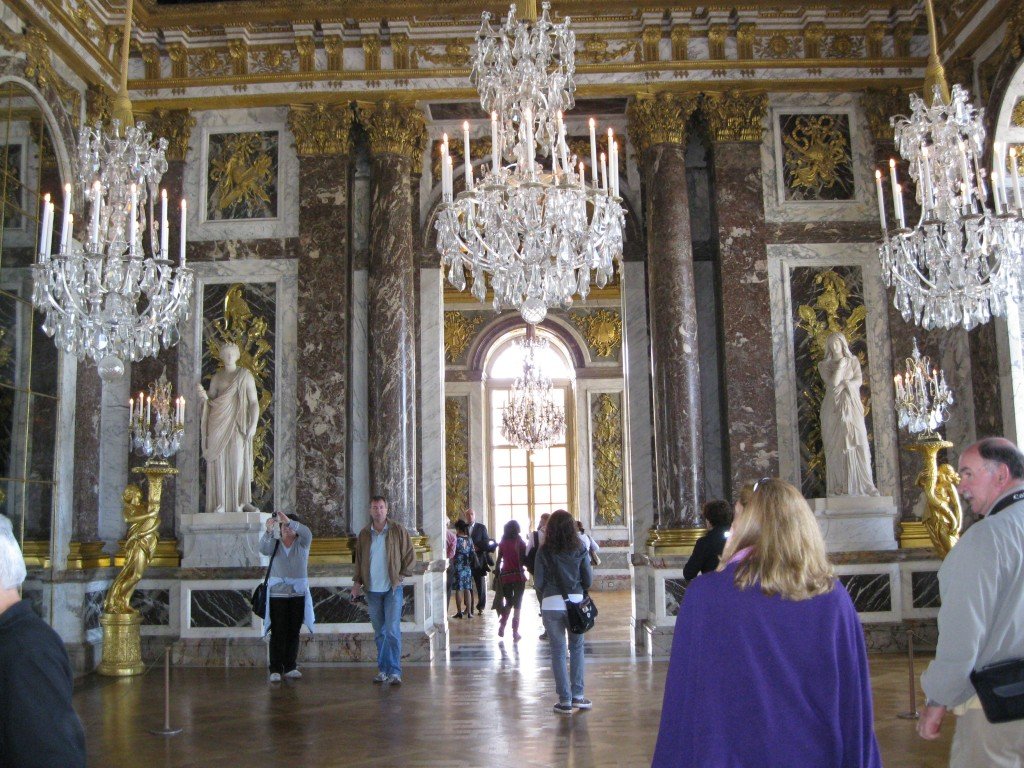 I do all of the above when I write a historical novel. Part of my desire to get a fuller sense of how my characters lived by doing some of the things they did, may stem from my background as a professional actress. I was no stranger to wigs, corsets, panniers, and crinolines when I went from the stage to the page. And, as an admitted history geek and research wonk, I’ve always been fond of visiting places where my favorite historical figures lived, walked, and visited, and I’ve tried to enjoy some of their favorite pastimes. I’ve eaten in a London restaurant where Emma Hamilton frequently dined in order to soak up the atmosphere. I’ve taken a backstage tour of the Drury Lane theatre where the teenaged star of the day Mary Robinson performed in the early 1770s. But until I literally walked a mile (actually a lot more) in Marie Antoinette’s footsteps, I had less of an appreciation of life—and her life—at Versailles. 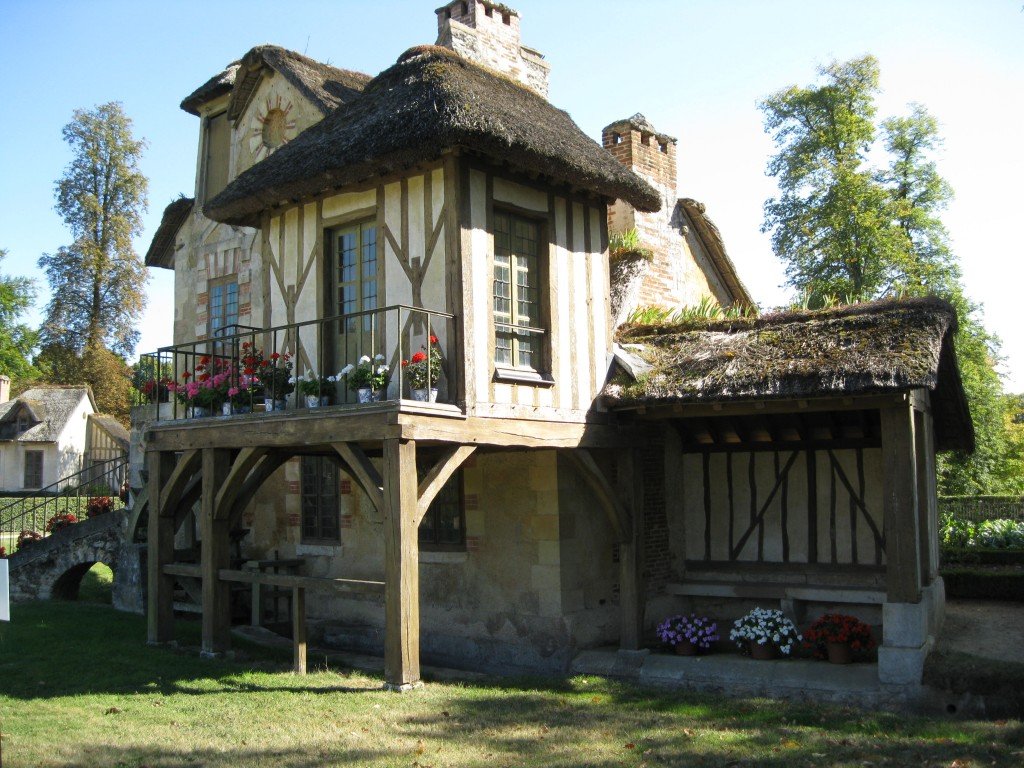 The noblewomen of the Bourbon court had a very specific way of walking (although the men, in their own two-inch heels with their red soles (where do you think Christian Louboutin got the idea?) could stride and strut about as usual. The walk was known as the Versailles Glide and it gave the impression that the women were not walking, but floating an inch or so off the highly polished parquet floor, or gliding about as if they were opulently gowned pull-toys on wheels with an unseen string pulling them forward.

For women of the court, learning to master the Versailles Glide was as important as perfecting the minuet. But for Marie Antoinette, the stakes were higher than they were for any other lady. The queen had already died; therefore, being dauphine—the wife of the heir to the throne—made Marie Antoinette, who arrived at Versailles as a fourteen-year-old Austrian outsider, the highest ranking lady in the land, even before her husband ascended the throne. Consequently, she had to look more elegant and graceful than any other woman; it would have been quite embarrassing if all these French duchesses and marquises and comtesses could perform the Versailles Glide better than she could.

If you have ever visited Versailles, you know that the château itself is vast and it’s exhausting to tour even one floor. The famous Hall of Mirrors alone is 240 feet long. 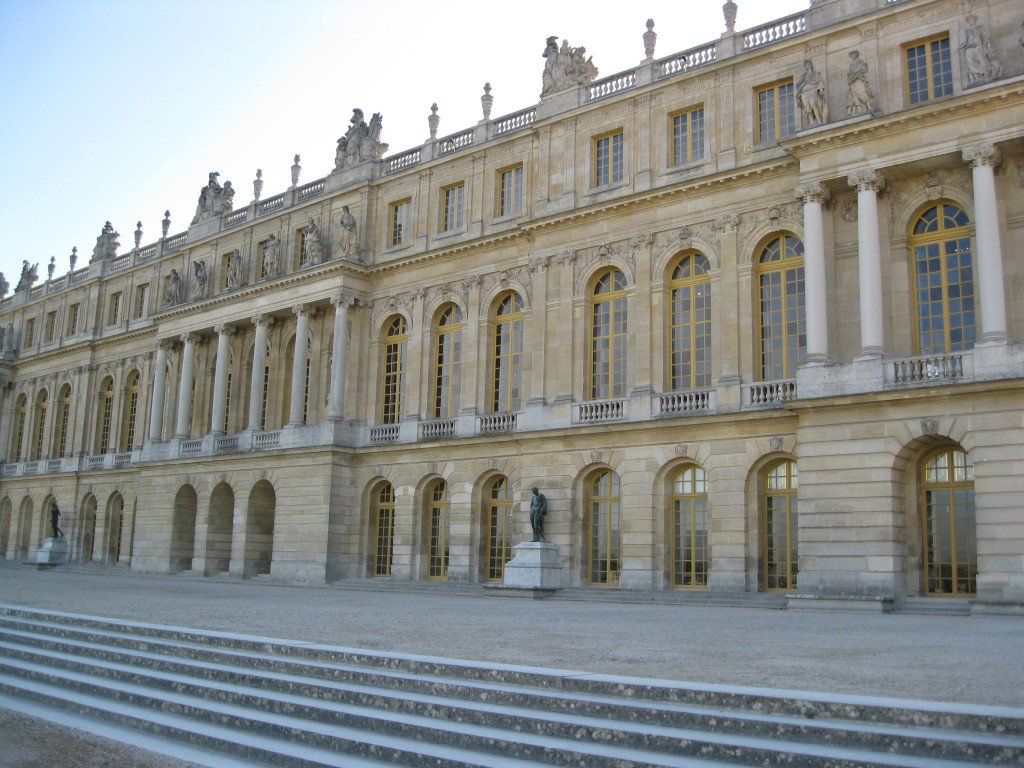 Now, imagine going from room to room throughout the day with your knees slightly bent, your heels raised off the floor a couple of inches (and the higher the shoe heel the harder this is to achieve) and all your weight on the balls of your feet as you shuffle forward without your heels ever touching the ground, still keeping your knees soft and slightly bent, all the while maintaining your elegantly regal posture—a ramrod-straight spine without tensing your neck and shoulders. Plus, you can’t look like you’re shuffling your feet or taking stuttering steps. And you can’t bounce up and down like a carousel horse, which is what your body naturally wants to do when your knees and feet are appropriately bent and your weight is pitched forward.

Add to these difficulties of maintaining an even keel: a pomaded and powdered coiffeur curled and teased sometimes three feet off your scalp with all manner of tchotchkes affixed to it or threaded through it from additional lengths of false hair to pearls and gemstones to feathered headdresses to artistic tableaux depicting a deeply personal scene for the wearer, or a current event that was the talk of
toute Paris. And don’t forget tight sleeves and heavily embellished bodices and skirts that were widened with the addition of panniers beneath them so that the woman might not fit through a doorway without turning sideways and sidling into the next room. 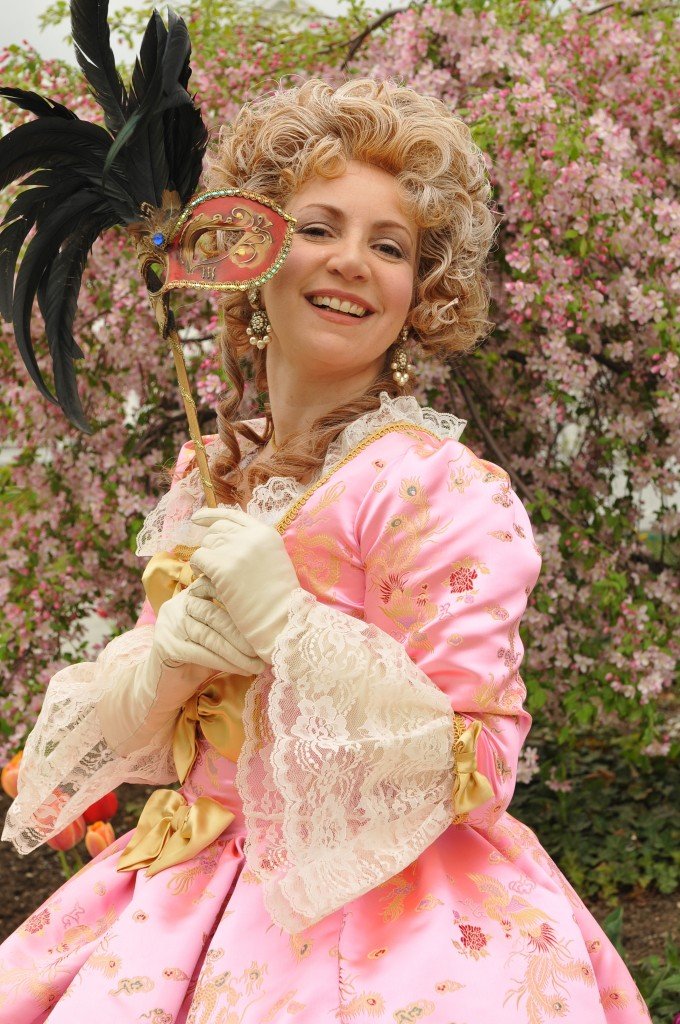 Of course there was no sidling with the Versailles Glide. You sailed straight ahead with your eyes up and your Watteau-style train catching a breeze when you got up to speed. As Marie Antoinette traveled with an entourage behind her, you can just picture all those rustling taffeta skirts as their wearers swished along the hallways.

I also had a corset made for me replicating the style from 1770, the year Marie Antoinette was married, as well as other period-appropriate/accurate undergarments. And of course I walked in Marie Antoinette’s footsteps both throughout Versailles and in the city of Paris, including a visit to the gloomy Conciergerie where she was imprisoned her final months. At Versailles it seemed imperative, even though I was not of course in an 18th century costume, to mimic the Glide. Even as Maria was teaching me the technique I found it exhausting to never put my entire foot down and to keep my weight pitched forward on the balls of my feet—without looking as though I was falling forward. And keeping your knees bent the whole time is murder on your shins. By the end of ten minutes I was exhausted. So how did all these women wearing much heavier clothing (and jewelry!) than we do, and with top-heavy hairstyles and headdresses) manage to sustain the walk for several minutes at a clip in order to get from one part of the palace to the other—and—to make it seem utterly effortless? 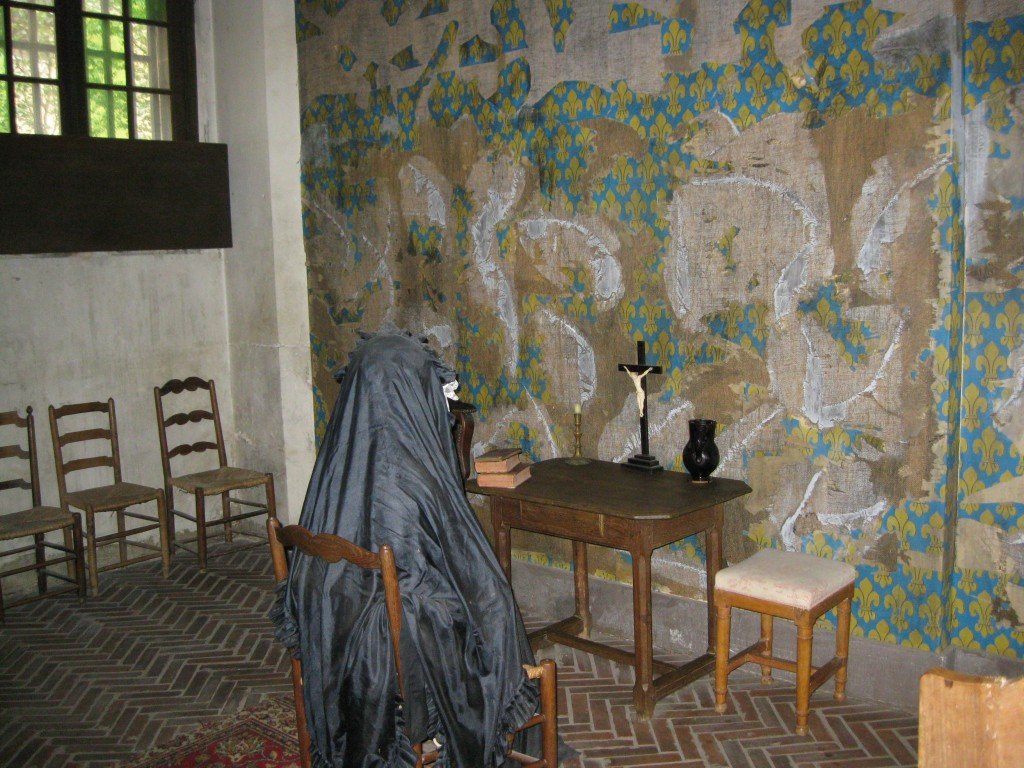 The short answer is: I don’t know. Because I found Gliding from one end of the Hall of Mirrors to the other to be a physical challenge. I suppose one got used to it over time and built up stamina. In this case, I was happy to suffer for my art to get a true sense of how it must have felt to walk in Marie Antoinette’s shoes for a day. While I researched the changing fashions of Marie Antoinette’s life and times, including the trends she set herself—and I incorporated the backlash she received for some of her style choices as well as her extravagance into the novels in my Marie Antoinette trilogy (although I can’t think of any 17th or 18th c. French queens who dressed on a budget!)—it wasn’t until I tried to mimic the ways she achieved the standards of beauty, particularly the Versailles Glide, that were de rigueur at the French court that I came to fully appreciate the physical cost to the age-old question: “What price beauty?” and how genuinely painful it might have been to be Marie Antoinette. 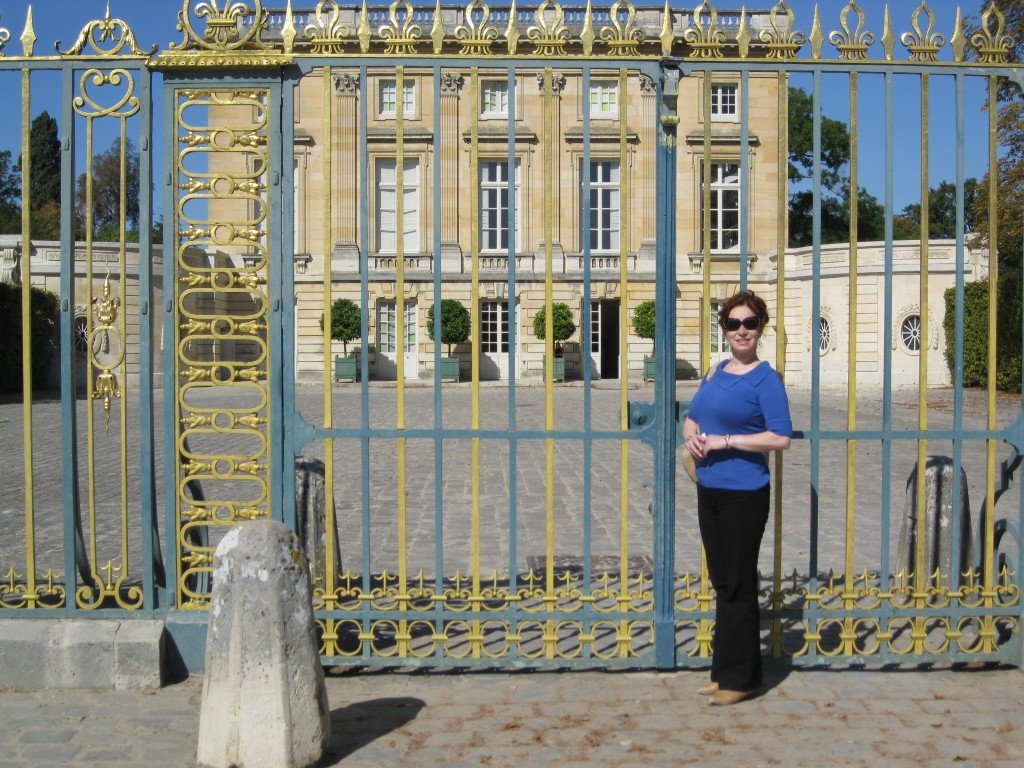 Wow Juliet, thanks so much for this fantastic guest post!  It was fascinating and I’d sure love to visit and walk in Marie Antoinette’s footsteps myself!

About Days of Splendor, Days of Sorrow (from Random House)

A captivating novel of rich spectacle and royal scandal, Days of Splendor, Days of Sorrow spans fifteen years in the fateful reign of Marie Antoinette, France’s most legendary and notorious queen.

Paris, 1774. At the tender age of eighteen, Marie Antoinette ascends to the French throne alongside her husband, Louis XVI. But behind the extravagance of the young queen’s elaborate silk gowns and dizzyingly high coiffures, she harbors deeper fears for her future and that of the Bourbon dynasty.

From the early growing pains of marriage to the joy of conceiving a child, from her passion for Swedish military attaché Axel von Fersen to the devastating Affair of the Diamond Necklace, Marie Antoinette tries to rise above the gossip and rivalries that encircle her. But as revolution blossoms in America, a much larger threat looms beyond the gilded gates of Versailles—one that could sweep away the French monarchy forever.

About Juliet Grey (from Random House)

Juliet Grey is the author of Becoming Marie Antoinette. She has extensively researched European royalty and is a particular devotee of Marie Antoinette, as well as a classically trained professional actress with numerous portrayals of virgins, vixens, and villainesses to her credit. She and her husband divide their time between New York City and southern Vermont.

GIVEAWAY DETAILS  (US only)

I have 5 copies of Days of Splendor, Days of Sorrow by Juliet Grey to share with my US readers only.  To enter…

This giveaway is open to US residents only (no PO boxes) and I will draw for the winners on Saturday, June 23/12.  Good luck to all!