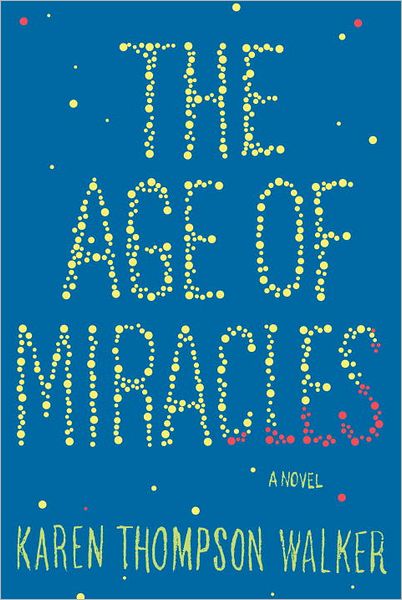 The Age of Miracles is Karen Thompson Walker’s fiction debut novel depicting a scenario of the approach of the end of the world. The earth’s rotation is slowing down causing widespread panic and what makes this novel so good is that as you are reading you can really picture something like this occurring.

Julia is eleven years old living in a California suburb when her world changes forever. All of a sudden there is a breaking news announcement that the earth is slowing down and fast. At first it doesn’t seem to be such a big deal but soon it becomes apparent that the ‘normal’ 24 hour day doesn’t exist anymore. Soon there are the people who live by the clock time which means they are still living by the 24 hour clock regardless of how long the day actually is and then there are those that decide to live in the real time which has them still living normally by sleeping when it’s dark and living while it’s light. However neither really works too well as the days and nights become longer and longer.

As the days wear on people begin to suffer from gravity sickness later called the syndrome, the birds are dying, and the consequences of the slowing, as it’s come to be called, are becoming more and more apparent. The news reports are talking about the very real possibility of food shortages and power failures; not to mention the fear of radiation. This novel really made me stop and wonder about what I would do if all of a sudden something like this happened. I can’t even begin to imagine a seventy- two hour day and even worse if it was extremely hot or cold.  What I do know is I would be thrown into an extreme panic in no time at all.

The story is told from the point of view of Julia and in so many ways this is novel is also a coming of age story for her. She’s just coming into being a teenager and being an only child she’s always been a bit of a loner. When the slowing begins her friend Hanna moves away and Julia is left on her own as she’s never been able to make friends easily. Then Seth, a boy she’s had a crush on, begins to pay attention to her and they start to hang out. Even in the midst of a catastrophe young love still blossoms but can it last in the face of the end of times?

I enjoyed The Age of Miracles quite a bit. I find novels that deal with the end of the world scary and fascinating all at the same time. I really found the premise of this book believable because I could actually see that something like this could happen but what I didn’t believe as much was how calmly it seemed that people dealt with it. I would have expected a lot more panic and looting and such especially with the power outages. I think maybe a little more development in these areas would have made the story a lot more plausible. Either way I still really enjoyed the story and it was a quick read for me as when I did put it down I wanted to get back to it to see what was going to eventually happen. If you enjoy novels about the end of the world then pick up The Age of Miracles and give it a try!

I have one copy of The Age of Miracles by Karen Thompson Walker to share with my readers.  To enter…

This giveaway is open to US and Canadian residents only (no PO boxes) and I will draw for the winner on Saturday, August 4/12.  Good luck!

Source:  Review copy provided by TLC Book Tours and the Publisher via NetGalley.  No compensation was received and all thoughts and opinions are my own.