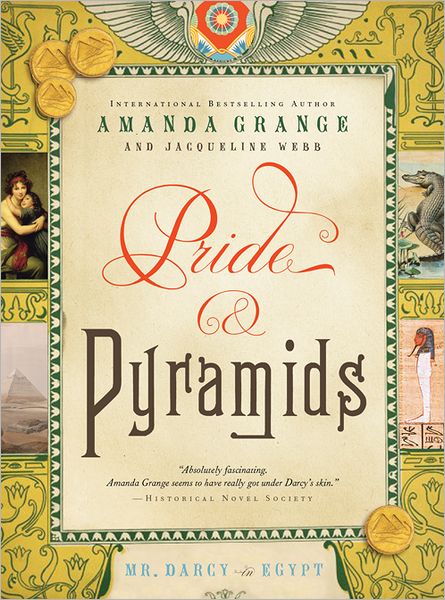 Let’s welcome Amanda Grange, author of Pride and Pyramids: Mr. Darcy in Egypt, to the blog today!  I have only had the pleasure of reading one of Amanda’s books and that was Mr. Darcy, Vampyre and I just loved it so I was looking forward to reading this one.  My review will be up tomorrow and I have to say it’s another winner for me.  Amanda’s books are such fun!  Today she joins us to talk about her love of all things Austen...

I first fell in love with Jane Austen when I read Pride and Prejudice at the age of thirteen or fourteen. I absolutely loved the book, and not just for the romance. I loved it for the humour, the recognisable characters and the memorable lines. I went on to read all Austen’s novels very quickly and liked them in greater or lesser degrees. I wasn’t old enough to appreciate Persuasion or Mansfield Park, but I adored Sense and Sensibility, Emma and Northanger Abbey.

A few years later I saw my first Pride and Prejudice adaptation, the BBC serial starring David Rintoul as Mr Darcy. He was everything I thought Mr Darcy should be: tall, proud and arrogant. Elizabeth Garvie was a delightful Lizzy Bennet, teasing and sparkling. I’ve watched the adaptation more recently and it looks a little formal by today’s standards but it still holds a special place in my heart.

I continued to read Austen’s novels on and off over the next twenty or thirty years, always finding something new in them. I think that’s one of the reasons they stand the test of time, because there is always something new to find. As a teenager, I loved Marianne Dashwood but as I grew older I came to appreciate Elinor more and to admire her common sense. I found I could identify with Anne Elliot, instead of thinking she was very elderly, as I had when I was thirteen! I admired her quiet courage, which allowed her to endure a broken heart uncomplainingly and I felt a sense of deep satisfaction when she found her happy ending.

I loved seeing all the adaptations, which brought new facets of the novels to the fore, and then I started writing my own adaptations in the form of the heroes’ diaries. It’s all brought me a great deal of pleasure, and although I love many novels, it’s only Jane Austen’s books which fill me with an urge to write about her characters and wonder about what happens next. There is something magical about her books which I can’t quite put my finger on. Maybe it’s because they are all so different, whilst retaining the core elements of humour and romance. They have very different heroes and heroines, but they all have that indefinable Austen magic.

Thank you so much for sharing your thoughts with us Amanda.  I have to say that I didn’t start reading Austen novels until much later in life and in the last few years I’ve really come to enjoy all the different adaptations that are out there – my favorites being Pride and Prejudice ones of course!  I agree, there is something magical about them!

The Darcys are pulled into the Regency craze for Egypt in this romantic and adventurous Pride and Prejudice continuation.

When Elizabeth, Darcy and their lively children go to Egypt with Colonel Fitzwilliam’s younger brother, romantic interludes between Darcy and Elizabeth intertwine with the unraveling of a mystery dating back to an ancient Egyptian woman. They find long-hidden treasure, thwart a theft and betrayal by the ever villainous George Wickham, and lay to rest an ancient ghost.

Read an extract
Buy at: Amazon.com, Amazon.ca, and B&N

Amanda Grange was born in Yorkshire and spent her teenage years reading Jane Austen and Georgette Heyer whilst also finding time to study music at Nottingham University. She has had eighteen novels published, including six Jane Austen retellings which look at events from the heroes’ points of view.

Woman said of Mr Darcy’s Diary: “Lots of fun, this is the tale behind the alpha male,” whilst The Washington Post called Mr Knightley’s Diary “affectionate”. The Historical Novels Review made Captain Wentworth’s Diary an Editors’ Choice, remarking, “Amanda Grange has hit upon a winning formula.” Austenblog declared that Colonel Brandon’s Diary was “the best book yet in her series of heroes’ diaries.” Her paranormal sequel to Pride and Prejudice, Mr Darcy, Vampyre, was nominated for the Jane Austen Awards.

I have one copy of Pride and Pyramids by Amanda Grange to share with my readers.  To enter…

This giveaway is open to US and Canadian residents only (no PO boxes) and I will draw for the winner on Saturday, August 4/12.  Good luck!