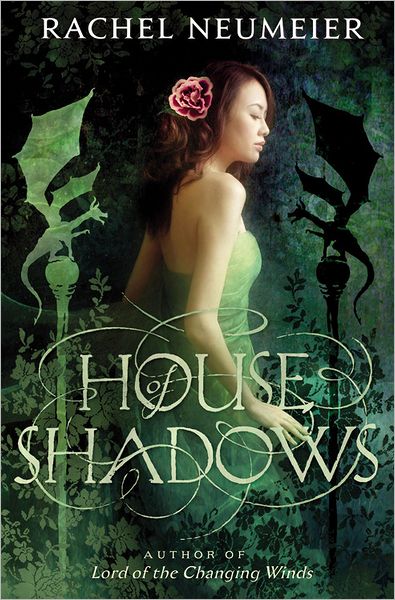 House of Shadows by Rachel Neumeier is a mix of fantasy and magic that will delight readers of this genre. As the novel opens a merchant with eight daughters passes away unexpectedly. The girls are devastated and trying to figure out a way that they can hold on to the family business. One of the girls was to be married but now without their father it’s unlikely the boy will want to marry her unless somehow the girls can come up with a dowry for her. Ultimately they decide that at least two of them will have to be sold and it is on these two girls – Karah and Nemienne that the story focuses on.

At the time and place that this novel takes place there were places called keiso houses. These girls are groomed to be flower wives (a second wife you could say) and they are treated very well. This is the best place for the gentle Karah as she is stunningly beautiful although at seventeen already a bit old for the keiso house. However as soon as the house mother sees her, she knows she has to have Karah for her house. And while it’s true the girls are treated well by the house mother that doesn’t necessarily mean that jealousies don’t run rampant with the other girls in the house and such a pretty girl coming in the house is sure to set everyone on edge.

Nemienne however is not ugly by any means but her beauty isn’t such that would make her successful in a keiso house. She is noticed tough for her very unusual eyes and sent instead to the house of a mage in the hopes that she can become his assistant and learn magic. While Nemienne’s older sister is horrified by this and the creepy house that they find themselves in Nemienne assures her that she will be ok. Truthfully Nemienne has always felt she was different and as soon as she sets foot in the Mage’s home she knows she is in the right place and wants to stay.

As both sisters learn to get along in their new surroundings there is a war brewing behind the scene in which we have mages, sorcerers, kings, princes, and even a dragon. As that heats up both girls find themselves mysteriously being pulled into different worlds. Who can they trust other than each other? Into this scene we also meet the Mage, Taudde who was a pretty good character and Leilis from the keiso house. Leilis at one time was to be a keiso girl but something happened to prevent that but she stayed on at the house helping out. She manages to catch the eye of Taudde and gets drawn into a scene quite beyond her imagination.

House of Shadows was an okay read for me. I enjoyed it while I read it but it isn’t a story that will stick in my mind. I did like the three girls though – Karah, Nemienne, and Leilis. I think I may have enjoyed the story more had it focused a bit more on the magical element. I liked reading about the Mage and his magic or about the different doors that would appear from nowhere so I would have liked more of that. If you’re a reader of fantasy and love magic then House of Shadows is one you may enjoy!

I read House of Shadows by Rachel Neumeier for her book tour with TLC Book Tours.  Be sure to pop by and check out the other tour stops and Rachel’s website as well.  Your own copy of House of Shadows can be purchased here in the US and here in Canada.

I have one copy of House of Shadows by Rachel Neumeier up for grabs to my readers.  To enter…

This giveaway is open to US and Canadian residents only (no PO boxes) and I will draw for the winner on Saturday, August 25/12.  Good luck!

Source: Review copy provided by TLC Book Tours and the Publisher via NetGalley. No compensation was received and all thoughts and opinions are my own.