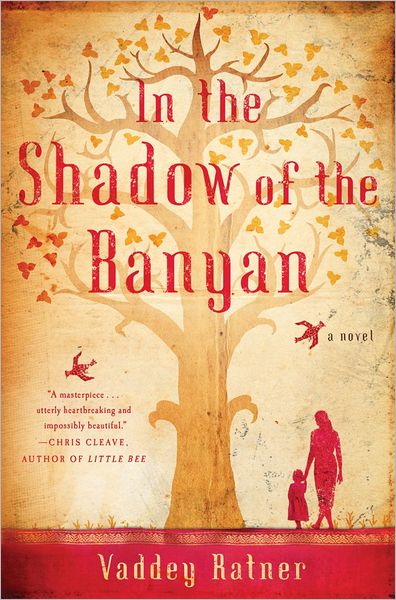 I don’t know when I was last moved by a novel as I have been by In the Shadow of the Banyan by Vaddey Ratner which releases tomorrow by Simon & Schuster. The novel is based on the author’s own experiences during a time when Khmer Rouge regime committed horrific things to the people of Cambodia. This novel shook me to my core and I can’t stop thinking about it – the horror of how people were treated and what they lived through. What shines through in every page though is the resilience of the human spirit and the love of family no matter the circumstances.

This story is told through the eyes of seven year old Raami as her safe and comfortable life is turned upside down. When Raami learns that a war has overtaken her world she really doesn’t understand. What she does understand though and feels is her parent’s fear and uncertainty. When they are ordered from their home with very few belongings Raami is terrified. She can never begin to imagine the life that is ahead of her. Over the next four years she faces things that most of us can’t imagine. Her life is very uncertain and horrifying but the one thing that she keeps falling back on is her father’s words to her that she can soar above anything and get past it to a better life. This novel, although told through the eyes of a child is disturbing but I think so important too. This is a heartbreaking story, that, being based on truth, makes you think of this time in history that should never be forgotten for all the people that were lost which was one to two million.

What really hit me about this story is that the Khmer Rouge regime in Cambodia was between the years of 1975-1979. I was nine years old and to this day had no idea this was going on. To think that I was living my life day to day while people were suffering so much really hurts me deeply. Nobody should have to live through the atrocities that the Cambodian people lived through but the children is what affected me the most. To lose their parents, family, friends and then be put put to work and starved. Well I can’t imagine it and wouldn’t want to but my heart goes out to each and every one who has ever lived through any such thing.

The author said that she wanted to write this book to give voice to the memory of her father who she lost and to all those who were silenced in this horror. I commend her for bravery in reliving this horror to put this story out there. I wouldn’t hesitate to recommend this novel. To read it makes you value even more how you grew up and what you have now. I cried when I turned the last page on this book knowing how deeply it affected me. It is without a doubt an excellent and beautifully written novel.

I would like to end the review with a quote from the author’s note:

“For all the loss an tragedy I have known, my life has taught me that the human spirit, like the lifted hands of the blind, will rise above chaos and destruction, as wings in flight.’ (author’s note, uncorrected proof – final copy may be different)

Review copy provided by Simon & Schuster via NetGalley. No compensation was received and all thoughts and opinions are my own.