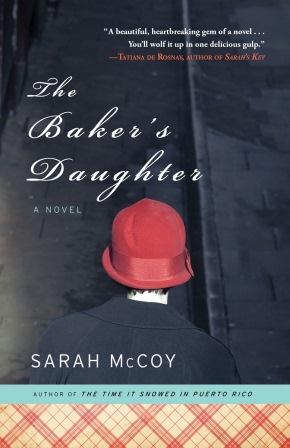 The Baker’s Daughter by Sarah McCoy is a novel that takes us on an emotional journey that brings alive a time in history when a war was raging and people were suffering. And yet there was love and hope for a better future. I love the way the novel alternates the past and present while bringing them both together. This was one of those novels that is still in my thoughts and while reading it I hated to put it down as I had become so entrenched in everyone’s past and present lives.

In 1944 Elsie is a teenager living in Nazi Germany towards the end of World War II. Elsie’s family owns a bakery and has, for the most part, been luckier than most. Josef, a Nazi officer, has had his eye on Elsie and wishes to marry her so the family has lived under his protection. As a young lady Elsie is looking forward to her first adult dance with Josef and all goes well until Elsie is attacked by another officer. A voice in the night and then Josef saves her but when she returns home later she is shocked to find the young boy who essentially saved her life right there at her own home. The problem is that he is a Jew and she would be jeopardizing herself and her whole family by helping him but she just can’t turn him in. He put his life on the line for her and she will do the same so she hides him behind the walls of her bedroom and cares for him the best she can until the day comes that she can’t any longer.

That day is the day that changes Elsie’s life because something happens that can never be taken back. The only positive thing from that day is that the end of the war came as well and they had the American’s invading their space instead. While everyone else seemed terrified of the Americans Elsie wasn’t. She tried talking to them and feeding them bread and goodies from the bakery. She makes friends and even ends up working with them for a while. Through a series of events it is also here that Elsie meets her future husband Al who will take her away to America and a different life.

Fast forward to present time and Elsie owns and runs a bakery in Texas with her daughter Jane and at the same time we are introduced to Reba who is there to run a Christmas story on Elsie and the bakery. After several unsuccessful attempts to contact Elsie via telephone Reba decides to just go to the bakery and see her for herself. As she begins asking Elsie questions she finds herself becoming more and more interested in this woman and her life. So begins the friendship between these three women and in that friendship Reba finds that while listening to Elsie reminisce on her past, she too confronts her past and moves forward.

I loved the characters in this novel with Elsie being my favorite. From the time she was a teenager to the present at eighty years old she was the type of woman who just grabbed your heart and didn’t let go. Elsie was a fighter; someone who didn’t give up when the going got tough. As well I always enjoy reading novels that depict the war and those who survive it so that was another element of this book that I liked. This is a beautifully written novel and it really is a hard one to review as the story covers so much in terms of emotions and story lines. I do recommend The Baker’s Daughter especially if you enjoy stories to do with the war. This is one book that is heart breaking and yet hopeful as well. I’m very glad to have read it!

The Baker’s Daughter by Sarah McCoy is on tour with TLC Book Tours so be sure to check out the other tour stops to see what everyone else is saying about the book. Sarah can be found on her website, blog, Facebook and Twitter if you’d like to learn more about her work or contact her. Your won copy of The Baker’s Daughter can be purchased here in the US or here in Canada.