I’ve got a great historical fiction read to spotlight for you all today!  It is The Shadow Queen:  A Novel of Wallis Simpson, Duchess of Windsor by Rebecca Dean which releases on August 14!  I can’t wait to read this one and what about the cover – isn’t it gorgeous.  I really like it.  I’ll give you some information on the book, the author, and don’t forget to check out the giveaway for your chance to win one of two copies! 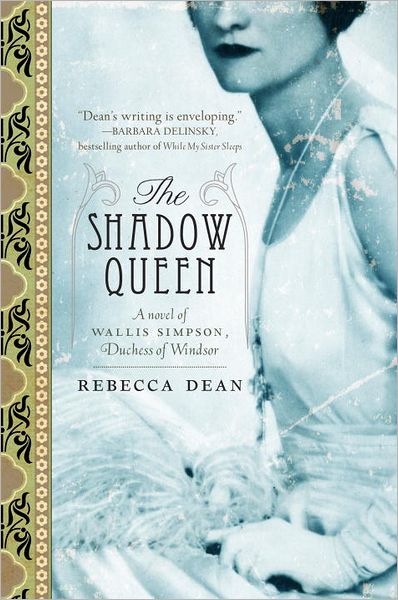 About The Shadow Queen

Set against a background of high society, royal circles, and diplomatic intrigue, THE SHADOW QUEEN: A Novel of Wallis Simpson, Duchess of Windsor by Rebecca Dean, the acclaimed author of previous historical novels Palace Circle and The Golden Prince, features one of the most fascinating and controversial women of the 20th century. Scores of biographies, movies (including the latest from Madonna, W.E.), and plays have been written about Wallis Simpson, the American socialite, for whom Prince Edward, Duke of Windsor abdicated his throne in order to marry her, forever changing the course of British history, and yet she remains an enigma.

In THE SHADOW QUEEN we are introduced to the real Wallis (given name Bessie Wallis Warfield) who was born into a poor, disgraced, southern family and thought of by the relatives as the outsider, the poor relation. In order to be seen as the Southern belle she so desperately wants to be, she relies on the charity of her rich relatives, whose dearest wish is to alienate her from her poverty-stricken, but loving mother. These early childhood experiences forge steel into Wallis, and, a survivor on a grand scale with a charm and sassiness few can resist, she embarks on a life that takes her from being the mistress of men in Washington’s highest diplomatic circles, to risking her life as a U.S. spy in war-torn China.

Wherever she goes and whoever she is with, there is always in her pocketbook a newspaper clipping of Britain’s golden-haired, fairy-tale-handsome Prince of Wales. For millions of girls worldwide, Edward is the impossible, unattainable dream. Wallis, however, has never believed anything to be impossible or unattainable, and sets out to conquer the man who will very soon become the country’s king. A story based on impeccable research, we meet the woman for whom Prince Edward abdicated his throne. It’s a tale of loss, heartache, and the ultimate test of how far a Prince will go for love.

REBECCA DEAN is the author of The Palace Circle and The Golden Prince. She was born in Yorkshire, England, and lives in London with her husband and two dogs.

I have two copies of The Shadow Queen by Rebecca Dean to share with my readers. To enter…

This giveaway is open to US and Canadian residents only (no PO boxes) and I will draw for the winners on Saturday, August 18/12.  Good luck!