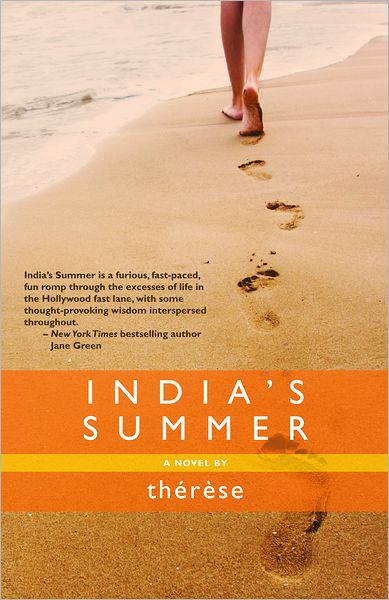 For your Friday enjoyment I have Therese, author of India’s Summer here at the blog with a guest post!  This book sounds like a fun and great read for the summer months and today you have a chance to win yourself a copy while enjoying this wonderful guest post from Therese…

I find it difficult to believe that India is a fictional character she has become such a part of my life. Once I had the outline for the plot, I created a Facebook page for her and within a few weeks she had more “friends” than I did. I had mixed feelings about this, but then she was single, young, beautiful and funny, so I had to get over myself.

I lived vicariously through her, upgrading her status regularly; how it was going with Adam, the gorgeous hot perfectly sculpted actor she was dating. I posted photographs of them running along the beach or at a party at Chateau Marmont. My friends would ask, “How’s India?” more often than they’d say, “How’s the writing going?”

India’s quest is driven by my belief in the importance of listening to the inner voice that tells us when it is time to make a shift; time to fight through our fears and take a leap. India has spent sixteen years teaching grade school in London. She is desperate to reinvent herself but has no sense of direction. When she takes a literal leap across twenty feet of burning coals, it becomes a metaphor for her life.

Ten years ago, on the last day of our family summer vacation, I walked alone along the ocean’s edge in Malibu. I waded ankle deep into the water and began to cry my heart out. I knew I didn’t want to go back to England. This was where I belonged. We flew back to London the next day, and within six months we had emigrated. It happened that fast.

I began sending long e-mails to my friends back in England, and soon I had a wealth of true stories larger than life. I also had two culture-shocked teenagers, and writing kept me relatively sane. Many of the women in India’s Summer are struggling parents trying to do the best they can for their kids.

Living life in the fast lane in Los Angeles, I learned quickly that nobody “has it all.” Behind the veneer of opulence and privilege is a world much like anywhere else. Many of our friends live their lives in the glare of the media. The reality is very different from how it is portrayed in the press. I wanted to write about my town in a way that shone a light on some of the universal issues that affect us all. I wanted to debunk the myth that this is simply Tinsel Town. Writing this has been a labor of love for me.

INDIA’S SUMMER by Thérèse is the story of India Butler, single and about to turn forty, who travels from London to LA to reinvent herself. In a world illuminated by the flashbulbs of the paparazzi, she discovers the true meaning of “having it all’ while spending the summer with her sister Annabelle, a famous Hollywood actress, and her brother -in -law, a legendary rock musician.

They welcome India into their opulent, fast-paced lifestyle, whisking her from fabulous fundraisers to parties each more opulent than the last. This does nothing for India’s confidence and she maintains a wry detachment until she begins dating Adam, a gorgeous A- list actor. In an attempt to appear more successful she lies to him about her career.

Disaster strikes and India is drawn behind the veneer of Hollywood glitz and glamor and into Hollywood’s private lives. As her illusions about the perfection of their LA lifestyle fade away, India has an epiphany about her own real talents. .
India is in her element until her new life in LA unravels. 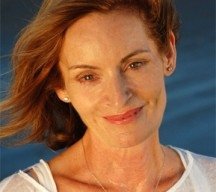 Thérèse taught English and Drama at a grade school in England, before launching her highly successful promotions company in London. She produced many events for an eclectic range of clients; from receptions at St. James’s Palace for Prince Charles to fundraising telethons with David Bowie. For many years she managed her husband’s career and in 2004 was given the title ‘Lady’ when her husband received a Knighthood from the queen.

Moving to Los Angeles ten years ago gave her the opportunity to devote more time to her writing. Having two teenage children gave her plenty of fodder for her first novel; How To Stay Upwardly Mobile When You’re Spinning Out of Control.

She hopes one day to wake up French, (not English) and be living in an apartment (with blue shutters) overlooking the fountain of L’Eglise San Sulpice, Paris.

I have one copy of India’s Summer by Therese up for giveaway to my US readers. To enter…

This giveaway is open to US residents only (no PO boxes) and I will draw for the winner on Saturday, August 18/12.  Good luck!