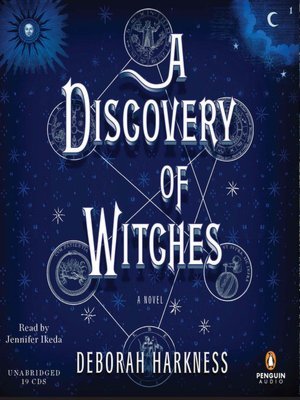 A Discovery of Witches by Deborah Harkness will most definitely be a favorite of mine this year. I loved it! I listened to it on audio and it is very well done by the narrator Jennifer Ikeda – she is a fantastic and makes listening to this book extremely enjoyable! This audio was 23 hours or so and it held me spellbound (no pun intended) the whole time. I was so engrossed in it most of the time that I barely noticed anything going on around me. Now I do have to say that I already love books having to do with witches and vampires and all that good stuff so it’s really no surprise I enjoyed this one so much.

Diana Bishop is a descendant of powerful witches of which she would much rather not be a part of. You see Diana is a direct descendant of the first woman to be executed in the Salem Witch Trials. Because of this and her parents dying apparently because they were too powerful she made the commitment to live as a human, not a witch. So it’s a bit of a surprise when she finds that she has managed to unlock a manuscript that she had requested, Ashmole 782, that has been lost for more years than anyone can count. Another problem, this manuscript is being searched for by almost every creature possible and now their attention is turned on Diana.

Now, not all the creatures are bad. There is the very handsome and sexy Matthew Clairmont who is a very old vampire and he has also shown an interest in Ashmole 782 as he’s doing his own research. At first Diana is very wary of him. Vampires certainly have never been trusted by witches before but this vampire actually seems to be trying to protect her. As she begins to trust him more and more, they begin to work together to try and get a hold of the manuscript again. However danger lurks all around Diana and they have to bring together both of their powers to keep her safe.

There are so many aspects to this novel; much more than can be covered in a simple review. For me, it has everything I like in a story like this: witches, vampires, demons, spells, lots of adventure and even a bit of romance. The only thing that may irk some readers or listeners is that when you come to the end, you will look up and say – noooooo – it can’t end this way! Well it can and does but that’s because there is a second book out in the trilogy and lucky for me and the rest of us, Shadow of Night is already out. I have already started Shadow of Night and I’m just as hooked with the second book as the first!  A Discovery of Witches is a fantastic novel and one that comes highly recommended by me if this kind of genre is your thing!